Angela Sutherland  - AncientPages.com - Birds have always had an important place in the mythologies of many cultures around the world. Almost all beliefs of ancient people have myths and legends associated with these mysterious creatures that could be very close to both humans and gods.

Birds have symbolized the higher realms, as shown in many myths and legends. 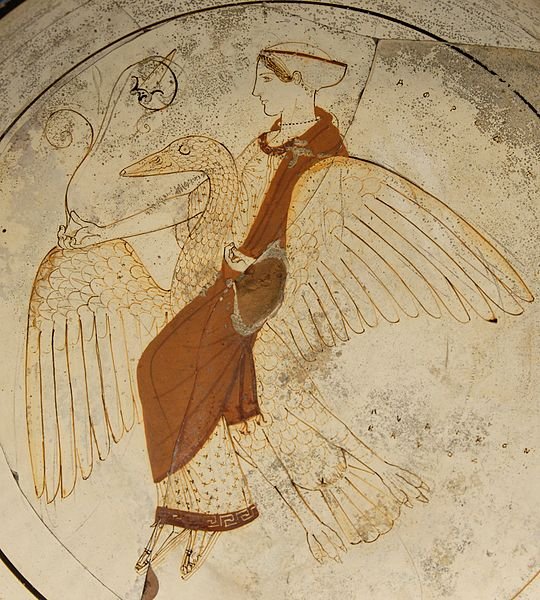 Aphrodite on a swan. Tondo from an Attic white-ground red-figured kylix. From tomb F43 in Kameiros (Rhodes). Credit: Marie-Lan Nguyen - CC BY 2.5

The Greek goddess, Aphrodite is closely associated with different types of waterfowl, including a beautiful swan, due to her connections to the sea. On the other hand, the swan is closely connected with the ancient motif of the winged phallus, and the two emphasize the goddess's role as the protector of love affairs.

In the beliefs of the Ibans (or Sea Dayaks) on the island of Borneo in South East Asia, the first beings were the spirits Ara and Irik, who appeared in the disguise of birds. Traveling through the cosmic waters, they produced two eggs and created a sky from one and the other, the earth.

Birds Embodied Spirit Of Creation And Symbolized Birth And Death

A beautiful celestial Hamsa (or White Swan) in ancient Sanskrit texts is the Vahana (vehicle) of Lord Brahma and Goddess Saraswati. In Hinduism, this bird embodied the spirit of creation.

Morrigan, for example, whose name translates to "great queen" or "phantom queen" was the Celtic goddess of war. She represented the circle of life, was associated with birth and death, and appeared as a crow flying above the battlefields.

Also, in other mythologies, the raven - an intelligent bird, a symbol of providence, wisdom, and prophecy - was often understood as a harbinger of death.

And now, we go to the Greek myths and legends, in which the god Zeus, in the guise of a swan, seduces (or rapes) Leda, an Aetolian princess who became a Spartan queen. As a swan (symbolizing a phallic association), Zeus fell into her arms for protection from a pursuing eagle, which is a mighty bird that usually carries Zeus' most potent weapon and his attribute - lightning.

The North American Indians depicted the raven as a hero and considered him a symbol of the Creator and, therefore, a powerful protector of humankind. Myths tell that the bird made the Universe and discovered and looked after the first man on earth.

An illustration of the god Odin with his two ravens Huginn and Muninn, from an Icelandic 18th-century manuscript. Credit: Public Domain

Odin (Woden, Wodan), the god in Norse mythology is associated with the raven, and he had two raven companions Hugin och Munin. However, the eagle was his great symbol due to associations with the heavens, magic, and war. We remember that Odin, in the guise of an eagle, decided to recover the honey of divine inspiration that was stolen from the gods stolen from them by the giants. He did it and flew back to Asgard.

Birds In The Aztecs' Calendar

Many birds are included in the Aztecs' famous calendar when the week consisted of thirteen days.

The first two days were under the care of the hummingbird; the third was a pigeon, the fourth quail, the fifth crow, the sixth owl, the seventh butterfly, the eighth eagle, the ninth turkey, the tenth also owls, the eleventh macaws, the twelfth quetzal, and finally, the thirteenth parrots.

Birds As Spiritual Mediators Between Humans And Gods

Birds were regarded as physical and spiritual mediators between the world of men and the heavens.

The holy bird Garuda is one of the fascinating figures in the Hindu pantheon. Garuda, not a god himself but half-man, half-bird, and the enemy of the serpents (nagas), was often depicted seated by the god Vishnu.

In Hindu beliefs, his wings chant the Vedas as he flies around the heavens. 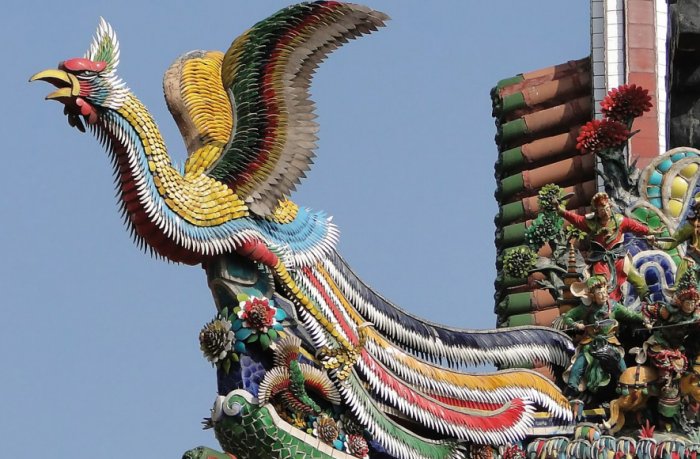 A Fenghuang on the roof of Longshan Temple in Taipei. Image credit: Bernard Gagnon - CC BY-SA 3.0

Birds were also highly revered by shamans that belong to Evenks - native to Siberia and Northeast Asia – who wanted to fly to the land of spirits. To do it, they relied on the support of four birds: the swan that guided traveling shaman to the land of spirits, the crow that was their guardian during trance, the eagle, the defender of the soul from evil spirits), and finally, the woodpecker which possessed the power of healing.

In China, the Phoenix's appearance (Feng Huang) usually announced the birth of the sage. Feng Huang, whose depictions have appeared in China for over 8000 years on jade and pottery motifs, is a powerful mythological creature with deep symbolism. Its body represents the celestial bodies, while the head is the sky, the eyes are the sun, the back is the moon, the wings are the wind, the feet are the earth, and the tail is the planets.

The flight of the human soul to the world of the dead occupies an important place in the beliefs of different peoples, and birds have a significant part in it.

In the beliefs of the Navajo people, the soul takes on the form of an owl after death, and in South America, a hummingbird.

In the mythology of the North American Indians, the thunder heard during the storm was caused by the wings' strokes of a giant Thunderbird. The Thunderbird was no ordinary bird. It was the spirit of the storm and a supernatural creature that was just as much feared as admired. Often described as a shapeshifter, it lived in a cloud, above the highest peak, the tribe could see o,r in a cave in the mountains. Various tribes tell slightly different stories about the magical Thunderbird, but all Indians feared the bird and tried not to anger it. 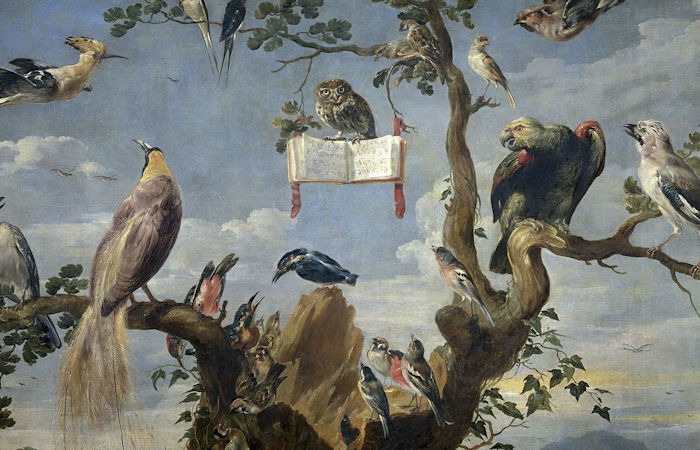 One thing, however, is sure: birds symbolize the upper world, and in ancient beliefs, they represent a bridge between people and the gods due to their ability to fly. It was believed these unique and mysterious creatures could deliver messages to the gods, and as such messengers, they were revered.

There are many other remarkable birds strongly connected with both humans and gods. Not all can be mentioned in this article, but we described them in a similar article soon.

Calleman C. J, The Mayan Calendar and the Transformation of Consciousness