A. Sutherland - AncientPages.com - Among the Aesir gods in Norse mythology, the supreme god Odin is frequently depicted sitting on his high seat, Hlidskjalf, in Asgard, the home of the gods.

Odin always has his two raven companions, Hugin (Huginn)  and Munin (Munnin), on his shoulders. 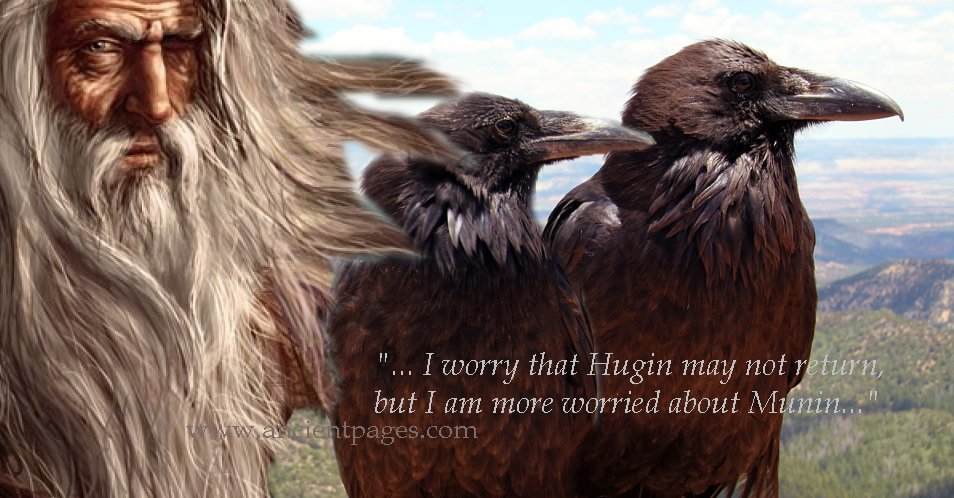 Hugin and Munin, "Thought" and "Memory," fly all over Earth each morning, returning with news, gossip, and secrets to whisper in his ear. Ravens are resolutely diurnal birds; however, a raven's cry at night signals the approach of the Wild Hunt.

Every day, Odin sends them out, and they fly across the world to seek important news and events. Odin surveys the worlds from Hlidskjalf and must-know reports of what is happening in all Nine Worlds.

In the evening, Hugin and Munin return to Odin's shoulders, and during dinner in Valhalla, they whisper all they have heard in his ears.

'Hrafnagaldur Odins' (Odin's Raven Chant), an obscure Icelandic poem in the style of the Poetic Edda, mentions that Odin is distraught one day. Idun, the wide of Bragi, god of music, poetry, and eloquence, has disappeared, and an untimely winter is coming from the north.

He sends his ravens to the underworld to investigate the disappearance of the goddess Idun. But the report of Hugin and Munin is enigmatic and unsatisfying.

Image credit: Odin with his ravens Hugin and Munin. From the 18th-century Icelandic manuscript SÁM 66, in the care of the Árni Magnússon Institute in Iceland.

Ravens are traditionally mentioned in Norse and other mythologies. They are linked with battles and death, not only in poems but also in reality. They are scavengers usually found among the corpses on the battlefield in the aftermath of war. In Norse mythology, a raven plays a double role as a sign of evil or good.

But Hugin and Munin, whom we meet on Odin's shoulders, symbolize his power to see his mind and thoughts into the future. Additionally, as symbols of the battlefield, they represent god Odin's welcoming to Valhalla, the Hall of Odin, in which the warriors slaughtered in battle – the Einheriar – can enjoy a happy afterlife.

Hugin and Munin are not common ravens; they have special abilities. These birds have fantastic observation abilities and can understand and speak human language. They can fly very fast, visit the Nine Worlds in only one day, and come back just in time for Odin's dinner. 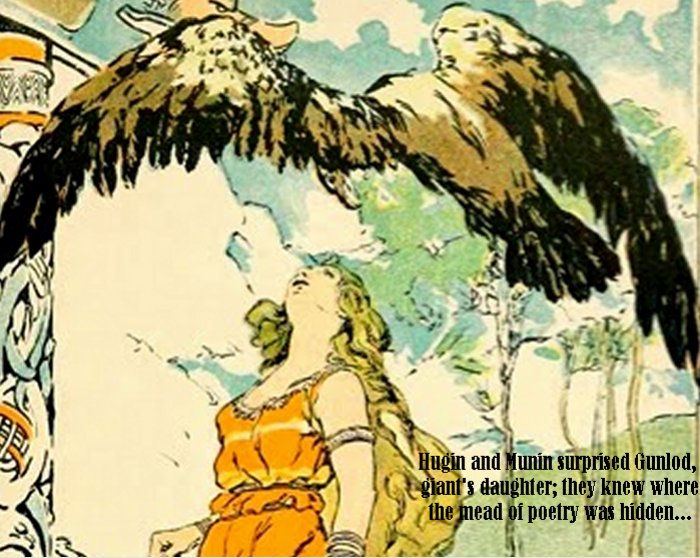 In one myth, giant Suttung entrusted the 'mead of poetry and inspiration' to Gunlod, his daughter, bidding her guard it night and day and allowing neither gods nor mortals to have so much as a taste.

To fulfill father's command, Gunlod carried the three vessels into the hollow mountain, where she carefully watched them. She was confident they were safe there, but she was wrong.

Gunlod did not suspect that Odin had discovered their place of concealment, thanks to the sharp eyes of his faithful ravens Hugin and Munin. The pair kept careful watch for possible danger or difficulties and observed everything that happened around them.

It would be unfair to say that Hugin and Munin are Odin's spies or servants; they are his wise advisers. Or perhaps they are a personification of the god Odin's intellectual powers or his 'fylgja' - animal spirits that accompany him for good or bad.

Every day, Odin was anxiously watching for their return at nightfall:

".... Hugin and Munin fly every day across the Gaping Ground.

I worry that Hugin may not return,

but I am more worried about Munin..." (Andy Orchard,  The Elder Edda: A Book of Viking Lore 'The Lay of Grimnir")