Ellen Lloyd - AncientPages.com - Native Americans have wonderful legends of a powerful and magnificent Thunderbird that was sent by the Gods to protect humans from evil.

When this huge, eagle-like bird soared the skies, one could hear its mighty wings beat with the sound of rolling thunder. Its eyes were burning like fire and caused lighting.

The Thunderbird was no ordinary bird. It was the spirit of the storm and a supernatural creature that was just as much feared as admired. Often described as a shapeshifter, it lived in a cloud, above the highest peak the tribe could see or in a cave in the mountains.

Various tribes tell slightly different stories about the magical Thunderbird, but all Indians feared the bird and tried not to anger it.

Legends Of Winnebago Indians: The Thunderbird Was A Shapeshifter

Winnebago Indians of the northern Midwest and Plains state believed that the Thunderbird possessed supernatural powers. The Thunderbird was a shapeshifter and could take the form of humans. Interestingly, the legendary falcon warrior or "birdman" is a common motif in Mississippian culture. It has been depicted with a beaked face on unearthed artifacts from Cahokia to Georgia.

In some traditions, Birdman is interpreted as a version of Red Horn, another heroic figure whose twin sons fought off a race of giants. 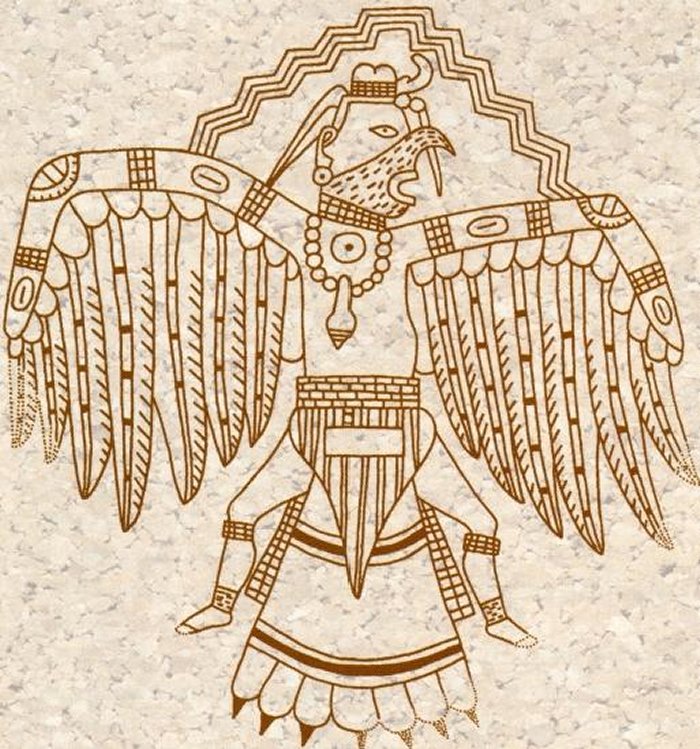 Scientists believe the Birdman was a warrior king, but it’s also possible this was the legendary Thunderbird.

According to Winnebago Indians, the Thunderbird was able to manipulate weather, affecting the winds and creating storms, lightning, thunder, and rain.

There was not just one Thunderbird, but many of them were often seen in the skies.

The Thunderbirds were enemies with the Water Spirits and the giant birds used their lightning when crossing the waters, to protect them from the water spirits.

Legend Of The Passamaquoddy Indians: The Thunderbirds Were Men Who Could Transform Themselves Into Flying Creatures

The Passamaquoddy Indians who live in northeastern North America, primarily in Maine and New Brunswick have legends that confirm the Thunderbirds were shapeshifters.

According to the Passamaquoddy, the Thunderbirds were men who could transform themselves into flying creatures. Their legend tells that “Thunderbird is an Indian and he or his lightning would never harm another Indian. But Wochowsen, great bird from the south, tried hard to rival Thunderbird. So Passamaquoddies feared Wochowsen, whose wings Gluskap once had broken, because he used too much power.

In Native American mythogoly, Gluskap is a mythical hero who defeated evil sorcerers and demon followers.

Legend Of The Quillayute Indians: The Thunderbird Was Sent By The Great Spirit 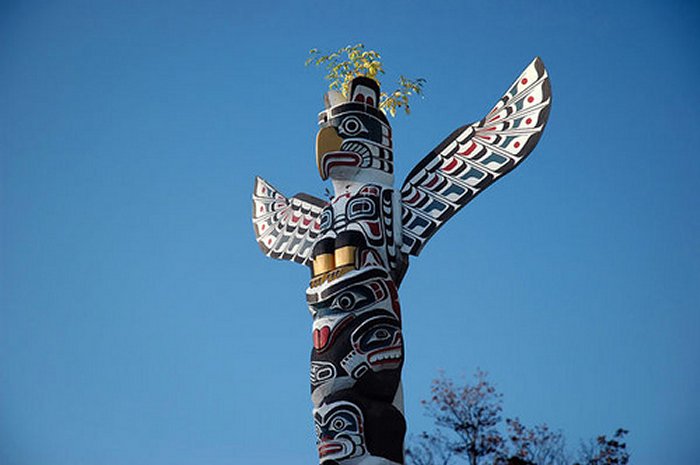 The story of the Thunderbird’s arrival is described in detail in the book Indian Legends of the Pacific Northwest written by Ella E. Clark:

“The people waited. No one spoke. There was nothing but silence and darkness. Suddenly, there came a great noise, and flashes of lightning cut the darkness. A deep whirring sound, like giant wings beating, came from the place of the setting sun. All of the people turned to gaze toward the sky above the ocean as a huge, bird-shaped creature flew toward them.

This bird was larger than any they had ever seen. Its wings, from tip to tip, were twice as long as a war canoe. It had a huge, curving beak, and its eyes glowed like fire. The people saw that its great claws held a living, giant whale. In silence, they watched while Thunderbird - for so the bird was named by everyone - carefully lowered the whale to the ground before them.

Thunderbird then flew high in the sky, and went back to the thunder and lightning it had come from. Perhaps it flew back to its perch in the hunting grounds of the Great Spirit. Thunderbird and Whale saved the Quillayute from dying. The people knew that the Great Spirit had heard their prayer.

Even today they never forget that visit from Thunderbird, never forget that it ended long days of hunger and death. For on the prairie near their village are big, round stones that the grandfathers say are the hardened hailstones of that storm long ago." 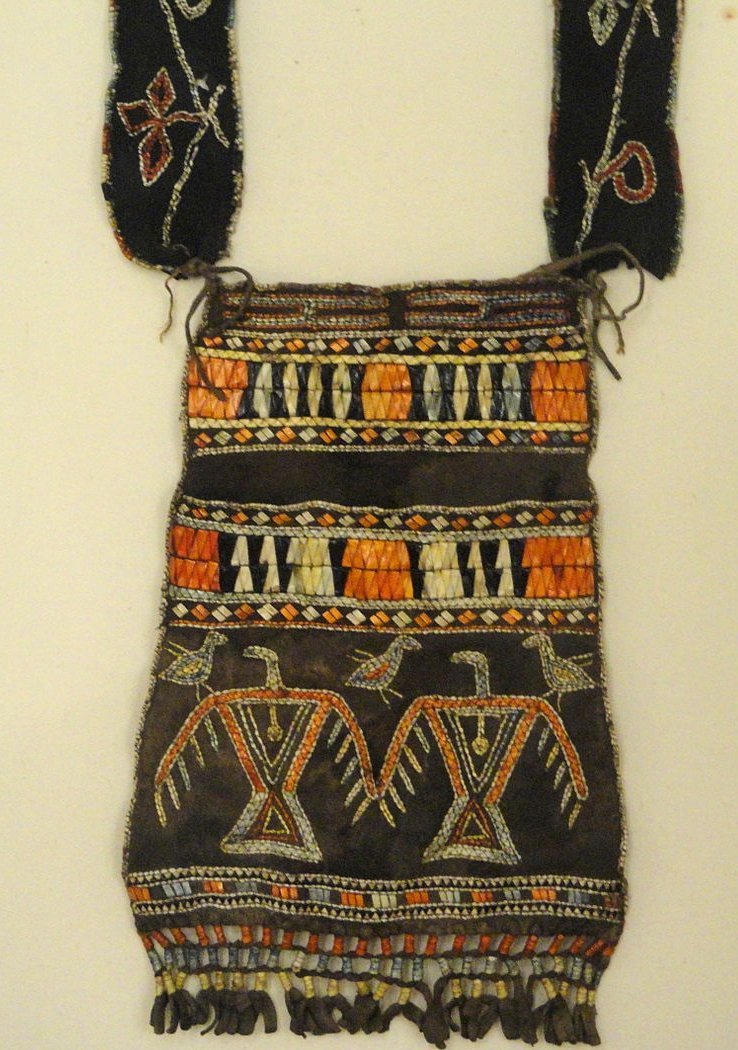 The Thunderbird is also described as a very large bird that makes fearsome noise.

“Thunderbird is a very large bird, with feathers as long as a canoe paddle. When he flaps his wings, he makes thunder and the great winds. When he opens and shuts his eyes, he makes lightning. In stormy weather, he flies through the skies, flapping his wings and opening and closing his eyes.

Thunderbird's home is a cave in the Olympic Mountains, and he wants no one to come near it. If hunters get close enough so he can smell them, he makes thunder noise, and he rolls ice out of his cave. The ice rolls down the mountainside, and when it reaches a rocky place, it breaks into many pieces. The pieces rattle as they roll farther down into the valley.

All the hunters are so afraid of Thunderbird and his noise and rolling ice that they never stay long near his home. No one ever sleeps near his cave. Thunderbird keeps his food in a dark hole at the edge of a big field of ice and snow. His food is the whale. Thunderbird flies out of the ocean, catches a whale and hurries back to the mountains to eat it. One time Whale fought Thunderbird so hard that during the battle, trees were torn up by their roots. To this day there are no trees in Beaver Prairie because of the fight Whale and Thunderbird had that day.”

One of the most interesting aspects of the legend is that the Quillayute mentions the Great Flood in their description of the battle between Thunderbird and whale.

All of the above-mentioned legends describe the Thunderbird as a very large, powerful creature that makes thunder and lightning. Myths from all across the world tell of magnificent birds that were sometimes known under a variety of names among ancient cultures.

Many mythological birds were believed to have had supernatural powers.

Adarna, a beautiful legendary bird of the Philippines was said to change it colors after singing seven songs. This magnificent bird could restore health, but also turn a creature into stone.

Ancient Chinese had interesting stories about a nine-headed bird (“Jiu Feng”), one of the earliest forms of the Chinese Phoenix

Mythical fiery bird Phoenix is mentioned in Roman, Greek or Egyptian mythologies. The incredible Phoenix is a symbol of Sun, immortality, rebirth, resurrection and eternal life.

This mythical creature has also its counterpart in China, Japan and India, and in each of these cultures, many appearances of Phoenix have been created but all of them have similar significance. They are also all alike.

Birds have always been mysterious creatures and close to gods, and the powerful Thunderbird was one of them…

The Short Encyclopedia of Hotcak (Winnebago) Myth, Legend, and Folklore