A. Sutherland  - AncientPages.com - Ziz is a giant bird found in Hebrew cosmogony and a creature that belongs to the celestial sphere. Its head touches the sky, and its feet rest on the ocean's floor. 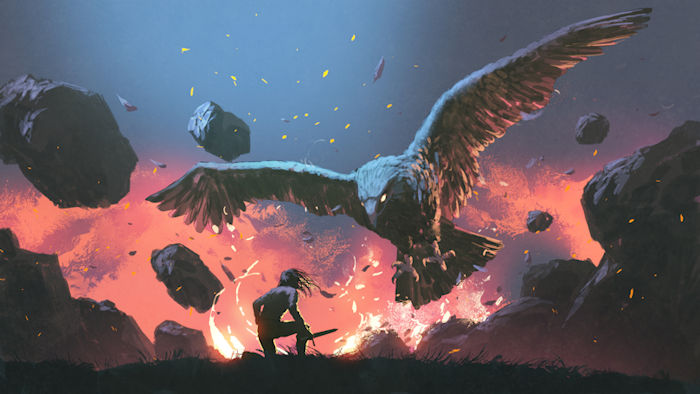 According to old accounts, the bird was made by the Creator of fire, light, and water mixed with mud, and it was given a similar appearance between a dragon and an eagle. It was sometimes depicted with the face like a rooster.

A griffin-like gigantic bird from Jewish mythology is known as Ziz. It is a powerful mythological creature, part eagle and part lion. When the wings of Ziz are spread, they can easily obscure the Sun.

Howard Schwartz, an author of "Tree of Souls" calls Ziz the embodiment of fate, and according to the Jewish apocalyptic, Ziz will be killed by the Messiah and, like Leviathan and Behemoth, the creatures served to the righteous at the great feast at the End of the World.

In the Messianic Banquet, Ziz, along with Leviathan and Behemoth are represented metaphorically. Ziz is the primordial creature that rules the sky, while Leviathan, the water monster, is the primordial ruler of the seas, and Behemoth, the terrestrial beast, has power over the Earth. The most famous appearance of Ziz is when the gigantic bird is part of the feast.

In this way, the three symbolize the entire living environment: land, water, and air. 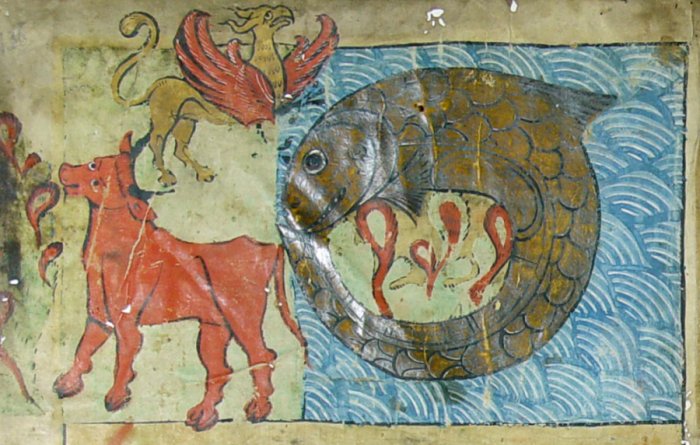 Clockwise from left: Behemoth (on Earth), Ziz (in sky), and Leviathan (under sea). Source

Scholars sometimes compare the monstrous Ziz to the Sumerian Anzu and the ancient Greek Phoenix.

Ziz is known in many mythologies, but first of all, it has its prominent place in Jewish beliefs. For many, Ziz symbolizes good omens and hope, but it is related to disease, bad omens, and death in some cultures.

The creature's size is comparable to the Leviathan, sometimes compared to Vrtra (a Vedic serpent or dragon in Hinduism, heroically killed by the God Indra, or Jörmungandr defeated by Thor in  Norse mythology. According to another tale, the egg of Ziz, which fell to the ground, swamped sixteen cities and destroyed three hundred huge cedar trees. However, the Ziz protects his eggs by placing them carefully in the nest not to harm the man.

There is an ancient Hebrew story of how on one occasion, during a sailing trip, a group of travelers saw a bird standing in the water, which covered only its feet. Its head touched the sky.

Looking at the bird, they thought the water wasn't deep and wanted to bathe but were warned by a voice from the sky, saying of deep water in the area.

They also learned that this bird is Ziz, and its gigantic wings protect the Earth from the storms of the south, and only thanks to them, is the Earth able to resist the blowing winds.

In "Hebrew Myths" by Robert Graves and Raphael Patai, we read that

"the Ziz is so named because his flesh has many different flavours: tasting like this (zeh) and like this (zeh). He is a clean bird, fit for food, and capable of teaching mankind the greatness of God. All birds, including the Ziz, their King, were created on the Fifth Day from marsh, and thus rank between land and sea-beasts.

But if God had not given the weaker birds a merciful dispensation, they could never have held their own against eagle, hawk and other birds of prey; for in the month of Tishri, He commands the Ziz to lift his head, flap his wings, crow aloud, and fill birds of prey with such terror that they spare the lesser breeds…"