Ellen Lloyd - AncientPages.com - There is something special about swamps that attract your curiosity and at the same time send chills down your spine.

Perhaps it is the landscape that is frightening but beautiful nevertheless or maybe it’s the tales associated with these mysterious places. Swamps have long been a subject of fascination and wonder. 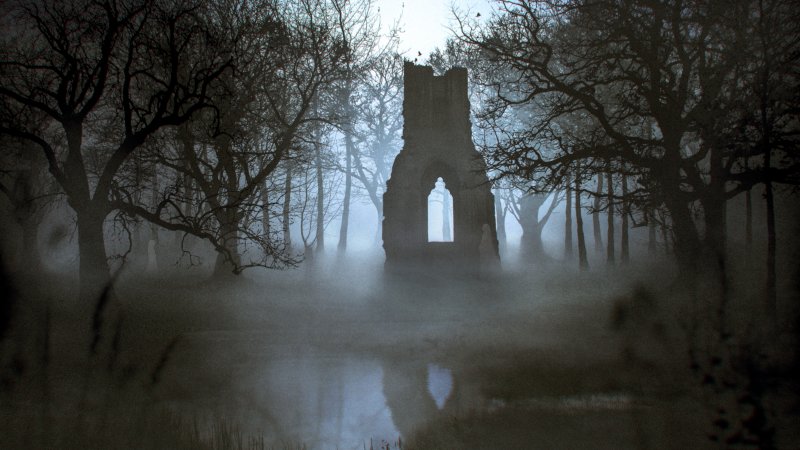 It is said there is a mysterious cemetery in the Great Dismal Swamp, but no one can find it twice. Credit: Adobe Stock - danielegay

The Great Dismal Swamp located on Virginia's southeastern border with North Carolina, between the cities of Norfolk, Virginia, and Elizabeth City, North Carolina is famous for its unique wilderness. The swamp encompassed millions of acres of marshy land, and the region is a true geological wonder.

Millions of years ago, the Great Dismal Swamp was under the sea and no one really knows how the swamp was formed, but today it is home to one of the largest Black Bear populations on the East Coast, subtropical birds, butterflies, bobcats, white-tailed deer, and other wonderful animals.

The swamp got its official name from Colonel William Byrd II, who first surveyed the area in 1728, but Native Americans were familiar with this marshland long before Byrd set his foot there. Colonel Byrd II was not impressed with the swamp and in his report, he described it a “horrible desert, with foul damps ascending without ceasing, corrupting the air, and rendering it unfit for respiration… having vapours which infest the air and causing ague and other distempers to the neighboring inhabitants.

Toward the center of it no beast or bird approaches, nor so much as an insect or reptile exists. Not even a turkey buzzard will venture to fly over it.”

There are many interesting and scary Native American legends about the Great Dismal Swamp. According to the Algonquian tribes who inhabited the area the swamp was once the dwelling place of a great firebird whose eyes burned like flames. It was a very dangerous bird that could easily snatch children and even adults carrying them back to their nest. These people never came back alive. However, one day the fire bird’s nest was flooded and whatever happened to the dangerous flying creature is unknown. Still, it’s an interesting legend because the creature reminds of the Thunderbird known to numerous Native American tribes. 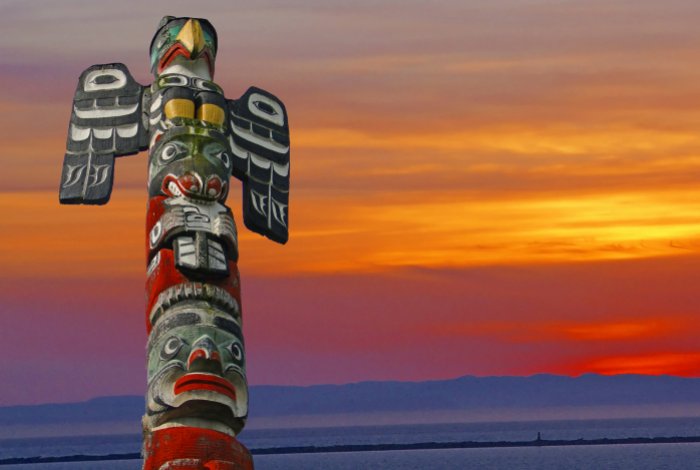 Native Americans say a great firebird had its dwelling in the Great Dismal Swamp. Could it have been the legendary Thunderbird? Credit: Adobe Stock - cascoly2

The legends of the Thunderbird tell that when this huge, eagle-like bird soared the skies, one could hear its mighty wings beat with the sound of rolling thunder. Its eyes were burning like fire and caused lighting. The great firebird describes by the Algonquian peoples also brings to mind Pamola, the mighty Thunderbird in myths of the Penobscot people of Maine.

The Chesapeake and Chowan tribes who are familiar with the Great Dismal Swamp have also a sad legend about the lady who died shortly before being married. She is believed to haunt the swamp, paddling in a white canoe and holding a firelamp that guides her darkness. This ghost, known as the Lady of the Lake inspired Edgar Allan Poe to write the poem “The Lake”.

Locals also tell stories of malevolent, shape-shifting witches who hide in the wetland and pray on innocent by-passers leading them astray.

Unexplained Encounters And Sightings In The Great Dismal Swamp

Unexplained encounters and sightings of mysterious beings are not limited to the past. People who visit the swamp keep reporting curious creatures that have been spotted in this region and there several sightings of unexplained lights seen in the skies over the region. Who are the phantom figures people see lurking behind trees?

When discussing ghost sightings one should not forget this swamp was once a refuge to wanted men and runaway slaves. Many who decided to hide in this grim wilderness lived under constant fear of being caught and people died of starvation here. Hermits and eccentrics have also sought refuge in the swamp’s deep forest and some of these people could have easily been mistaken for phantom on those few occasions they were spotted by tourists. 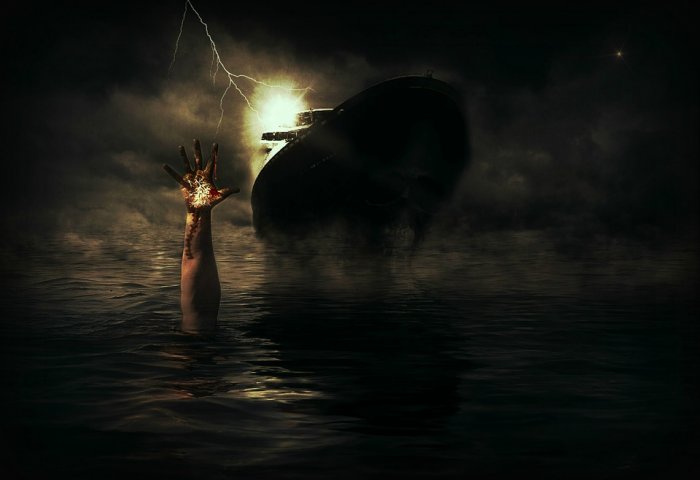 People say they hear the voices of the murdered crew in the Great Dismal Swamp. Credit: Public Domain

In the dense jungle around Lake Drummond, people have seen strange lights and heard eerie sounds. Is something unknown hidden in the lake? One story is repeated often. It’s about a French ship that was blown off course during a voyage in the seventeenth century. The French ship was filled with treasures, but an English war vessel was chasing the crew who had to abandon the ship and hide in the Great Dismal Swamp. Legend has it they took as many gold treasures as they could carry and buried everything in the region. There may be some truth to this story because several ancient coins have in fact been found in this area, making it a great place for treasure hunters of course.

The French sailors did not survive. They were caught by the Englishmen and killed. People say they often hear voices speaking in French near the lake. It’s believed these are the voices of the dead sailors guarding their hidden treasure.

The Mysterious Cemetery That Can Never Be Found Twice

One of the most perplexing stories deals with a cemetery that virtually vanished into thin air.  The incident took place in the 1930s when a young couple moved to the region. The man had “had gotten a job through the Works Progress Administration to survey drainage ditches surrounding the Great Dismal Swamp. He and his wife seemed to have a deep attraction for the mystic beauty of the swamp.

They often walked is paths and trails on weekends. One day, the young man was out walking alone while his wife stayed home tending to a sick child. He followed an abandoned and overgrown logging trail. Presently, he came upon a small family graveyard. He knelt down beside the ancient tombstones, dating from the late eighteenth century. He knew that his wife would enjoy seeing the old markers. So, as he backtracked, he carefully marked the spot where he had made his discovery.

The entrance was next to some live oak trees, past a clump of three hollies and the stump of an old pine that had been splintered by lightning. He then counted his paces back along the logging road. The following Sunday, he excitedly took his wife down the trail. He passed the stump and the holly trees and turned into where he had found the tombstones. There was nothing there! Instead, the couple found only an open, clear glade. 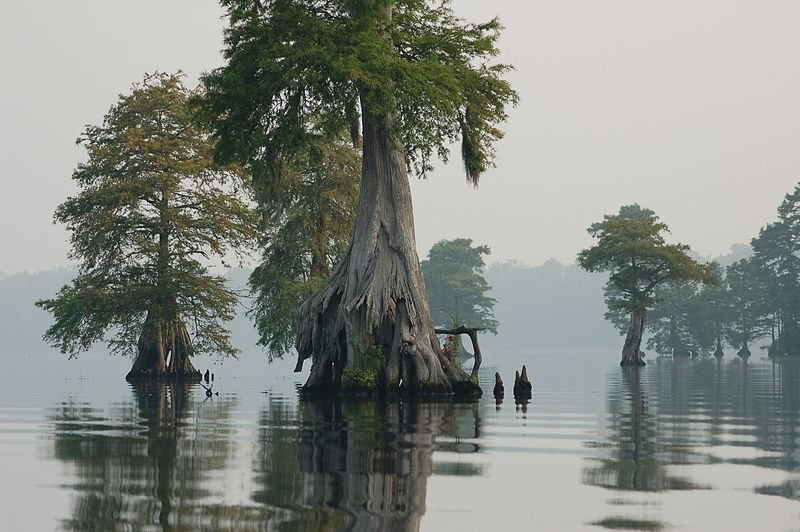 The man was thoroughly puzzled. He rechecked his markings. He was sure that this was the exact spot. They searched for hours, to no avail, and finally had to return home when darkness began to fall. The next day, the man went to Sam Smith’s general store and told Smith about what had happened. Smith smiled and nodded. He said that he had heard the same story many times. He told the man that if you go looking for the graveyard, you never can find it. It may be there, because a few people have stumbled upon it, Smith said, but no one has ever found it twice,” L.B. Taylor Jr. writes in the book Ghosts of Virginia's Tidewater.

When it comes to encounters with unknown cryptids, the Great Dismal swamp never disappoints. There are numerous reports of encounters with ape-like creatures, frightening canids, and man-like monsters.

Whether you are an adventure seeker, paranormal researcher, or admirer of beautiful nature remember to watch your steps when you visit the Great Dismal Swamp. It is one of the largest swamps in North America and it’s easy to get lost, so perhaps it may be wise not to go on your own.

One should also keep in mind that many people have their sense of direction, and compasses tend to malfunction in the vicinity of the Great Dismal Swamp. There have been some speculations this phenomenon can be the result of magnetic fields that are thought to be hidden under the deep layers of peat, but this has not been confirmed.

Pollin, Burton R. "Edgar Allan Poe and John G. Chapman: Their Treatment of the Dismal Swamp and the Wissahickon." Studies in the American Renaissance, 1983, 245-74.