Ellen Lloyd - AncientPages.com - There are several strange underwater formations in Canada and America that for some reason have never been properly examined. Could these submerged ruins offer evidence of a long-lost, unknown civilization that was present in the region?

We will start by asking a simple question: Why have these underwater formations been ignored by experts? Many will argue there is nothing here to investigate because these are only natural formations and there is no reason to suspect they are man-made. This could naturally be true, but how can we determine this without proper examination conducted by an underwater expedition? 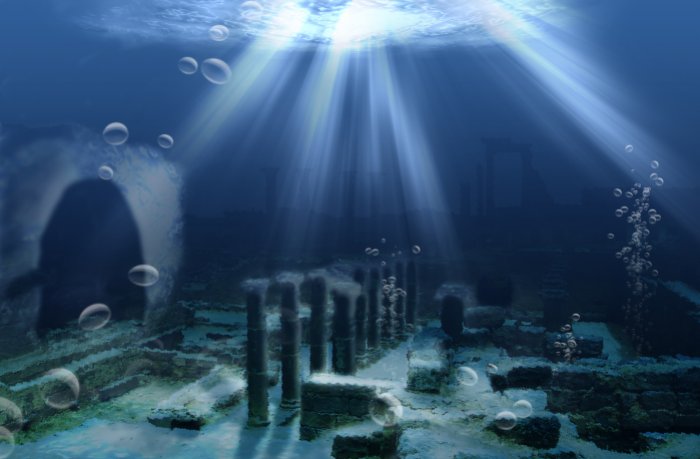 There were some attempts to examine the baffling underwater formations, and there were also scientists who stated these were submerged structures created by unknown people thousands of years ago. Still, after the first discovery, the underwater structures were quickly forgotten.

Anyone interested in ancient history will know there are several puzzling ancient man-made underwater structures discovered world-wide that show us there is still a lot we don’t know about our past.

For example, archaeologists exploring Lake Huron, one of the five Great Lakes of North America have found traces of an ancient lost civilization that is twice as old as Stonehenge and the Great Pyramids of Egypt.

It all started when U.S. radar suddenly detected an odd structure at the bottom of Lake Huron. This was the first piece in a puzzle that led to a 9,000-year-old discovery. 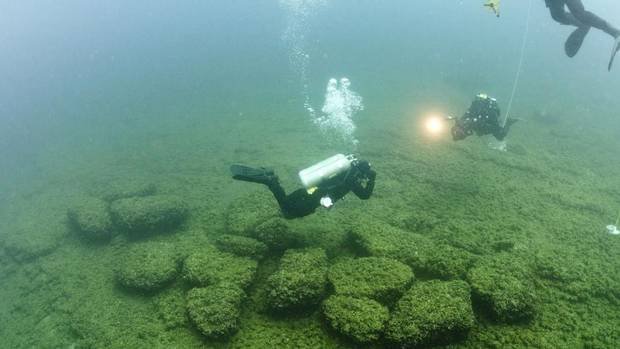 Underwater archaeologists found what was once a dry land corridor connecting northeast Michigan and southern Ontario. Scientists say the main feature, dubbed the Drop 45 Drive Lane, is the most complex hunting structure found beneath the Great Lakes to date.

The 9000-year-old, limestone structure is comprised of two parallel lines of stones that lead to a cul-de-sac lined with natural cobble.

According to Dr. Lisa Sonnenburg, a geoarchaeologist at the University of Michigan sediment at the bottom of Lake Huron shows several signs that point to the existence of a submerged hunting complex that is more than twice as old as Stonehenge and the Great Pyramids of Egypt.

Artificial Underwater Structures Beneath The Waters Of Rock Lake, Wisconsin

The submerged ruins found beneath the waters of Rock Lake in Wisconsin have been completely forgotten.

Although the lake is at least 10,000 years-old, no scientist wanted to seriously consider the possibility that 3,500 years-old ruins could actually exist at the bottom of the lake. Yet, something is definitely resting there.

The first known discovery occurred in the early 1900s when Claude and Lee Wilson announced that their oar struck the apex of a pyramid about six feet below the lake's surface. 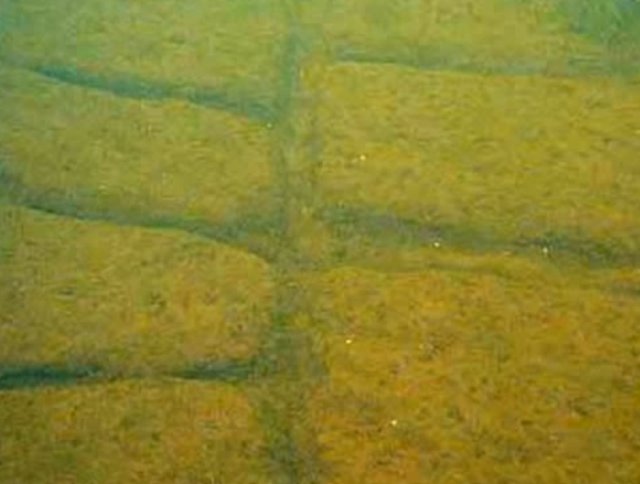 Several attempts were made to locate the unknown structure, but they all failed.

Many years ago, Charles E. Brown, director of the Wisconsin Historical Museum and Earnst F. Bean, a geology professor became interested in this discovery.

The divers were asked to investigate the underwater ruins, but their results could not offer anything that would shed more light on the mysterious submerged structures.

People who participated in the investigation of Rock Lake were ridiculed.

It was said they were chasing a fantasy and the entire project was a waste of tax money. 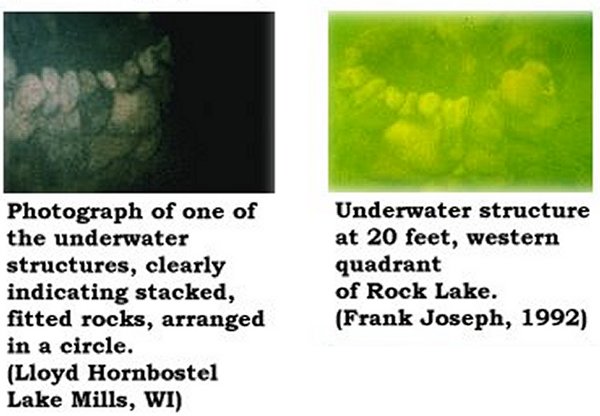 There were more expeditions, and in 1937, Alex Max Gene Nohl, an engineer and diver from Massachusetts made an incredible discovery. While diving he successfully located a triangular-shaped structure. The public was now eager to learn more about this fascinating discovery, but there was one problem. No archaeologist showed any interest or willingness to investigate Wisconsin's underwater pyramid.

It took many years before the mysterious underwater structure of Rock Lake were examined again.

In 1987, Frank Joseph, an American author became interested in the underwater pyramid. Together with other scientists, he completed a side-scan sonar study of the lake floor. The scientists managed to observe a number of unusual-shaped structures along a submerged beach. Side-scan sonar reading clearly indicated several artificial structures beneath the surface of Rock Lake.

According to Frank Joseph, beneath the waters of Rock Lake lie at least ten structures! Two of them have been mapped and photographed by skin divers and sonar. One of these structures which has been named the Limnatis Pyramid has a base width of 60 feet, a length of about 100 feet, and a height of 18 feet. It is a truncated pyramid.

Who were the ancient builders of the underwater pyramid resting at the bottom of Rock Lake, Wisconsin?

A mysterious ancient underwater structure hidden beneath MacDonald Lake reveals traces of a lost civilization present in Ontario, Canada thousands of years ago. Who were these people? Where did they come from and what happened to them?

At first, divers who examined the puzzling underwater structure thought it was a geological formation, but later studies it was a manmade object. The puzzling stone structure was found at a depth of 40 feet (12 m) below the surface. It consists of a massive 1,000 lb (453 kg) elongated rock with an almost completely level surface resting on 7 baseball-sized stones, which in turn sits on a huge several thousand-pound slab on top of a ledge.

It seemed the stone could not be one of the rocks scoured by glaciers. Image credit: Norman Muller

Geologists and archaeologists were puzzled by ancient structure’s straight edges and lack of roundness. It seemed the stone could not be one of the rocks scoured by glaciers.

An underwater archaeologist who examined the structure took photos of the stone. He concluded that the existence of 3 shims was proof that the assembly of now seven rocks was the result of human activity and not a fluke of nature.

Divers continued to examine the mysterious underwater structure, searching for any signs of the use of tools, decorative images or other irregularities but found none of the kind. The thick layer of silt covering the vertical surfaces suggested that no human had touched the stone for a very long time.

There is geological evidence that Eastern North America experienced a dramatic drought between 9000 and 7000 BC. Conditions were so dry during that time that lake levels in the Great Lakes were up to 50 meters lower and inland lakes, like McDonald Lake, which were still fed by spring melt and summer rainwater, were assumed several dozen feet lower than their present water levels.

However, this does not answer the question of why during a time when so few people inhabited Ontario a small group would deliberately select remote MacDonald Lake for a stone cairn, especially such a large, elaborate one.

Biological data shows that McDonald Lake is home to an ancient, glacial relic lake trout, which had survived several bouts of glaciation and retained unique features, which allowed it to survive, where other fish had perished. This suggests that McDonald Lake, in prehistoric times was not a lake, but part and north-westerly end-point of an ancient river system which, for millennia, funneled glacial meltwater south into what was then mighty Lake Agassis.

The special environmental conditions the place had to offer in ancient times could have been the reason why our ancestors decided to live in the region.

In addition, they also found the ruins of ancient buildings for about a mile below the sea and considered them to be Atlantis. 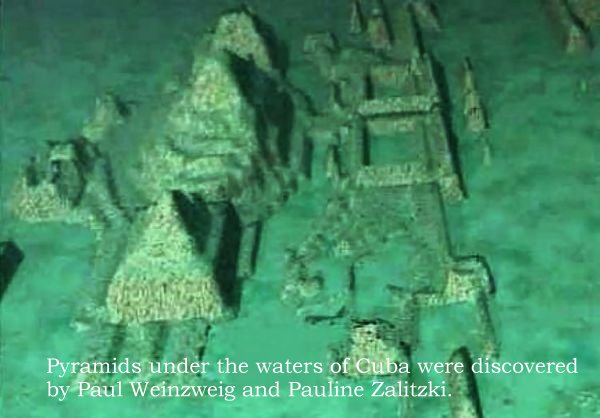 When examining the structures, the two scientists used submarines and concluded that several sphinxes and at least four giant pyramids plus other structures are located within the boundaries of the legendary Bermuda Triangle.”

Granted that archaeological discoveries made on the surface are highly significant, but we cannot help wondering how many magnificent structures built by long-lost, completely unknown civilizations are resting at the bottom of oceans and lakes worldwide.