Due to their impractical size and shape these ancient helmets were not used for war or fighting. Instead, the Viksö helmets were deliberately created for various religious ritual purposes. The elaborate carvings on the helmets have symbolic meaning and the objects are rich in religious meaning and most likely related to myths about holy animals and divine power.

Scientists think these unique Bronze Age artifacts functioned both as helmets and masks. The Viksö helmets are unique.

Ancient Pages has previously presented several truly bizarre and fearsome ancient helmets, but the Viksö helmets differ a lot and were not designed to scare any enemy.

Some of them are equipped with eyes and a hooked beak. The hooked beak of a bird of prey and the large, round eyes perhaps indicate that it is an owl. 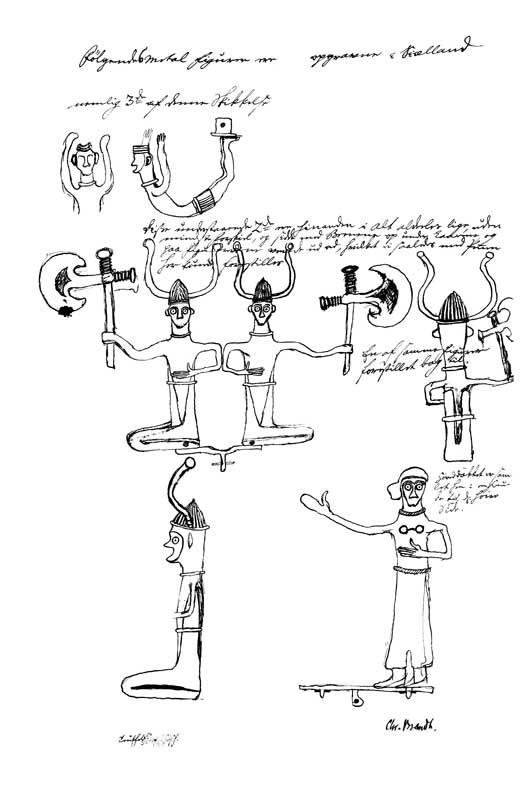 Feathers from a crane or another large bird could be stuck in to the two small cylindrical fittings and in the ends of both horns.

The Bronze Age people had a reason to incorporate all these different animals into the design of the helmets, but what is was we still do not know and we can only speculate.

We also know that Sun worship was important and the picture of the Sun Ship on the helmets from Viksö refers to a central myth in Bronze Age religion.

Along the edge at the base of the helmets are stylized ship pictures made out of a row of small hammered dents. On each helmet are two ships, which stretch from the front to the back of the helmet. The ship’s prow is furnished with a water bird – duck, swan or grebe. This is the Sun Ship, the most important religious symbol of the Bronze Age. 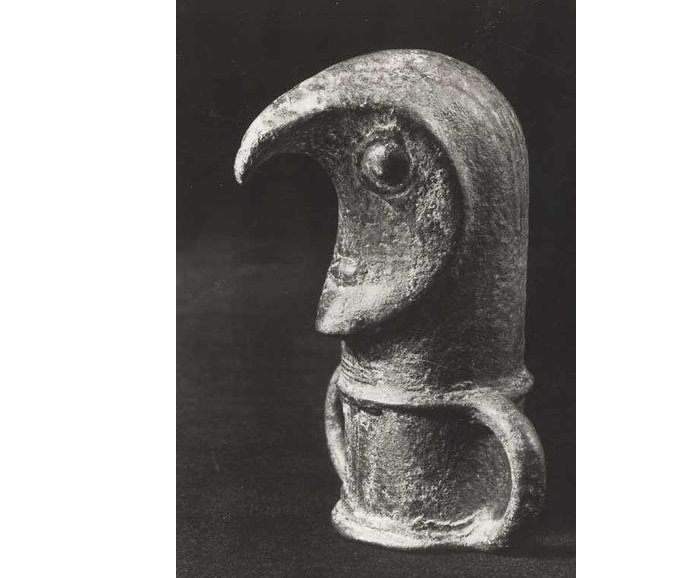 The water bird had a special significance in Bronze Age perception of the sun’s continual cycle. The bird could follow the sun and its light in all places and environments. It could dive under water, swim, walk on the earth and fly in the sky.

The symbol of the Sun can often be found in Norse mythology. This is the myth of the sun’s eternal journey round and round, with the help of the Sun Ship. The other important helper on this journey is the sun horse, which pulls the sun across the sky.

The horse, which is the noblest and holiest of all animals, is represented on the helmets in the form of a mane. The ox, represented by the horns, can symbolize strength and wealth. In many religions the ox is also a heavenly symbol. 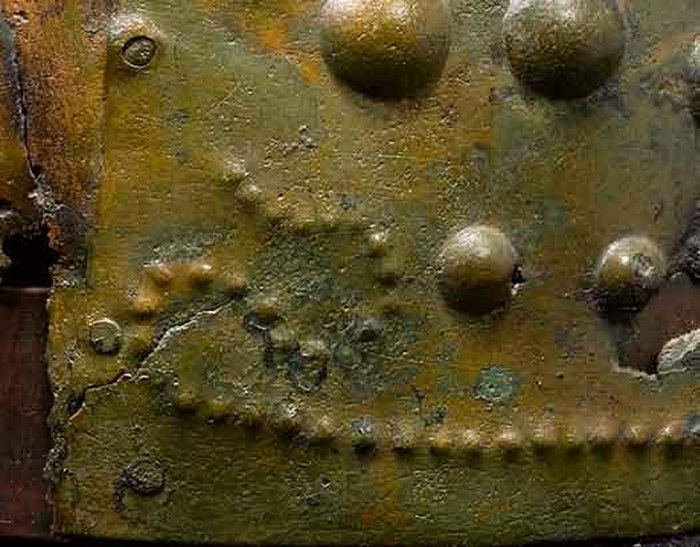 Along the edge of the helmets stylised ship pictures can be seen. The prows resemble water birds.

The bird of prey, which constitutes the masks on the helmets, may also be connected to the myth about the sun’s eternal journey. If it is an owl, this probably relates to night-time. Finally the added feathers from the crane, which can also be seen in Bronze Age rock carvings from Sweden, may be connected to the changing of the seasons. The crane is the largest and most beautiful of the migratory birds.

Truly Bizarre And Most Fearsome Ancient Helmets Ever Seen

Mystery Of The Horned Serpent In North America, Mesopotamia, Egypt And Europe

Helmet Of Meskalamdug – Sumerian King Of The First Dynasty Of Ur

Two small intriguing figurines were discovered in the 18th century at Grevensvænge, near Næstved, Denmark.  It is assumed that the figurines were originally part of an ensemble arranged on a ship. 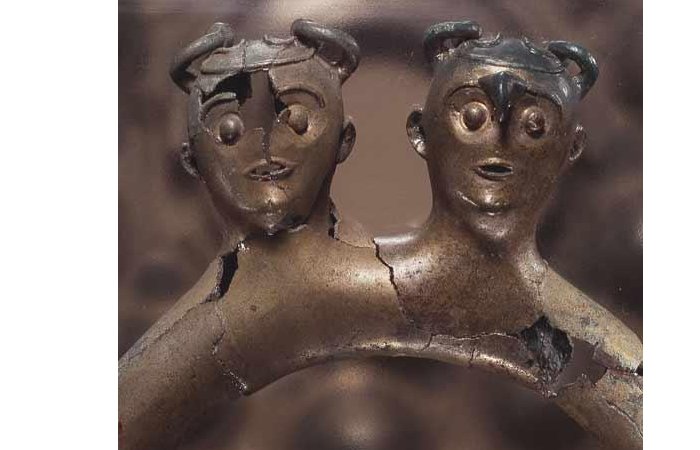 The horned helmets of two men's heads on a horse collar from Fogdarp in Scania, Sweden, bear a strong resemblance to the Viksø helmets. Among others, the two men are furnished with curved beaks on their foreheads. Late Bronze Age.

The men wear helmets with curved horns like those from Viksö. Only one of the figures is preserved today, but old drawings of the find show that the two men originally knelt down besides each other and each had a large ornamental axe in one hand. 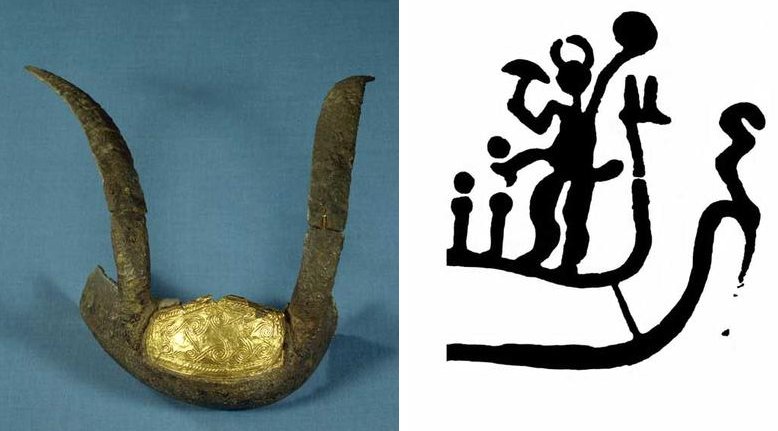 Left: mask from The Early Bronze Age, furnished with bronze horns and golden application, was found at Hagendrup in western Zealand.
Right: Part of a rock carving from Sotetorp, Bohuslän in Sweden. The man on board the ship wears a horned helmet.

The same motif, of kneeling men wearing helmets and carrying axes, is depicted on a razor from Vestrup in south Zealand. The men are sitting in a boat. 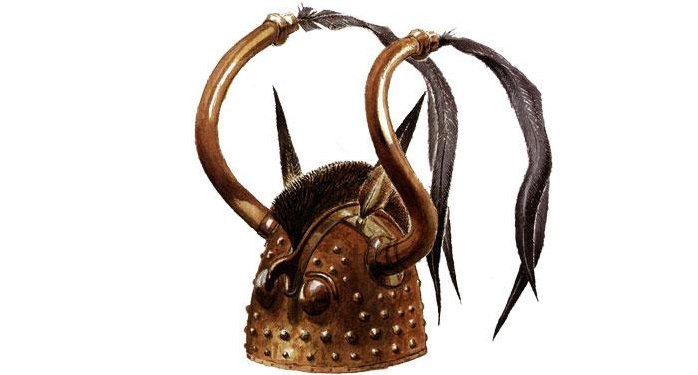 This is how the Viksø helmets may have looked. Illustration by Anders Andersson.

Ships, helmets and ornamental axes were all used in connection with religious activities in the later Bronze Age. The combination of men with helmets and axes is also found on Swedish rock carvings. The warriors on the rock carvings from Sotetorp at Tanum in the Bohuslän area are helmet clad and carry axes. They also have swords at the hip and hold a round object in the other hand. It is possible the round object is represents the Sun.

Both the twins motive and the cultic significance of the horned helmets, seems to have persisted into early Germanic culture. The kneeling warrior figures have been interpreted as the "Ashvins" type divine twins of early Indo-European religion, sons of the sky-god, known by the name of Alcis to Tacitus.