AncientPages.com - On May 23, 1430, Joan Of Arc was captured by the Burgundians, who sold her to the English.

She was captured by the Burgundians, who had allied with the British against the French King Charles VII (his coronation at Reims was secured by St. Joan of Arc in the previous year). 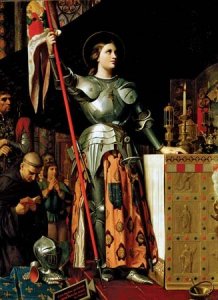 The following May, Joan attempted to raise the siege of Compiègne, located about 790 kilometers northeast of Paris.

She and her forces made attack on the Burgundian camp. Joan was cut off and was taken prisoner by the Duke of Burgundy, an English ally. He handed Joan over to the Bishop of Beauvais, who was also an English ally.

On January 3, 1431, she was passed on to Pierre Cauchon, bishop of Beauvais and she was to be tried by tribunal, which had been selected by Pierre Cauchon himself, and consisted of 10 Burgundian theologians, 22 canons of Rouen (all in the hands of the English), and some monks of different orders.

The interrogation of Joan of Arc began on February 21. Judgment was to be based on seventy different points, including charges that she indulged in divination, had prophetic dreams, was a sorceress, witch, and conjurer of evil spirits.

Eventually, these charges were dropped to twelve. 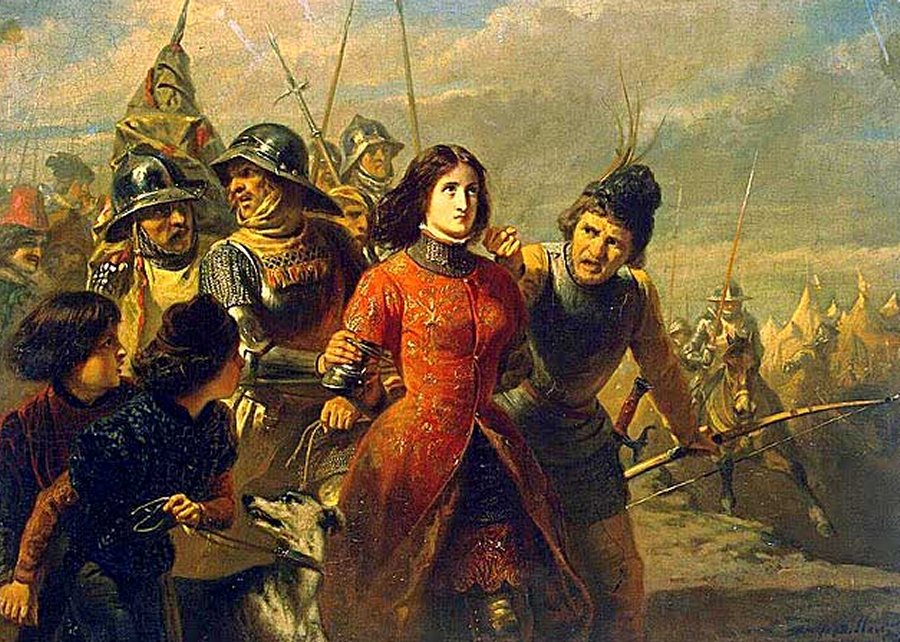 Painting by Adolphe-Alexandre Dillens of Joan of Arc Being Led Away after Her Capture on May 23, 1430

Her judges were of the opinion that her visions were worthless and denied her the gift of prophecy.

They also censured her for dressing in masculine clothing and for 'sinful pride'. Joan, namely, believed that she was responsible only to God and not to the church, which the judges represented.

This last was the charge that most incensed her accusers.

On May 23, Joan was taken to the cemetery of Saint-Ouen and sentenced to be burned at the pyre unless she submitted. Tired and worn out, Joan signed what was presented to her and was returned to her cell to serve life imprisonment.

A woman's dress was given to her but she either did not put it on or else, she returned to her men's clothing. On May 27, Cauchon found her so dressed and declared her to have relapsed. He handed her over to the English secular arm. On May 30, she appeared on the Old Market Square of Rouen, and she again was dressed as a woman.

There she was burned - about a year after her capture - for being a relapsed heretic.

Approximately 25 years after the burning, the case of St. Joan of Arc was re-examined. She was acquitted, declared innocent, and proclaimed a Catholic martyr.