Conny Waters - AncientPages.com - An object of black magic that dates back to the 1st century AD was discovered in Tongeren, a city located in the Belgian province of Limburg, in the southeastern corner of the Flemish region of Belgium.

The object in the form of a lead tablet was unearthed during archaeological excavations conducted by researchers in 2016. The tablet (or a curse tablet) measuring twelve centimeters, is, according to archaeologists, remarkably well-preserved. 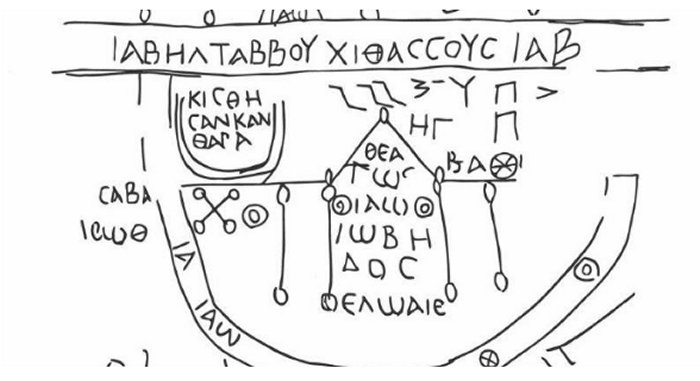 The tablets like this one were traditionally put in places like cemeteries or wells, were used to cast a curse on someone.

The tablet is in a remarkable state of conservation and carries around fifteen lines associating drawings and magic, Greek and Latin texts.

One of the peculiarities of this tablet is that it is flat when usually these curses were rolled or folded, according to ULB researchers.

Many researchers from several faculties have worked together to decipher this magic tablet.

The ULB team analyzed the magic and textual aspects, worked with the historical interpretation related to the artifact.

Also, the isotopic composition of the metal of the tablet was carefully studied. Daniel Demaiffe, from the Geochemistry Service - G-TIME - Faculty of Sciences, was able to determine that it was a local production: lead was extracted in the Eifel massif (East of Belgium or West of the 'Germany).

Despite its local origin, the Tongeren tablet has similarities regarding its form and structure with four curses on the lead from Tunisia or Greece. The common model of these five objects was probably transmitted by a manual of magic, possibly written in Egypt, copies of which circulated throughout the Mediterranean basin, and even to the northern reaches of the Empire.

The tablet thus provides a first-hand account of the circulation of men, ideas, and religious practices in the Roman Empire. It shows that the territory of modern Belgium was very early integrated into these networks.

The research results were published in the journal Latomus