Angela Sutherland  - AncientPages.com - “Those born with a birthmark, wolfish tufts of hair, or a caul on their head were believed to be werewolves.” 1

A man can become an exceptionally horrible creature, known in ancient folk and mythological beliefs as a werewolf. In ancient times, it was believed in the possibility of transforming man into an animal, and this shape-shifting phenomenon is mentioned in the mythologies and legends of the whole world. 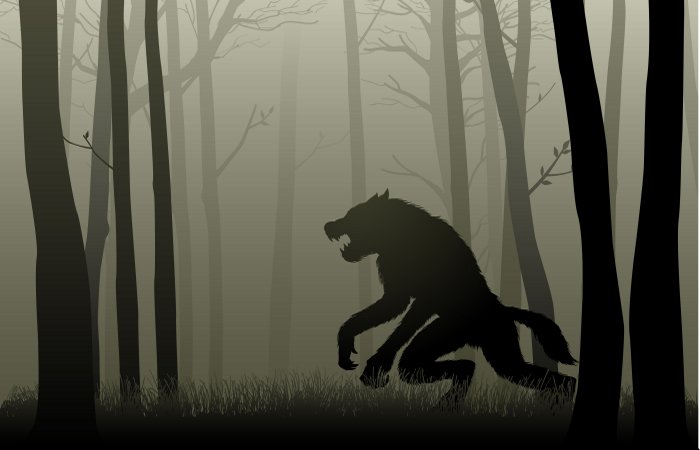 One such shape-shifting creature comes from Argentinean folklore and is known as a lobison (a 'werewolf'). During the full moon, the beast preys upon cattle and is, therefore, dangerous. Anyone who is bitten by one in its wolf form would become a lobison. Thus, when a seventh son is born, the child is destined to be a lobison.

In mythologies of ancient cultures, the werewolf was known under different names such as Slavic' vulcolaca', Polish wilkołak, Roman varcolac, and Greek mythology mentions' vrykolokas. In eighteenth-century France's folklore, a monstrous creature known as the Beast of Gevaudin was terrifying the countryside between 1764 and 1767. It looked like a long-legged, shaggy-coated hyena (a werewolf) with glowing eyes and was credited with the deaths of at least 100 people.

The werewolf's name may vary, but its characteristics remain the same. However, a werewolf creature exceeds wolves in strength, speed, readiness, and sensory perception. After the shape-shifting process, the werewolf is much more animal than human, although it is possible that this keeping many of its fundamental characteristics such as (knowledge, wisdom, and personality) intact.

In his book "Witches, Werewolves, and Fairies: Shapeshifters and Astral Doubles in the Middle Ages," Claude Lecouteux cites a manuscript of Nennius's Historia Britonum: 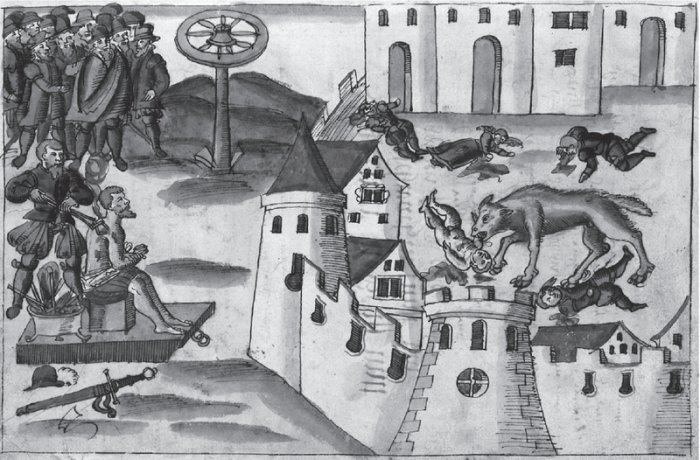 "There exist certain men of the Celtic race who have a marvelous power that they get from their ancestors. By a demonic force, they can, at will, take the form of a wolf with large sharp teeth, and often, thus metamorphosed, they attack poor defenseless sheep. But when people armed with sticks and weapons come toward them, they flee nimbly and cover great distances. When they are of a mind to transform themselves, they leave their human body, ordering their friends not to change their position or touch them in any minor way whatsoever, for if that were to happen, they would never be able to return to their human appearance.

If, while they are wolves, someone wounds them or hits them, the wound or mark on their [animal] body is found in exactly the same place on their [human] body." 2

Similar accounts come from other traditions in different geographical locations, not only Celtic. It would mean that 'these people acquired their power of doubling from their ancestors. Does this not mean that it was transmitted through heredity?

Another story mentions, "Laignech Fáelad was a man who had the habit of changing his appearance into a wolf (fáelad). He and his descendants were in the habit of taking on at will the form of a wolf and of killing herds the way a wolf would. He was thus  named Laignech Fáelad because he was the first of his race to take the form  of a wolf." 2

In 'Egil's Saga,' an Icelandic story on the lives of the clan of Egil Skallagrimsson, "a farmer, Viking, and skald traces the family history from 850 to 1000 AD and mentions a man who was called Ulf (Wolf), son of Bjalfi and Hallbera, who was a daughter of Ulf the Non-coward and sister of Hallbjörn the Half-Troll. Every day, when night was coming, Ulf would become hostile, unsociable . . . and he would be taken with sleepiness. It was said that he had a very strong ability to double himself." 2

Turning into a wolf could have been for a variety of reasons. For example, ancient Greeks believed it was a punishment sent by the gods for cannibalism, as in the legend of Lycaon, king of Arcadia, who was considered sinful along with his sons. 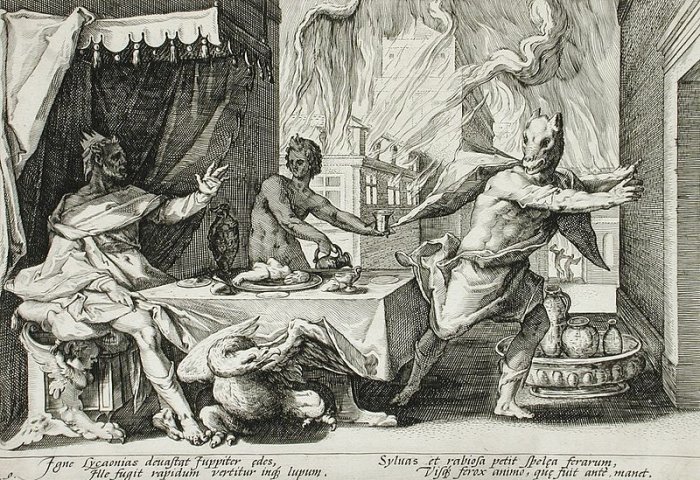 The god Zeus once wanted to find out about their evildoings personally. So, he appeared at the court of Lycaon in the guise of a mortal man. The king, recognizing Zeus, put him to the test the god's omniscience by giving him human flesh during the meal. The furious Zeus overturned the table at which he was sitting. Then, using a lightning bolt, he killed Lycaon and his sons while he spared the youngest one.

According to another version of the myth, Lycaon and his sons were turned into wolves.

In Germanic mythology, the transformation was voluntary and concerned warriors and heroes who hunted enemies in the form of animals. There are legends about berserkers in Norse mythology, in Vedic, Homeric, and Icelandic sources and this tradition was known in India, Mesopotamia, and Europe.

Similar to berserkers were also the so-called Úlfhednar (wolf-men) from the Viking Age. These warriors believed in contact with the spirits of a wolf to increase their power and effectiveness in battle, without feeling any pain at all.

The Úlfhednar and berserkers are associated with the Norse god Odin, but not only with him. Wolf warriors appear among the legends of the Indo-Europeans, Turks, Mongols, and Native American cultures.

"Many Slavic legends speak of warriors having an ability to turn into wolves, but that can only be achieved by an individual of the highest level of personal development, and this transformation is done through an individual's will. It is also that "the powers of darkness have an ability to turn any person into an animal, although if this ever happens, very little of that person remains, and the being is mostly animal." 3

In some ancient accounts, a wolf-shaped individual can be transformed back into a human by killing it with silver bullets ( one of the most efficient ways to kill a creature) or other objects made of silver. 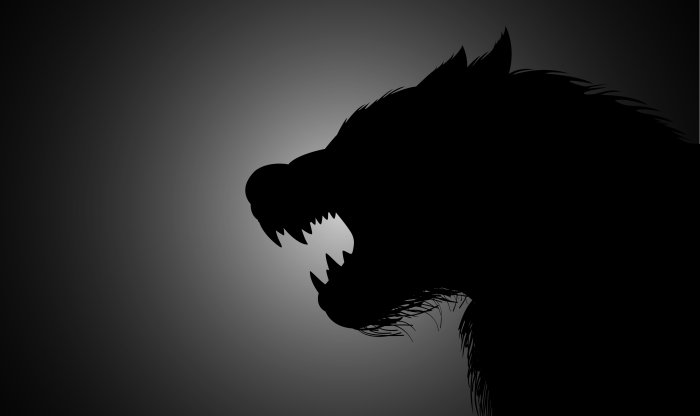 Usually, a dead werewolf turns back into a human, but unfortunately, it sometimes can turn into a vampire when it dies. Greek myths say about the possibility of recovering the human form after nine or ten years, on one condition that a person turned into a wolf could not touch human flesh during this whole time. If she did, she'd be a wolf forever.

Among the ancient people of Scandinavia, the berserkers recovered their human form after burning wolf skin or through prayer. During the transformation, a person could not touch the beast's body because it would forever remain a wolf. Sometimes it was necessary to strip naked and hide clothes in a safe place.

Medieval tradition (much of which originates from French legends) has it werewolves resulted from a curse sent by God and could affect even the entire family.

A child (an unhappy one, indeed) conceived when sexual abstinence was recommended could also be a werewolf. It was particularly important during Christmas Eve or Easter time, a Christian holiday that celebrates the belief in the resurrection of Jesus Christ. Also, the seventh son and even thinking of werewolves could harm the child during baptism.

Invisible Link Between A Werewolf And A Human Being

Among the ancient English beliefs, there was a case of a person who regained consciousness after such a complicated transformation procedure and had normal human feelings that included a strong desire to return to human form. Such people become wolves every seven years, and in the meantime, they are human.

Others remain in the form of a wolf for seven years and turn back into a human after this time.

In the 15th century, werewolves were associated with the Christian idea of the devil and a pact with him. Werewolves were burned at stake for, among others, the murder of children, cannibalism.

Bane, T. Encyclopedia of Beasts and Monsters in Myth, Legend, and Folklore