Ellen Lloyd - AncientPages.com - The Eight Immortals in Chinese mythology are said to know the secrets of nature. These beings are regarded as super-humans who control all aspects of life. Each of the individual immortal's power can be transferred to a tool of power that can give life or destroy evil.

Together, these eight tools are called "Covert Eight Immortals". 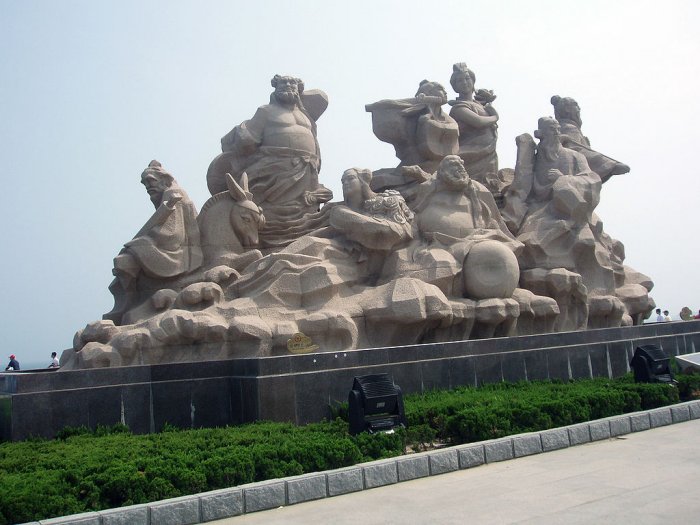 The Eight Immortals are a group of legendary "Xian" (spiritually and/or physically immortal, transcendent, super-human; celestial beings.) are said to live on Penglai Mountain-Island. These legendary beings have been part of Chinese oral history long before they were recorded in the works of writers of various dynasties such as Tang, Song, Yuan and Ming.

Stories about the Eight Immortals and their achievements can be found in various literature and folk tales of China. The Xian are also pictured in art and depicted on a wide variety of porcelain, bronze, ivory, and embroidered objects. The Eight Immortals are considered to be signs of prosperity and longevity, so they are popular themes in ancient and medieval art. 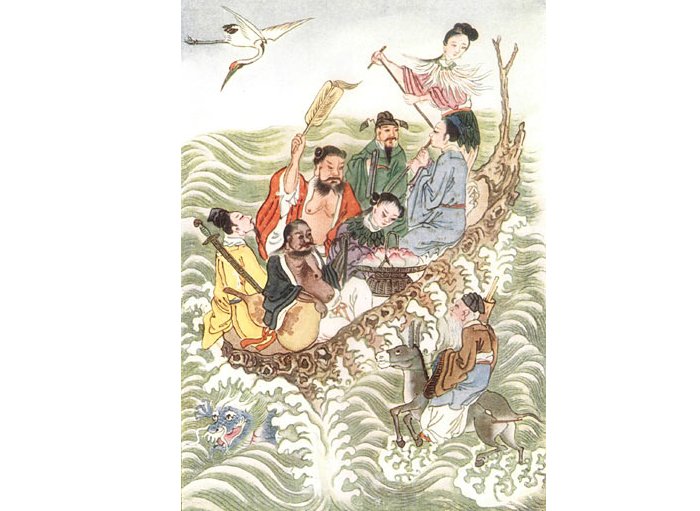 The Eight Immortals crossing the sea, from Myths and Legends of China.

In Taoist legends they are called the "Roaming Immortals". Two of the Eight Immortals arewomen. Each and one of these enlightened individuals possessa tool with special powers.

1. Chung-Li Chuan: The Discoverer Of The Elixir Of Life

Chung-Li Chuan has been credited with the discovery of the Elixir of Life which is the reason why he has become a symbol of longevity.
It is difficult to determine the true identity of Chung-Li Chuan because various sources contradict each other. Some ancient texts state his family name was Chung-li, and that he lived in the Han dynasty. Another account describes Chung-Li Chuan as a vice-marshal in the service of Duke Chou Hsiao. He was defeated in battle, and escaped to Chung-nan Shan, where he met the Five Heroes, the Flowers of the East, who instructed him in the doctrine of immortality.
It is said Chung-Li Chuan discovered the Elixir of Life during a great famine when he transmuted copper and pewter into silver by amalgamating them with some mysterious drug. He later distributed the elixir among the poor, and thousands of lives were thus saved. The Elixir of life and possessed the power to cure the sick and revive the dead.

2. Lan T'sai Ho: The Hermaphrodite And Patron Deity Of Florists

Lan T'sai Ho is variously stated to have been a woman and a hermaphrodite. She/he is variously portrayed as a youth, an aged man, or a girl. In more modern pictures we recognize her as a young boy wearing blue robe and carrying a basket of flowers.
The basket of flowers is symbolizes the transience of life and Lan T'sai Ho's ability to communicate with the gods.

Mystery Of The Seven Sages In Ancient Myths And Legends

3 Chang Kuo: Old Man With A Drum That Can Cure

The period assigned to Chang Kuo is the middle or close of the seventh to the middle of the eighth century A.D. He lived as a hermit on Chung-t'iao Shan, in the prefecture of P'ing-yang Fu in Shansi.
He is an old man usually seen mounted on his white mule, sometimes facing its head, sometimes its tail. He carries a phoenix-feather or a peach of immortality.
His attribute is a drum made of a bamboo tube with two rods with which to strike it. The drum can cure life.

4. Ho Hsien Ku: A Maiden Who Was A Symbol Of Family And Marriage

Ho Hsien Ku was a beautiful maiden who carries with her a magical lotus blossom. When she was young she found a stone called yün-mu shih, 'mother-of-pearl.' In a dream she saw a spirit who ordered her to powder and eat one of these stones, by doing which she could acquire both agility and immortality. She is attributed by the lotus/ which can cultivate people through meditation.
Occasionally she is attributed with a peach, the divine fruit of Gods, associated with immortality or a music instrument or a ladle to dispense wisdom, meditation and purity.

5. Lü Tung-pin: A Scholar With A Magical Sword And Patron Deity Of Barbers

Lü Tung-pin was born in A.D. 798 at Yung-lo Hsien, in the prefecture of Ho-chung Fu in Shans.
When he was 20 years, he made a journey to Lu Shan in Kiangsi, where he met the Fire-dragon, who presented him with a magic sword, which enabled him at will to hide himself in the heavens. He was very skilful in fencing, and is always represented with his magic Excalibur named Chan-yao Kuai, that he uses to slay demons and evil spirits.
This immortal symbolizes scholastic luck and protection. He is also the patron deity of barbers. 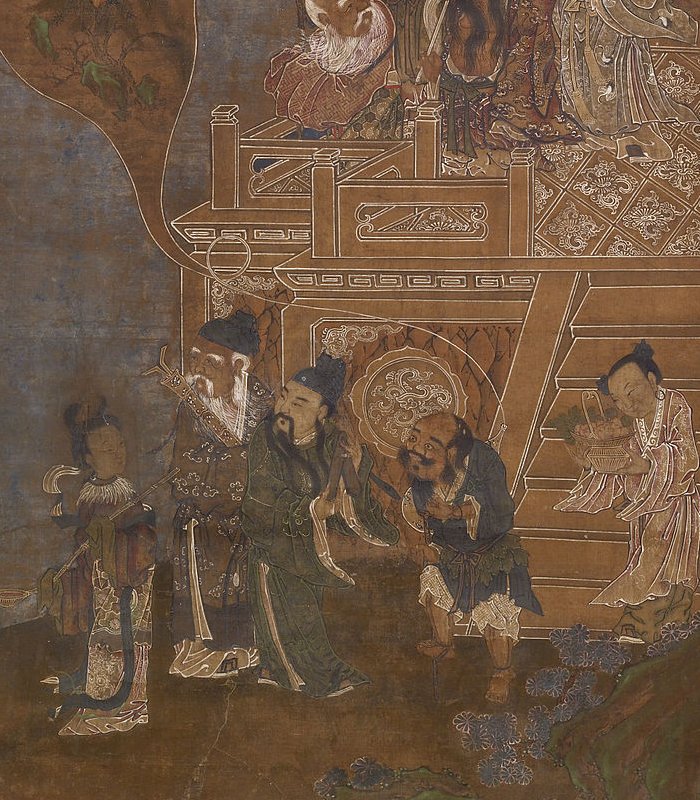 6. Han Hsiang Tzu: A Happy Man And Patron Of Musicians

Han Hsiang Tzu, who is depicted as a happy man with a bouquet of flowers or a basket of peaches of immortality. It is stated to have been a grand-nephew of Han Yü (A.D. 768-824), the great statesman, philosopher, and poet of the T'ang dynasty. Among his special skills was the ability to make flowers bloom instantaneously and smooth wild animals. His attribute is the flute, which can cause growth and he is the patron deity of musicians.

7. Ts'ao Kuo-chiu: The Immortal Who Signifies Fame And Recognition

Ts'ao Kuo-chiu became one of the Eight Immortals because the other seven, who occupied seven of the eight grottos of the Upper Spheres, wished to see the eighth inhabited, and nominated him because "his disposition resembled that of a genie."
He's generally depicted with castanets or a jade tablet of admission to court, and sometimes a feather fan. It is said he is connected with the Sung Imperial family and he signifies fame and recognition.

Pa Hsien Kuo Hai is a great magician who was able to free his soul from his body and aid and meet others in the celestial realm.
He was a handsome man who used his magical skill frequently. Once, while his spirit was gone from his body, a disciple decided that Li Tie Guai was dead and burned his body as tradition required. When Li Tie Guai's soul returned from its travels, he was forced to enter the body of a beggar. He is represented as a lame beggar carrying a double gourd. The gourd, symbolizing longevity and the ability to ward off evil, has a cloud emanating from it. The gourd is also symbol of helping those in need and relieve the distressed.
Sometimes Li Tie Guai is pictured riding the qilin, mystical hooved Chinese chimerical creature, with a physical appearance of various animals like deer, horse, ox, dragon
Li Tie Guai is the emblem of the sick.