Zteve T Evans - AncientPages.com - The Brujo de Chiloé, or the Warlocks of Chiloé, were a secretive coven of male witches allegedly involved in witchcraft and crime on the islands of the Chiloé Archipelago off the coast of southern Chile. It should be emphasised that not all witches on Chiloe were males or belonged to the cult. There were male and female witches who worked for the good of people and were healers and fortune tellers. These were called Machis and considered benevolent, but there were also malevolent practitioners called Kalku, and from these the Brujos may have originated. 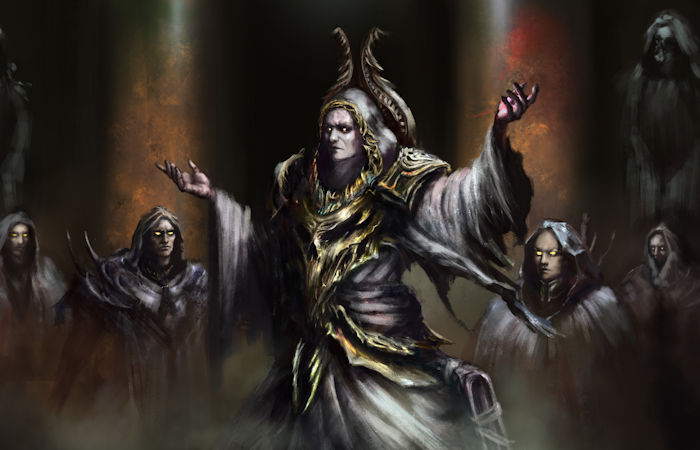 Brujo’s cult was believed to be a complex tight-knit, secretive organisation, drawing from indigenous superstition and tradition and using black magic in their activities. Utilizing the superstitions and beliefs of the islander to their advantage they were alleged to have used intimidation and fear to minimise opposition and to achieve their aims. They were said to be involved in blackmail, extortion, smuggling and other criminal activities.

Although the Brujos were believed to have existed before the arrival of the Spanish and European explorers it was not until the witch hunts conducted by the Chilean authorities during the 1880s the extent of their alleged grisly and criminal activities was revealed to the world.

Initiation Into The Cult

To become a member of the Brujo de Chiloé a candidate had to undergo a set of  gruelling initiation rituals. To cleanse themselves of all traces of Spanish Catholicism they had to spend forty days washing themselves under a freezing cold waterfall, and then make a pact with the Devil. Their next task was to kill a person who was close to them and use their skin to make a bag which would be used to carry their book of spells.

The Brujos were reputed to be the rulers of a secret government, state or kingdom that operated in parallel, but independently of the Chilian authorities. The formation of this sinister regime is believed to be traced back to a battle of sorcery alleged to have taken place in 1786 giving the local witches access to European magic.

The Basque navigator José de Moraleda y Montero challenged a powerful machi named Chilpilla to a competition. Realising he had been defeated Moraleda attempted to escape in his ship, but the machi foiled the escape by causing his ship to run aground. Forced to admit defeat Moraleda gave Chilpilla a book on European magic called  El Levisterio.

This was purported to have led to the fusion of the indigenous sorcery of the Brujo de Chiloé with European black magic, and the formation of an alternative state, with an alternative government formed by the Brujos. This alternative state was called La Recta Provincia, or the Righteous Province, existing secretly and independently of the Chilean authorities. The Righteous Province was controlled by a hierarchy of Brujos with an elected king at its head. The king, with a group of subordinates made up the ruling council called La Mayoria. 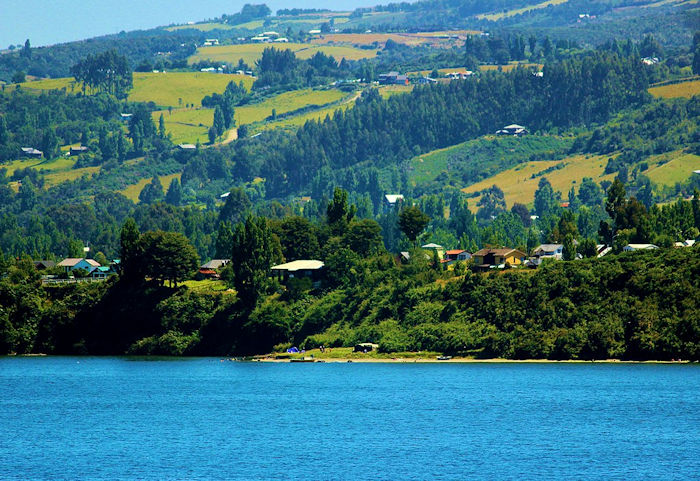 The state was comprised of seven districts that had been given code names corresponding to names from places in Spain and its empire. The belief was in using the names of real places it would help manifest into reality the alternative realm the Brujos ruled.

The controlling centre of the state was found in the hidden cave of Cueva de Quicaví, in the district of Quicaví. This was the headquarters where the meetings and councils were held and, where the Brujos kept the Levisterio, the book of magic, Moraleda had given Chilpilla. Another important item kept there was a special bowl for water that allegedly allowed them to see other people’s secrets. The cave had numerous rooms. or alcoves and was three metres high and two hundred metres long and lit by torches burning by human fat.

One of the most important of the Brujos magical tools was the “macun” which was a piece of skin taken from a dead person that was worn on his chest and tied around his back with laces. When not in use it was rolled up and put away, but when worn it shone and was softer than silk. If the wrong person unrolled the macun shouted out loudly and rolled itself quickly back up, causing the person to jump back in shock and fear.

The macun had the power to make the Brujo invisible, fly, open doors, or transform into a bird or animal. If worn while flying at night, it was said to illuminate the flight path and detect the presence of humans. To prevent a Brujos stealing the skin of the dead a relative made cuts in the skin of the corpse.

Every Brujo had a small live lizard which he wore on his head, wrapped in his bandana next to his skin. The lizard had magical attributes that gave the Brujo access to all manner of forbidden knowledge. They also studied the properties of various plant and animal parts brewing powerful elixirs and concoctions to achieve different objectives. 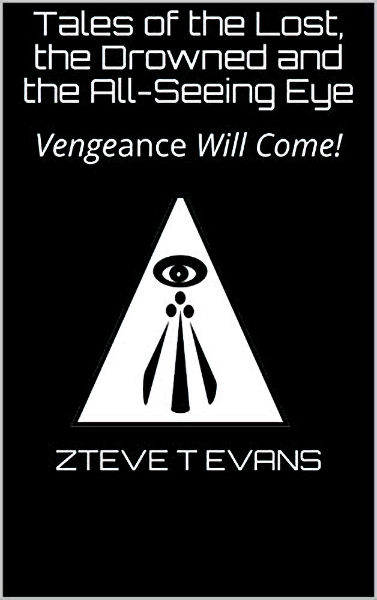 This work explores legends of towns, cities, islands and lands lost to the sea or buried by sand or snow. Along with the legend of the loss very often comes a myth of origin of a feature of the landscape, such as a lake, massive dune or ocean reef. As well as exploring mythical and legendary examples we look at real towns and places in history that were disastrously wiped out. In many cases we find there is a simple but powerful message that our behaviour is constantly monitored and judged. Any transgression of God's laws will not go unnoticed by the all-seeing eye. We will be judged and punished accordingly in a time and manner that suits the divine will. Vengeance will come! Read more

The Brujos could control a mythical beast called the Caballo Marino chilote, which they used to take them over the sea to the El Caleuche, the phantom ship. The El Caleuche was believed to be a ghost ship crewed by supernatural beings and dead people who had been brought back to life. There is an idea that the ship was in fact used for smuggling and an evil and supernatural reputation was deliberately fabricated to frighten and keep people away from prying closely into its activities.

If a Brujo knows the first name of someone he can send them into a deep sleep allowing them to enter their home. Using the claws from an owl they can amputate arms and legs of a sleeping victim, or pull out their hair, which can be used in harmful spells or elixirs against them. Alternatively, it could be used to cause harm to enemies or victims from a distance.

Despite their powers they were known to be vulnerable to salt and had a low tolerance to cinnamon smoke. They could be identified by their wearing of scarves, or high collars, to cover over special tattoos. It was possible to prevent them moving if a cross was made on a chair and they sat on it. Salt or bran thrown at them made them sneeze.

Servants Of The Warlocks Of Chiloé

As well as supernatural beasts the Brujos used humans whom they had deliberately twisted and malformed in the cruellest of ways for their servants. Two of these, the invunche and chivato stood guard to their cave.

The invunche, was forged from a human baby. The Brujos stole babies at birth and put them through a terrible ordeal of physical transformation and mutilation, until their bodies were warped and twisted in the most grotesque and cruel way imaginable. 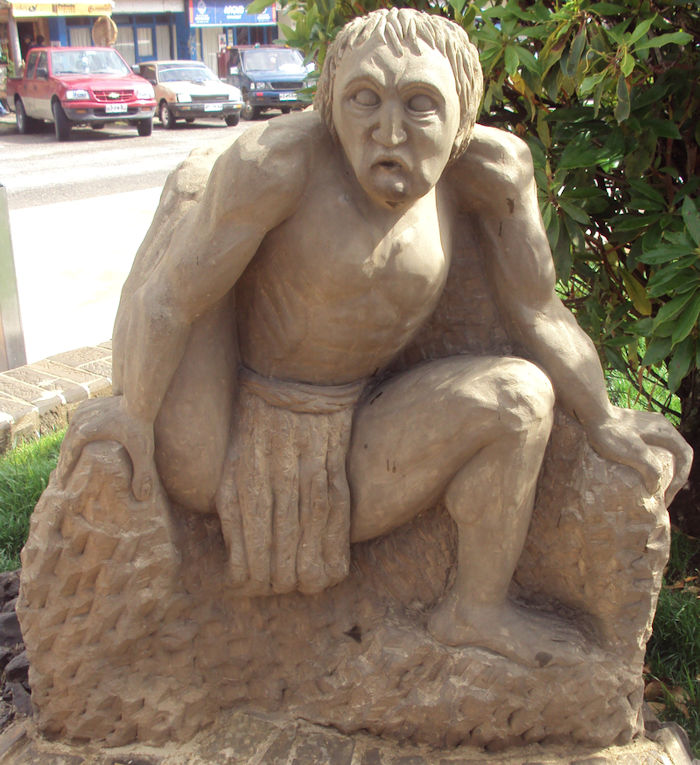 Their tongues were cut in a vee like that of a snake’s to make them more fearsome and to prevent them from talking. An invunche spent its entire existence guarding the Brujos cave only eating raw human flesh given to them by their masters.

The  chivato was mute, goat-like beast with a deformed body covered in bristles like that of a pig. Like the invunche, the chivato had started life as a human baby that had been kidnapped at birth. As it grew the infant was twisted and tortured into its shape by the brutal Brujos to create a more formidable and terrifying guardian for their cave to work alongside the invunche.

The Brujos had a messenger called “La Voladora,” meaning, “ones who fly,” who was usually a female relative of member of their coven. She was made to drink poison which caused her to vomit her entrails from her body. After she had achieved this, she transformed into a black messenger bird that only flew at night carrying the communication of the Brujos wherever they sent her. To return to human form she had eat her own entrail before the sun rose.

The Caballo Marino chilote sea horse not unlike a hippocamp which was only visible to those with special powers. It could appear in the form of a horse and was seen in varied sizes ranging from small to giant size. It was used by the Brujos to ride to the El Caleuche.

As may be expected, with secret societies of any reliable information is difficult to find and verify. The existence of the Warlocks of Chiloé in the past is not in doubt and no real proof of present-day activities is apparent – yet that is not surprising for a secret organisation.

Into the Cave of Chile’s Witches | History| Smithsonian Magazine

earthstoriez| Myths and Legends from Chiloé and its male witches

The Myths and Mythologies of Chiloe, Chile's Most Haunted Island (theculturetrip.com)

Zteve T Evans - enjoys researching deep into the folklore, myths and legends that run through society and are part of our everyday lives and has written extensively for the #FolkloreThursday website He always finds it a source of fascination discovering and learning how our ancestors perceived the times they lived in and how they have influenced us today. Zteve believes that people have far more in common with each other than is often shown on the surface and this can often be seen in the folktales from other parts of the world. Zteve has two websites dedicated to myths, legends, and folklore from around the world. These are Under the influence! and Folkrealm Studies. He has also contributed to Enchanted Conversation Magazine.  and runs Tellurian Studies, a site dedicated to issues concerning the environment, geology, ecology, biology, archaeology and any other branch of science that effects the planet and its inhabitants.