Ellen Lloyd - AncientPages.com - In 1969, members of the German Warka expedition discovered an ancient damaged clay tablet in Uruk, the first city built by Gilgamesh about 4,000 years ago. Examination of this interesting ancient artifact revealed it contained what today is known as the Uruk Prophecy.

Later, scientists unearthed several other old clay tablets. These Sumerian inscriptions were once part of an ancient library belonging to Anu-iksur, a magician who was said to have had divine powers.

Although badly broken, scientists managed to read and translate the inscriptions carved on the clay tablet that contained the Uruk prophecy. It was a very interesting text describing the arrival of an unjust king who will make life miserable for people and bring terror to the whole world.

According to legends, the ancient Sumerian city of Uruk was built by Gilgamesh, a demigod of superhuman strength. The city of Uruk was originally built for Anu, the father of the gods, and his daughter, Inanna, the goddess of love and war. Gilgamesh also irrigated the fields, dug wells, and made orchards.

One side of the tablet with the Uruk Prophecy reveals life became hard in the city and elsewhere in the land. There was no rightful heir to succeed the throne and there was a king who instead of ruling the country spent months in his palace. Due to the damage, it’s difficult to gain information about the events taking place in Mesopotamian at the time, but the other side of the tablet is better preserved, and it gave researchers a  good opportunity to learn more about this ancient prophecy left to future generations.

“On it, a series of kings is predicted. First, a king from the Sealand who ruled in Babylon will come to reign over the devastated part of the land. Then there will be an unjust king who will remove the ancient protective goddess of Uruk and make her dwell in Babylon, placing in her sanctuary in Uruk another, improper goddess. The unjust king will impose heavy taxes upon Uruk and devaste her; next, another unjust king will arise. 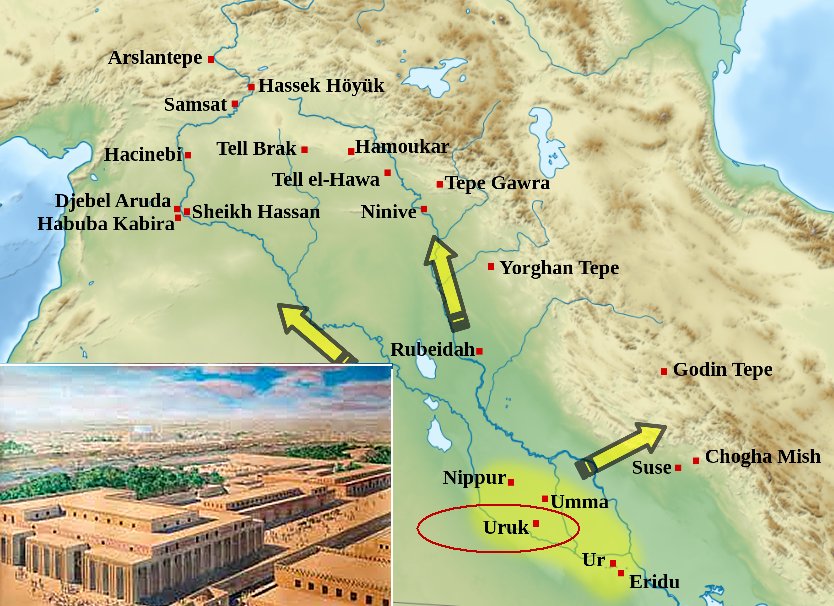 Line 8 begins with KI.MIN (“ditto”) written five times and ends with the statement, surely about a king, “He will take the property of Babylonia to Assyria.” Next, an unjust king will arise who will establish the rites of Anu in Uruk and restore Uruk’s protective goddess to her own sanctuary; he will renew and glorify Uruk, and after him his son will be the king in Uruk and become master of the world (lines 11-16). 1

Ancient Sumerians and Babylonians constantly observed the night skies and were very skilled astronomers. Many of their prophecies were influenced by celestial objects and events they witnessed in the night sky. However, the Uruk Prophecy differs from the Marduk Prophecy which we discussed in an earlier article.

It is an interesting observation, especially if we consider the fact that the ancient city of Ashur, (also known as Assur) was the first capital and powerful religious center of the Assyrian Empire.

Who the author of the intriguing Uruk Prophecy was, is still a mystery, but he apparently claimed to be someone of divine origin.