AncientPages.com - Florida was something of a horse paradise 5 million years ago, providing everything horses could want in a relatively small area, a new geochemical analysis of fossils suggests.

The world’s first horses originated in North America, lived there for 55 million years before spreading to Asia and Africa while going extinct on their home continent about 12,000 years ago. The small three-toed animals lived like antelope, browsing leaves in deep forests.

But during the Miocene Period between 23 million and 8 million years ago, horse evolution exploded into 15 different families. Horses developed bigger bodies, longer legs and hard hooves in place of toes to help them cover more ground. 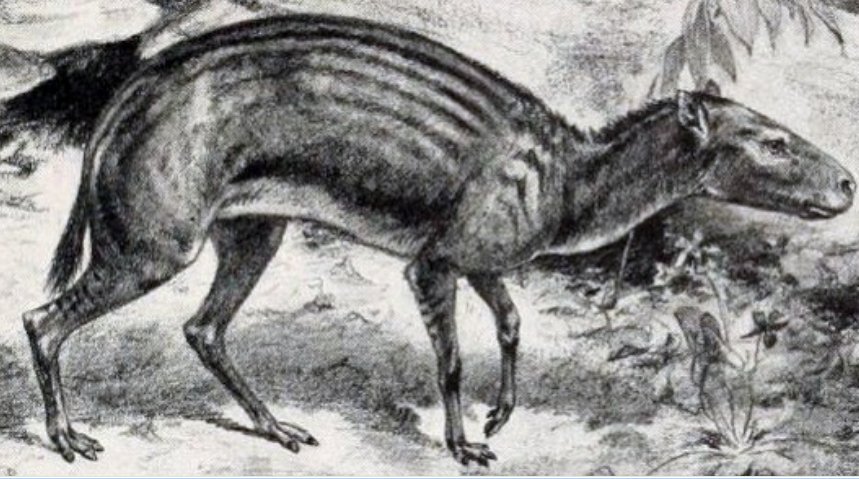 But geologists in UC’s McMicken College of Arts and Sciences found that prehistoric horses in coastal Florida lived and died within a comparatively small area.

“It seems that these horses in Florida were relatively sedentary. They didn’t travel far distances,” Jenelle Wallace, a UC graduate and lead author of the study, said in a press release. 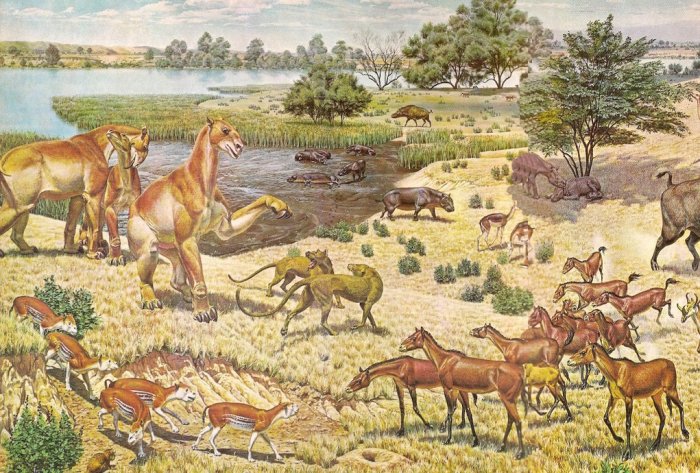 Illustrator Jay H. Matternes captured a scene from the Miocene Period as an ancient species of horse called Parahippus, lower right, interacts with other carnivores and herbivores of the time. Illustration/Jay H. Matternes/U.S. Department of the Interior/Wikimedia Commons

UC’s geologists compared strontium isotopes found in fossilized horse teeth to the strontium in bedrock in different parts of the American Southeast to track the horses’ wanderings. Plants such as grass absorb strontium from the earth and the horses, in turn, absorb that strontium while grazing. In this way, strontium serves as a geographic marker.

This technique was also used to track the movements of other animals, both living and prehistoric. Crowley used bones collected from the nests of secretive goshawks to map the birds’ travels in Madagascar. She and Miller also are studying the movement of Ice Age mastodons in North America.

“There is a lot of opportunity for expanding the use of strontium to look at a variety of animal groups, time periods and locations,” UC geology professor Brooke Crowley said.

The study examined seven species of horse along with two known leaf-eaters: a prehistoric tapir and a distant relative of elephants called a gomphothere.

The results showed that of all the animals studied, the tapir seemed to have the widest geographic range based on the high variability of strontium found in its teeth. But given that modern tapirs have relatively modest home ranges, researchers said it’s more likely that prehistoric tapirs consumed river plants that absorbed nutrients carried far downstream.

Among the horses, the researchers found little variation in the size of their ranges. But the strontium showed a connection between horses and the sea. Like modern horses today in places such as Assateague Island National Seashore, prehistoric horses might have fed along the coast. Researchers suggested the vegetation horses consumed was influenced by marine-derived strontium from seaspray, precipitation or saltwater intrusion into groundwater.

The study was funded by grants from the UC Geology Department, Sigma Xi, the Geological Society of America and the American Society of Mammalogists along with the Association for Women Geoscientists' Winifred Goldring Award.

“The study suggests we’re not the only couch potatoes. If animals don’t have to move, they won’t,” UC geology professor Joshua Miller said.

"Migrating is dangerous business, Miller said. Animals face injury, illness and starvation when they travel great distances. And in the Miocene Period, horses had to outwit plenty of big predators such as saber-toothed cats. The energetic costs of moving are high."

“Having a deep perspective is really important for understanding a species’ needs in conservation and management,” Crowley said. “If we just look at a narrow window of time — like 50 or 100 years — we don’t get a good picture of a species when it’s not in crisis.”