Ellen Lloyd - AncientPages.com - Ancient myths, legends and sacred texts tell of a number of historical figures who were in possession of flying chariots or flying airships, and one of them was King Solomon.

King Solomon was according to ancient scripts, not only a very wise man, but he also had access to remarkable highly sophisticated technology. As previously mentioned, King Solomon possessed a stone known as the magical Shamir and this strange object could cut through any stone. It is said that the Shamir could alter stone, iron and diamond, by its mere gaze.

Equally intriguing is the mystery of King Solomon's mines.
Ancient sources tell King Solomon's wealth was one of the largest in the world and the great wise king possessed tons of gold. But where did this wealth come from? 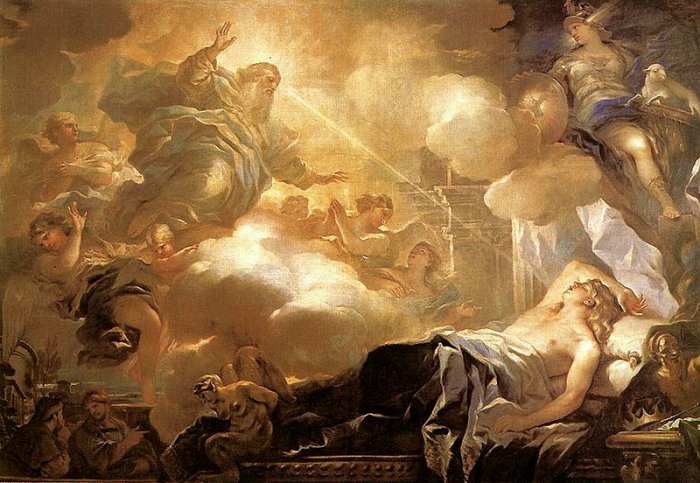 In the Bible it is written that Solomon's servants, traveled to Ophir 'and fetched from thence gold, 420 talents' - roughly 20 tons. But that is where the clues stop and the trail goes cold. The location of Ophir, it seems, was meant to remain a mystery.

The true location of legendary Ophir has never been established.

It is true that King Solomon was considered a wise man in his day, but his so-called wisdom wouldn't get him very far today.

One examples of his "illogical and cruel" reasoning dealt with settling a maternity dispute between two women.

His solution was to cut the child in half. The real mother prevented the execution by giving up her claim. We are left to wonder if Solomon would have done it.

And the king said, "Bring me a sword." So a sword was brought before the king.

And the king said, "Divide the living child in two, and give half to the one, and half to the other." (1 Kings 3:16) He built a place for Molech.The cult of Molech was associated with child sacrifice.

And so he did for all his foreign wives, who burned incense and sacrificed to their gods. (1 Kgs. 11:7-8)

Ancient scriptures also reveal that the great Hebrew King was owner of a marvelous ancient airship. According to Kebra Negast ("Glory of Kings"), an old and very important Ethiopian document, King Solomon was visited by Queen of Sheba who crossed the Red Sea to present day Yemen and up the Hijaz to Jerusalem to visit the court of King Solomon. 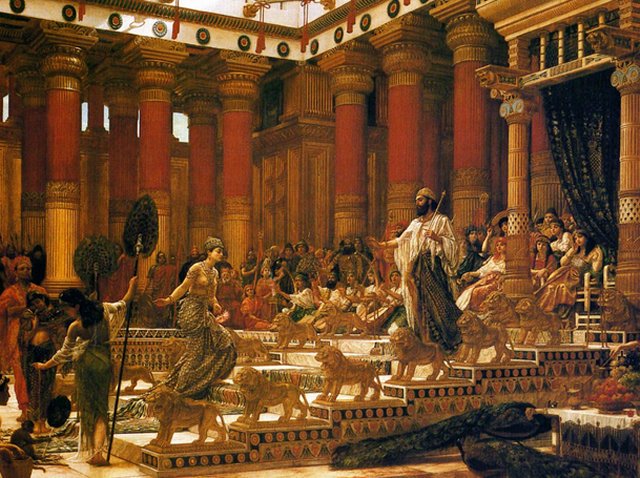 The Visit of the Queen of Sheba to King Solomon. Credits: wikipedia

Her main goal was to see the important Ark of the Covenant and she was fascinated by stories of King Solomon's wisdom that had reached her country.

She stayed with the Hebrew king for some months. Then she returned back to her own kingdom and gave birth to King Solomon's son - Menelik I.

According to the Kebra Negast, King Solomon would visit Makeda and his son Menelik by flying in a "heavenly car."
"The king... and all who obeyed his word, flew on the wagon without pain and suffering, and without sweat or exhaustion, and traveled in one day a distance which took three months to traverse (on foot)."

Throughout the Middle East, as far as Kashmir, are mountains known as the "Thrones of Solomon," including one in northwestern Iran, a flat-topped mountain called Takht-i-Suleiman (Throne of Solomon).

It has been conjectured that these may have been landing bases for Solomon's airship.

It is fair to say that King Solomon's temple, enormous riches, and incredible ancient high-tech devices still remain shrouded in a veil of mystery.

Childress, David Hatcher Technology of the Gods: The Incredible Sciences of the Ancients