A. Sutherland - AncientPages.com - An interesting – though only fragmentary – Babylonian myth tells the story of Anzu/Zu (‘the wise one’), the bird-god, whose home is the underworld. Anzu - a gigantic sky creature half man and half bird with huge wings - could walk on two legs like a human.  His wings could create thunder, whirlwinds and sandstorms.

Originally, it was an earlier Sumerian myth and according to this myth, this creature was associated with  Sumerian storm demon – the Anzu bird, which is represented among the stars by Pegasus and Taurus.

In the Akkadian version of the evil bird-god Zu is named Imdugud/Anzu  ‘the wise one of heaven’.

An ancient legend says that Zu – ‘worker of evil, who raised the head of evil’ has one very special wish: he wanted to rule the gods. 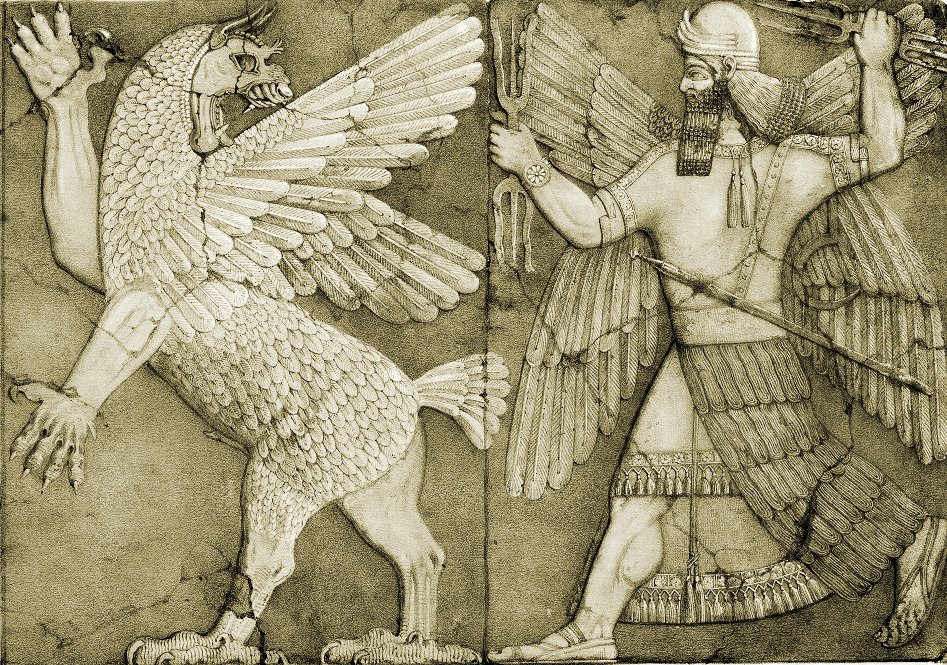 The bird-god Zu decided to steal the Tablet of Destiny from the great god Enlil. With the stolen treasure he escaped to a shelter on a mountain top in Arabia. He knew that the wearer of this tablet had the full control of the universe and fates of all. The Tablet of Destiny (or in Sumerian: 'me') was a sort of divine template.

Anu asked two gods to volunteer to slay Zu, but they refused in the face of the supreme power Zu now possessed. 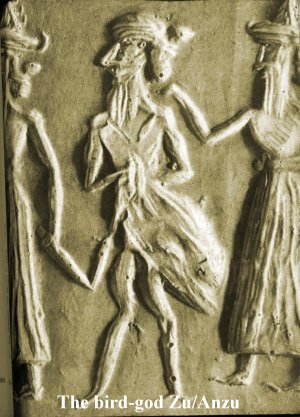 He could breathe fire and was so enormous that the flapping of his wings brought on huge storms, the legend says.

Finally, a successful, powerful and brave champion appeared. According to Babylonian sources, it was Marduk and in Sumerian version of the story, it was Lugalbanda, the third king of the city of Uruk, husband of the goddess Ninsun and the father of Gilgamesh.

In other versions of this myth,  the god Ninurta, son of Enlil and Ninhursag, was the hero who retrieves the Tablet by killing the bird with his arrows.

Details of Zu’s defeat are unfortunately lacking, because the legend survived only in fragments, however, there is a cylinder seal impression that suggests that evil bird-god Zu was finally brought before Ea depicted as the water god, for judgement.

The cylinder seal impression depicts the terrifying bird Zu being judged after stealing the Tablet of Destiny.

The stealing of the Tablet of Destiny is not the first incident related to the evil Zu also widely known as Anzu. This figure regularly appears as the enemy of the high gods.

D. C. Snell, A Companion to the Ancient Near East