Conny Waters - AncientPages.com - An extraordinary 1,000-year-old Viking sword has been discovered in Cork, Ireland. The sword is a little over 30 cm in length and made of wood.

The artifact is still in good condition and archaeologists say it is one of several artifacts of “exceptional significance” unearthed during recent excavations at the historic site of the former Beamish and Crawford brewery in Cork city.

It’s somewhat of a miracle how the Viking sword and other wooden artifacts survived underground in such pristine condition.

The Viking sword is highly decorated and was most likely used by women to hammer threads into place on a loom; the pointed end is for picking up the threads for pattern-making. 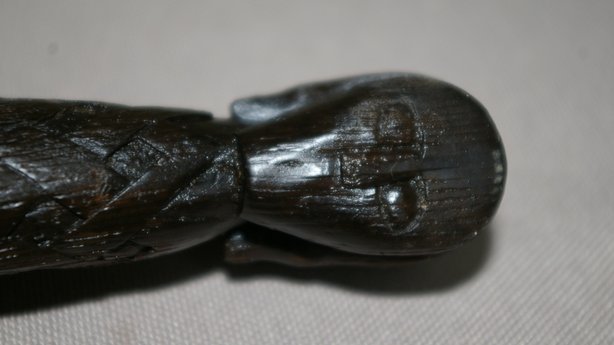 “For a long time, there was a belief that the strongest Viking influence was on Dublin and Waterford, but the full spectrum of evidence shows that Cork was in the same cultural sphere and that its development was very similar. A couple of objects similar to the weaver’s sword have been found in Wood Quay in Dublin, but nothing of the quality of craftsmanship and preservation of this one,” consultant archaeologist Dr. Maurice Hurley said.

Cork Lord Mayor Cllr Tony Fitzgerald said it had been a “magical experience” to hold a Viking dagger that had been buried for so long.

“The moisture on the dagger was fresh; it was in perfect condition,” he said, predicting “a very strong public interest” when the items go on display, which could be as early as February 2018.

Except for the sword, archaeologists also found a wooden thread-winder carved with two horses’ heads, also associated with fabric weaving.