AncientPages.com - Researchers at the National Institute of Anthropology and History (INAH) at the Pontifical University of Mexico investigate a spiral formation of human skeletal remains discovered in an ancient burial pit. 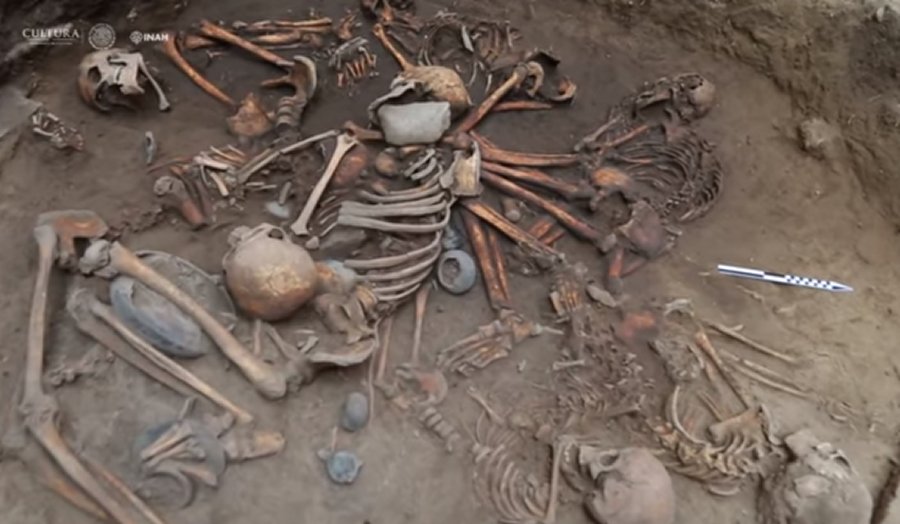 This Pre-Aztec burial place is located at Tlalpan borough in the South of Mexico City and was created 2400 years ago, according to researchers.

The discovery, dating from roughly 2400 years ago was made during works by anthropologists Lucía López Mejía and Sonia Rodríguez Martínez , who confirmed that most of the ten burials were adolescents, although an adult, infant and the remains of a month-old child has also been identified.

It was also confirmed that at least two of the burials had deliberately deformed skulls and some of the skeletons’ teeth had also been malformed.

For now, the causes of death are still under investigation.

However, the method of cautiously positioned skeletons into a spiral formation with linked arms suggests a some kind of ritualistic ceremony involved.

This theory is reinforced by the placement of offerings, from earthenware bowls and pots and in some burials where ceramic spheres and stones were placed in the skeletons’ hands.

During the five-month-long excavation works, researchers have located more than 20 other trunk-shaped pits, of which six contained individual burials of mostly adults.