A. Sutherland - AncientPages.com - Freya (Freyja) was a daughter of Njord, the god of the sea, and Skadi, a jötunn and goddess associated with winter, skiing, mountains, and bowhunting.

Freya represented the Vanir gods, who lived in Vanaheim and cared for the weather. No one ever knew where Vanaheim was located or what it looked like. 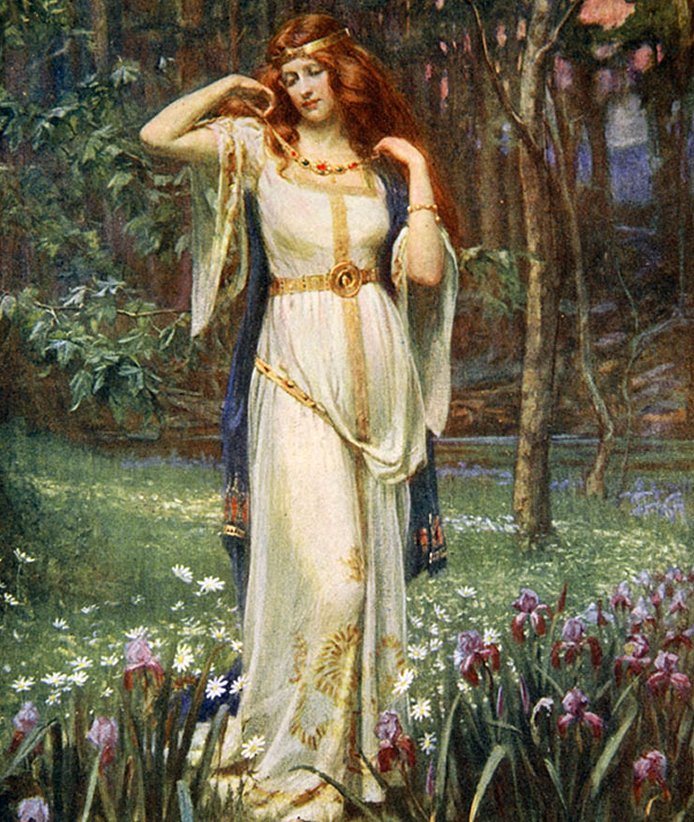 She was considered the most beautiful of all the goddesses in the Norse pantheon. In German mythology, her name was Frigga, while in Scandinavian countries, she was known as Freya or Vanadis, an inhabitant of Vanaheim.

When the war between the Aesir and Vanir ended, the Aesir and the Vanir had to exchange hostages, so Njord, and his two children, Freya and her twin brother Frey (Freyr), had to move to Asgard, one of the Nine Worlds, and home to the Aesir tribe of gods.

When Freya entered Asgard, the gods were so amazed at her beauty and grace that they granted her the sacred realm of Folkvang (Fólkvangr) and the great hall Sessrumnir (Room of Seats), where she could comfortably accommodate all her guests. Freya became an honorable member of the Aesir and "....the loveliest Goddess she in Heaven, by all..."

Associated with sex and lust, this beautiful goddess was not only admired by gods and goddesses but also sought by several giants and dwarves.

In "Lokasenna" ("Loki's quarrel"), in one of the poems of the Poetic Edda, Loki, the trickster god, accused Freya of having slept with all the gods and jötnar (commonly known as Giants) and even with her brother, Frey. 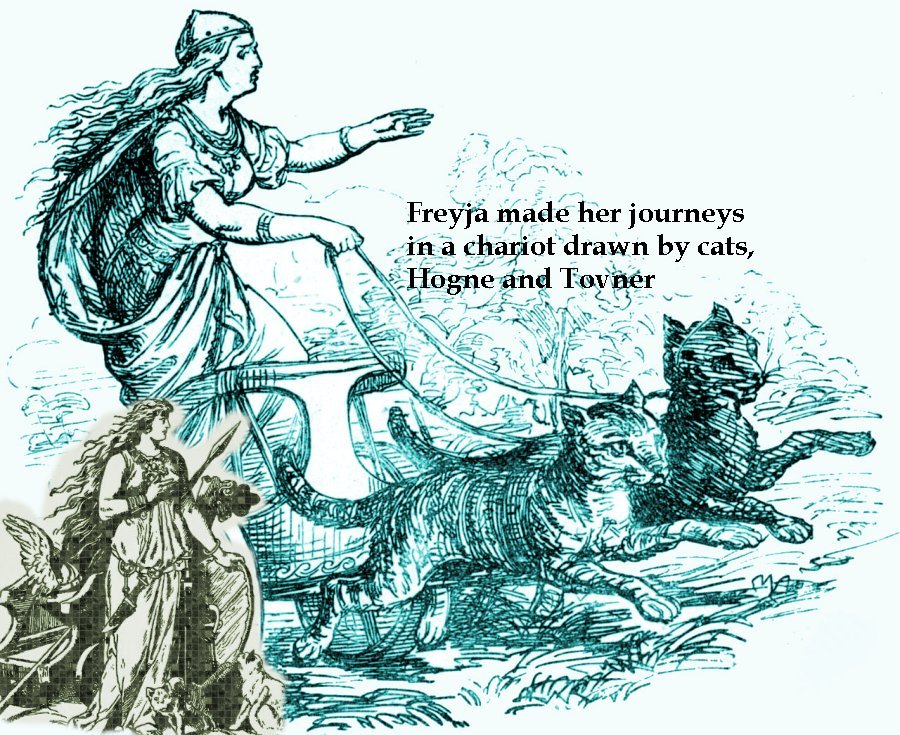 As a truly remarkable personality, Freya also had other qualities. She was often depicted wearing the usual flowing feminine garb, a corselet, helmet, shield, and spear. As a martial-minded goddess and a receiver of the slain, she collected the souls of heroes killed in battles and brought them to Valhalla, a majestic hall in Asgard, ruled by the god Odin. Half of the souls went to Odin, and another half belonged to her. In her realm, she also welcomed faithful, good wives and pure maidens who could accompany their lovers and husbands after death.

Freya, the golden-haired and blue-eyed goddess, was sometimes considered a personification of the earth.

She was married to Odur, a symbol of the summer sun; she loved him and had two beautiful daughters with him: Hnoss and Gersemi. But once he left her, she had to search for him, traveling from land to land, using her amazing, magical, and invaluable garment.

It was a falcon garb (or falcon plumes), which enabled the wearer to fly through the air like a bird.

Usually, Freya made her journeys in a chariot drawn by cats, Hogne and Tovner.

Freya always wished for gold and other beautiful precious objects. Her greatest treasure was the Brisingamen Necklace, a "fiery/glowing necklace" (in Old English 'Brosinga mene' and Old Norse Brísingamen. 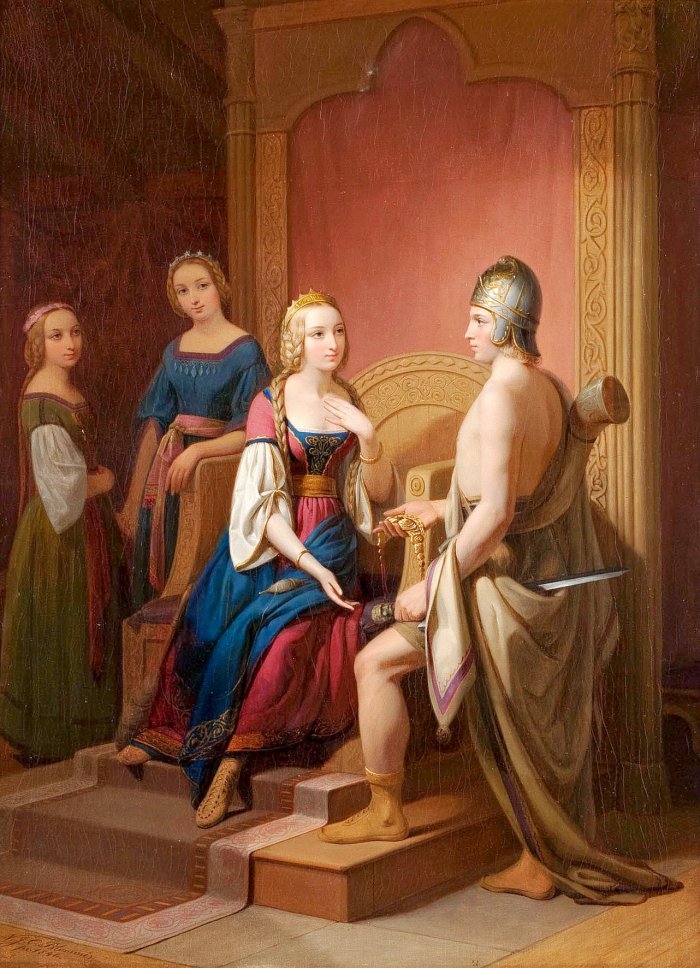 One version of the story of how Freyja acquired the necklace says that one day, Freya left Asgard, crossed Bifrost, and traveled across Midgard. She came to a cavern of the smiths and met four dwarves, Alfrigg, Dvalinn, Berling, and Grerr.

Among many treasures, she noticed a necklace of gold decorated with the most beautiful patterns. She realized she had never desired anything so much. She tried to buy it from the dwarves. They said they did not need more gold or silver. Finally, she asked what price they would accept.

'There's only one price,' said the third of the dwarves, 'that will satisfy us.'
The fourth dwarf looked at Freyja. 'You,' he said.
The goddess flushed, and her breasts began to rise and fall.
'Only if you lie one night with each of us will this necklace ever lie round your throat,' said the dwarfs.

They wanted that she would spend one night with each of them. She agreed and spent four days and four nights with the dwarves.

At the end of the time, the dwarves fastened the Brisingamen Necklace around her neck.

Unfortunately, Freya was not entirely alone with the dwarves. Outside, the trickster god, Loki, also saw what she had done. While she was on her way home to Asgard, Loki returned faster, went straight to Odin's hall, and told him of Freya's prostitution.

This great goddess had many worshipers, and numerous temples were built in her honor. The Northern people invoked Freya not only for success in love, prosperity, and increase but also, at times, for aid and protection.

When Christianity was introduced in the North, her temples were transferred to the Virgin or St. Gertrude. Like all the heathen divinities, Freya herself was declared a demon or witch and banished to the mountain peaks of Norway, Sweden, or Germany.

Guerber H. A. Myths of the Norsemen