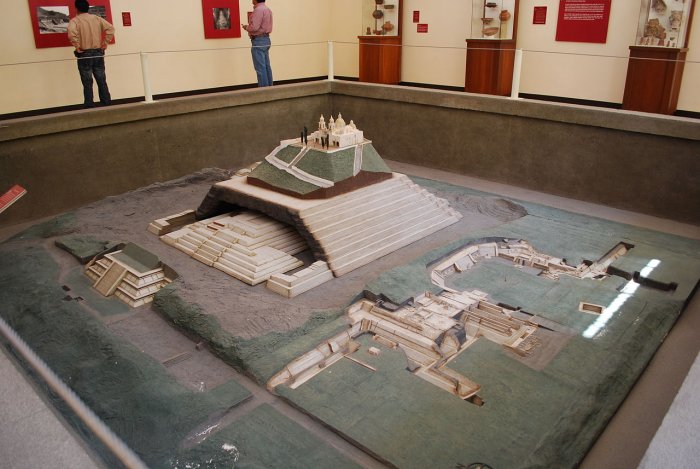 According to the myth, the pyramid was built by a giant named Xelhua of adobe bricks after he escaped a flood in the neighboring Valley of Mexico.

Legend has it, Xelhua  one of the seven giants of Aztec mythology who  climbed the mountain of the rain god Tlaloc. Later, they built the Great Pyramid at Cholula. The Dominican monk wrote the following report:

"When the waters receded, one of the Giants named Xelhua, nicknamed "The Architect," went to Cholula, where as a monument in honor of Tlaloc, who served as a shelter for him and his six brothers, he built an artificial hill in the form of a pyramid.

"He ordered the bricks to be made in the province of Tlalmanalco, at the foot of the Sierra Cecotl, and in order to deliver them to Cholula, he set up a government of men one by one who passed them from hand to hand. The gods noticed with anger the building, whose top was supposed to reach the clouds. Angered by Xelhuy's bold attempt, they threw fire at the pyramid.

"Many workers died. The work was abandoned and the monument was later dedicated to Quetzalcoatl..."

The Great Pyramid of Cholula (or in nahuatl Tlachihualtepetl), is a temple building in Cholula, in the state of Puebla in Mexico. Its name in nahuatl means "handmade mountain". It was dedicated to the god Quetzalcoatl. In time, Cholula became a mecca for pilgrims from all over Mexico, who flocked to the city to pay homage to the feathered serpent god. 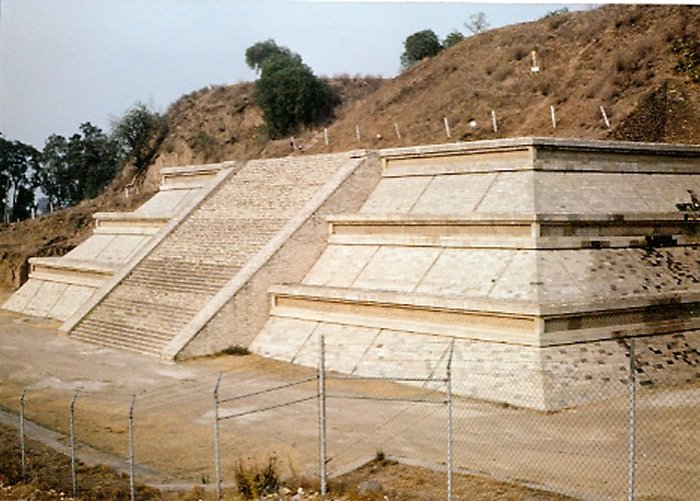 Upon the arrival of Cortés, Cholula was Mexico's second-largest city, with a population of up to 100,000 by some estimates.  There is some disagreement about what happened next, but it appears that Cortés discovered the alliance between Cholula and Tenochtitlán; perhaps he became aware of a plot against the Spaniards, and he decided to make a pre-emptive attack. The temple was destroyed, and a church was built on the pyramid of Cholula, which the Spaniards believed was only a large hill.

The history of the pyramid is relatively unknown, From the 1930s until today, massive efforts have been made to excavate the pyramid. The pyramid consists of six superimposed structures, one for each ethnic group that dominated it.

The Great Pyramid of Cholula has a base four times the size of Pharaoh Khufu's Great Pyramid of Giza and is the most extensive pyramid base in the Americas.It is the largest pyramid found by archaeologists to date, with a base area four times larger than the Pyramid of Cheops in Egypt. The height of the pyramid is 66 m, and the width is 450 m. It is a very impressive structure.

The history of the pyramid is relatively unknown, but construction began around 300 f.Kr. It is dedicated to the Aztec Quetzalcoatl, and the area has been sacred from the beginning. Scientific explorations of the pyramid began in the 1930s.