Kibyra,(or Cibyra Magna), was the main city of the Cibyratis region whose core was formed in the 2nd second century BC by four cities - Kibyra, Bubon, Balubura, and Oenoanda, known collectively as Tetrapolis. Kibyra was considered the most influential member of the federation. 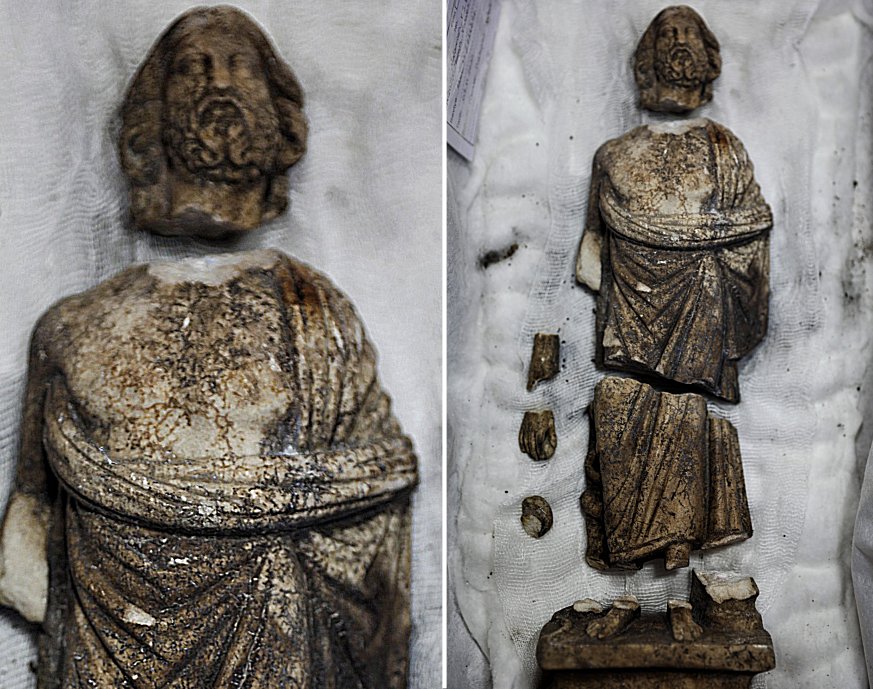 The statue of Asclepios is seen in seven pieces, found in the ancient city of Kibyra in Burdur province, southwestern Turkey, Nov. 23, 2020. Image credit: AA

Roman general, Lucius Licinius Murena, put an end to the federation in 83 BC, during the Second Mithridatic War. The territory of the federation was then divided, and the city Kibyra became part of Phrygia.

Strabo, the Greek geographer, claimed that the residents of Kibyra were the descendants of the Lydians, the indigenous people of this part of Asia Minor.

The two unearthed statues are dated back to the Roman period. One of them depicts Asclepios, the god of medicine and healing in Greek mythology, and was discovered on the southern side of the temple of the imperial cult in the ancient city.

The statue that represents fine workmanship was unearthed in seven pieces. The 38-centimeter (15-inch) artifact depicts a clothed Asclepios with long, curly locks and a beard.

'Asclepios, resting on his staff with a snake wrapped around it, holds an egg in his hand. There are very few depictions of Asclepios holding eggs, and the statue helps researchers further understand the attitude of the Kibyra people toward health and is also an important piece of archaeological history,' writes Daily Sabah.

Another statue represents a marble bust of Serapis, the Egyptian-origin sky god or god of light, and this statue was discovered in two parts at the site of excavations. 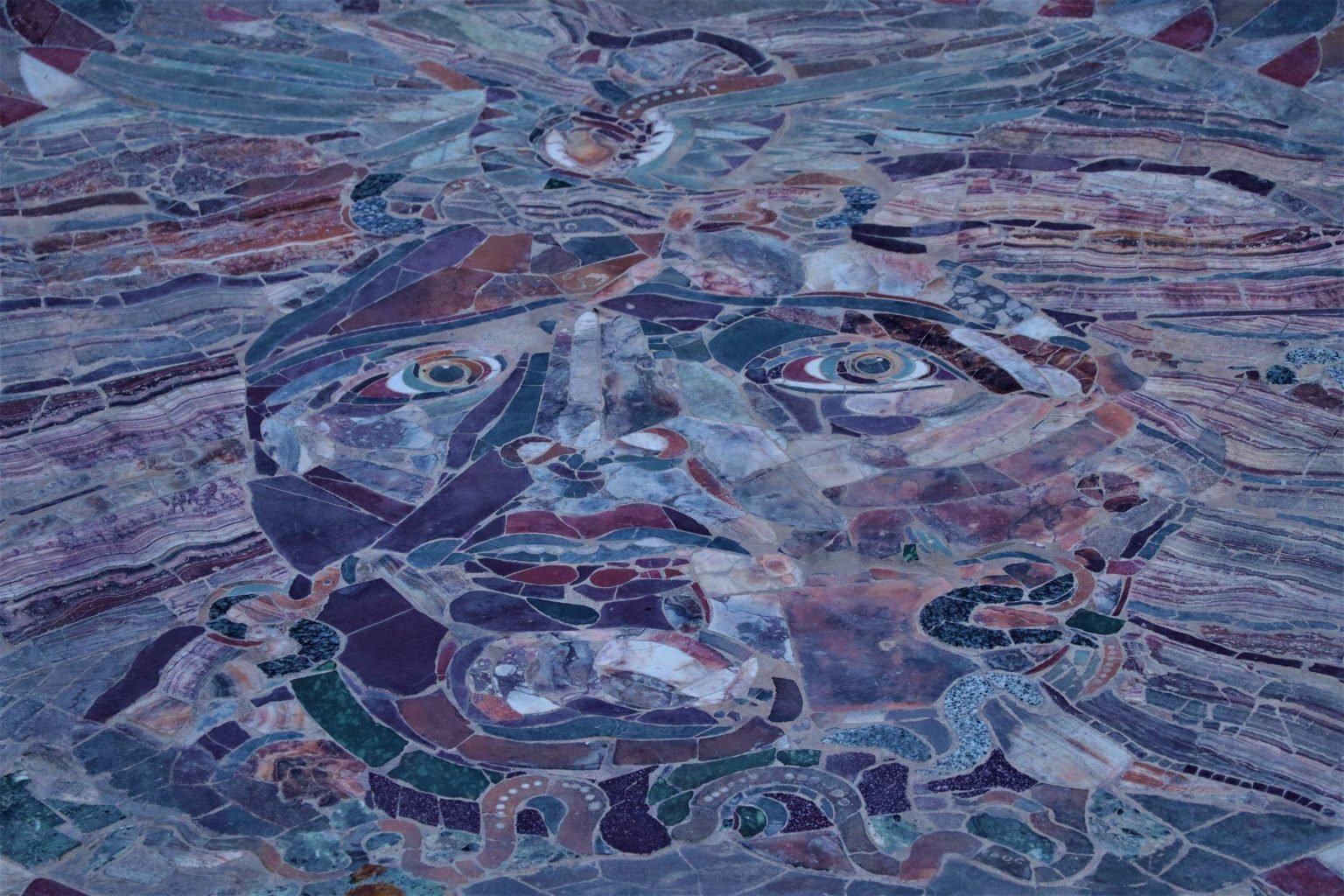 A close-up shot of the Medusa mosaic at the ancient city of Kibyra, Burdur, southern Turkey, Aug. 22, 2020,  Image credit: AA

However, the body of the Serapis bust was found first in 2019, and later, during a clean-up of the Roman bath complex, the archaeologists the head of the statue. The marble bust is now ready to be put on display following repair works done by veteran restorers on the excavation team.

The ancient city of Kibera (also known as the "city of gladiators") is located at an altitude of 1,350 meters (4,429 feet). The 2,300-year-old city boasts a 10,400-person stadium built in Roman and Byzantine architectural traditions, an odeon (music house) covered with a very beautiful Medusa mosaic, a late Roman bath, agoras, underground chamber tombs, and the main street.

Ancient sources confirm that Kibyra was the last place in Anatolia, where the traces of Lydian culture, long forgotten in other parts of the region, could be found.

The inhabitants of Kibyra were skilled in metallurgy, and minted coins dated to the mid-first century BC until the reign of Emperor Gallienus i.e. the middle of the third century CE. 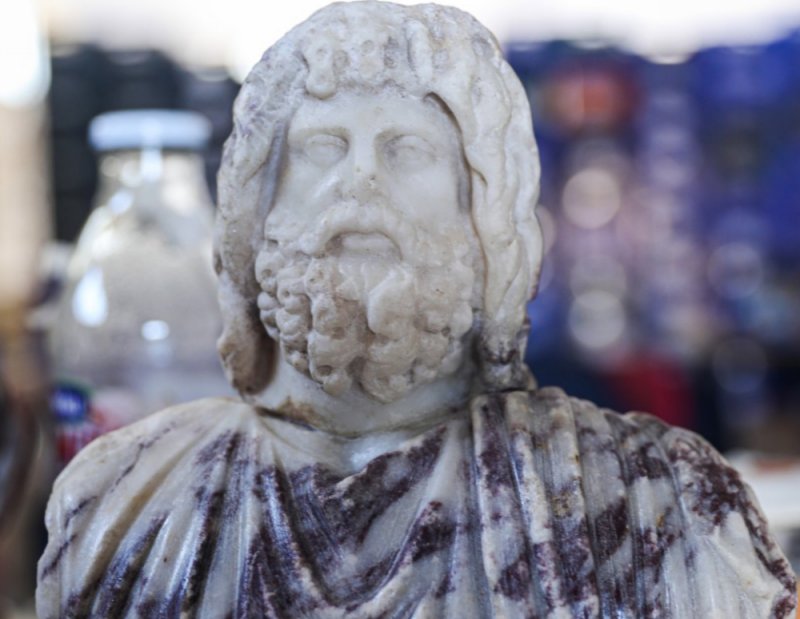 After the Roman conquest, Kibyra still remained a major town in the region due to crossroads of important routes, on the border between Karia, Lydia, Phrygia, and Pisidia. Most of the buildings preserved in this ancient city were erected in Roman times, especially, after 23 CE when the city was devastated by an earthquake.

Successive Roman emperors contributed to the reconstruction of the city. Emperor Tiberius exempted Kibyra from taxes for three years, and Emperor Claudius helped with the reconstruction and the organization of the games started from the year 25 CE. Also, Emperor Hadrian, while traveling through the eastern provinces of the Empire, arrived in 129 CE to Kibyra and granted many privileges to its inhabitants.

After a destructive earthquake hit Kibyra in 417, the city could not be entirely rebuilt, and the inhabitants had to leave their city.