AncientPages.com - On July 20, 1866, the Battle of Lissa took place in the Adriatic Sea near the Dalmatian island of Lissa. On June 20, Italy officially declared war on Austria.

It was the first major naval battle between ironclads (steam-propelled warships protected by iron or steel armor plates), which replaced wooden sailing ships. 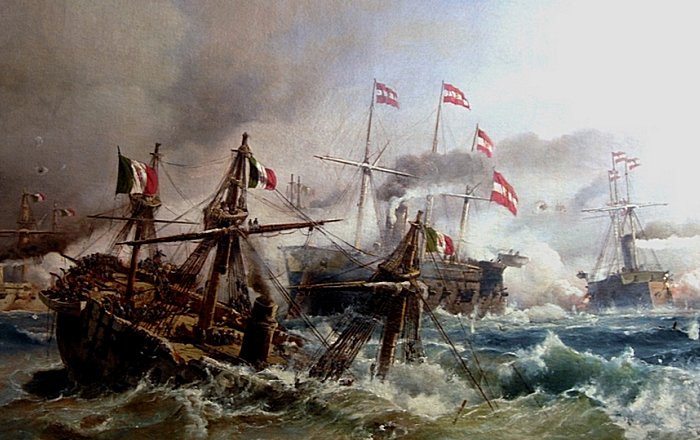 It was a decisive victory for an outnumbered force of the Austrian Empire of the Habsburgs over a numerically superior Italian power.

The commander of the Habsburg Fleet was the famous Admiral von Tegetthoff, and the Italian Fleet - much stronger than the Habsburg Fleet and with more ships - was commanded by the minister of Navy Carlo di Persano. The Italians wanted to win the battle and conquer the Croatian island of Vis (Lissa).

Admiral Persano left the port of Ancona and attacked the island, especially Vis and Komiža, which are today part of Croatia. The Italians intended to destroy the city’s fortifications but failed and could not land on the island.

The Habsburg Fleet was also sent to the island of Vis, and Admiral von Tegetthoff knew that the Italians were superior. He decided to form his ships in a wedge; thus, his forces could directly attack the enemy.

It was Tegetthoff’s tactical surprise, and the Italians didn’t have time to shoot, although they had more cannons.

Tegethoff’s “Erzherzog Ferdinand Max” crashed into the broadside of the Italian “Re d’Italia,” which sank with the loss of nearly 400 crew.

After the Italian “Palestro” explosion, the Italian Admiral ordered the withdrawal. The Habsburgs won this battle. The Italian Fleet lost 620 men, and 38 of the Habsburg Fleet died.

The Italians did not manage to conquer the island of Vis.