Conny Waters - AncientPages.com - Ruins of the Temple of Hadrian that once stood in the ancient city of Cyzicus, are now excavated by a team of researchers led by professor Nurettin Koçhan from the Faculty of Humanities and Social Sciences of Bandırma Onyedi Eylül University. 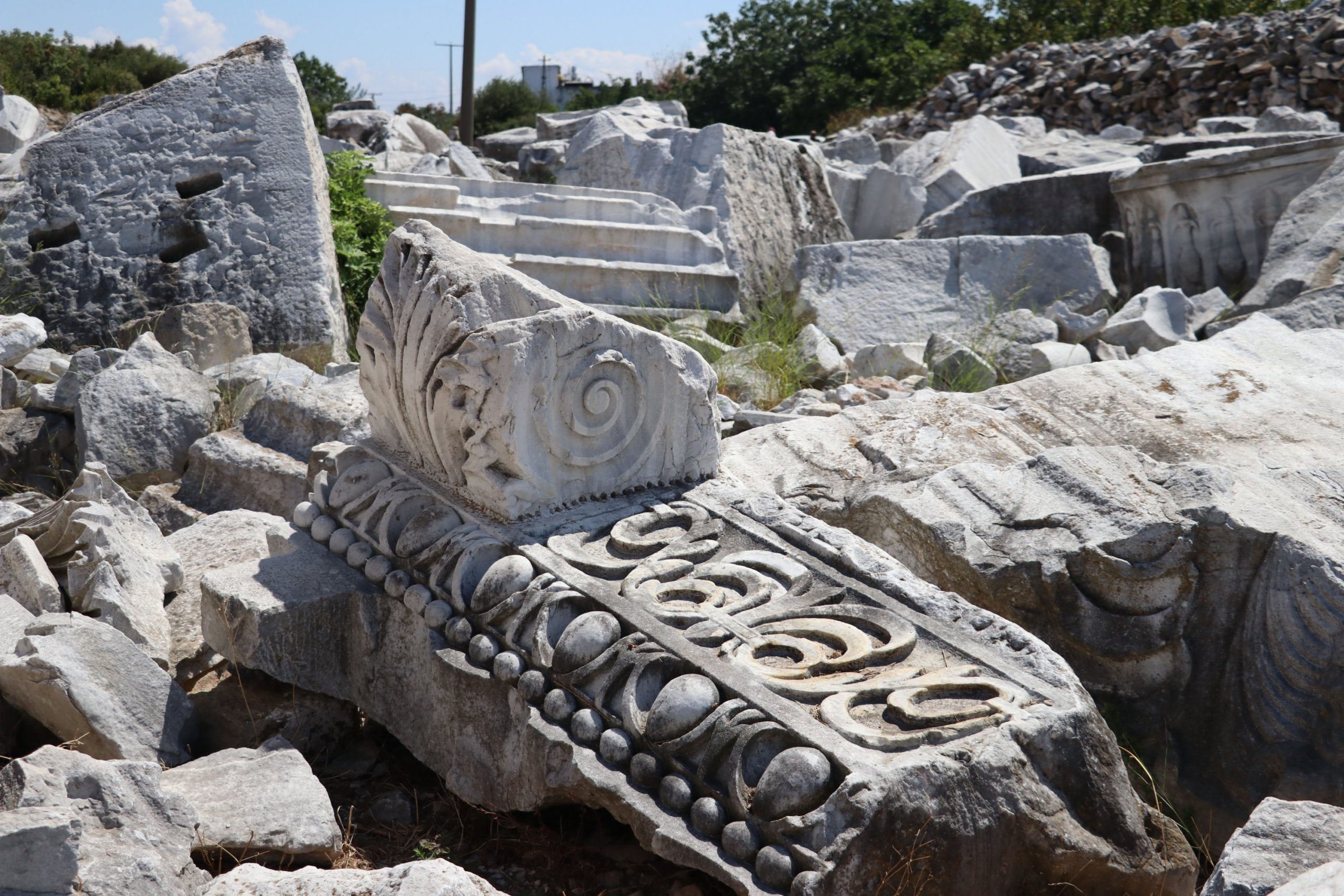 A stone part of the relief arch of the temple founded at the excavation site, Balıkesir province, western Turkey, Sept. 2, 2020. Image credit: AA

Cyzicus ancient city - located in the western Balıkesir province - was one of the oldest Ionian colonies on the coast of the Sea of Marmara. Once a magnificent temple of Hadrian stood there which was considered as one of the Seven Wonders of the World in the times of the late Roman Empire.

Cyzicus' ruins include the walls, dating from the fourth century, the remains of a Roman aqueduct, and a theatre. Recently, the team found large stone objects among the ruins of the temple of Hadrian, which is named after the Roman Emperor Hadrian.

Last year, the researchers discovered the northwest corner of the temple, which has helped them determine the exact dimensions of the temple

Estimated to be 116 meters (381 feet) in length and 62 meters in width, the temple is as large as the Temple of Artemis in the ancient city of Ephesus located in Izmir and the Temple of Apollo in the resort town of Didim in Aydın. The relief arch of the temple is longer than 1.60 meters and the column heads are 2.49 meters tall, which is one of the highest among their equivalents, Koçhan said in an interview with Anadolu Agency (AA).

He also said that there was probably an agora – central public space in ancient Greek city-states – just north of the temple. 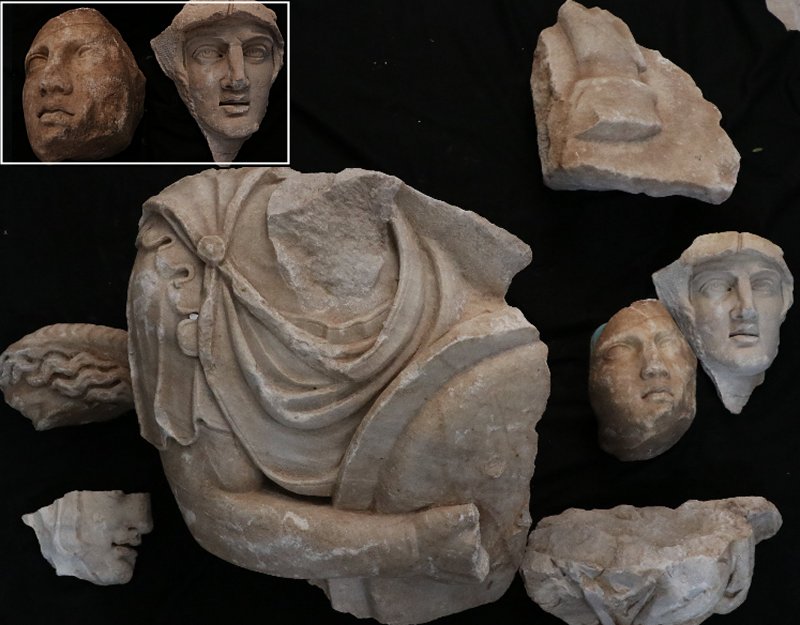 "In 166, philosopher Aristides of Athens gave a speech in this agora and said: 'You have built such a great temple that it replaced the mountains. Sailors know cities from mountains, but your city is known by the temple.' Indeed, the temple has a magnificent structure. The decorations in the temple are painted with red, blue, and gold gilding.

"During the excavations, we have conducted here, we have recently unearthed head parts belonging to the relief arch of the temple and encountered gilded paint on the hair of a woman's head sculpture,” explained Koçhan adding that construction of the temple could not probably be completed at the time, as cited by Daily Sabah.

The stone pieces found by the excavation team mostly belong to the relief arch of the temple, however. They also unearthed some sculptures belonging to the temple. Noting that they found these works in pieces, Koçhan explained.

“This is because this place was used as a lime quarry for hundreds of years in the ancient city of Cyzicus. Therefore, the people of the city broke the materials here and made some of it lime. What we can find today is the remaining parts of the works. For example, we have found the body of a figure with a shield, as well as parts of the head and arms of other figures.” 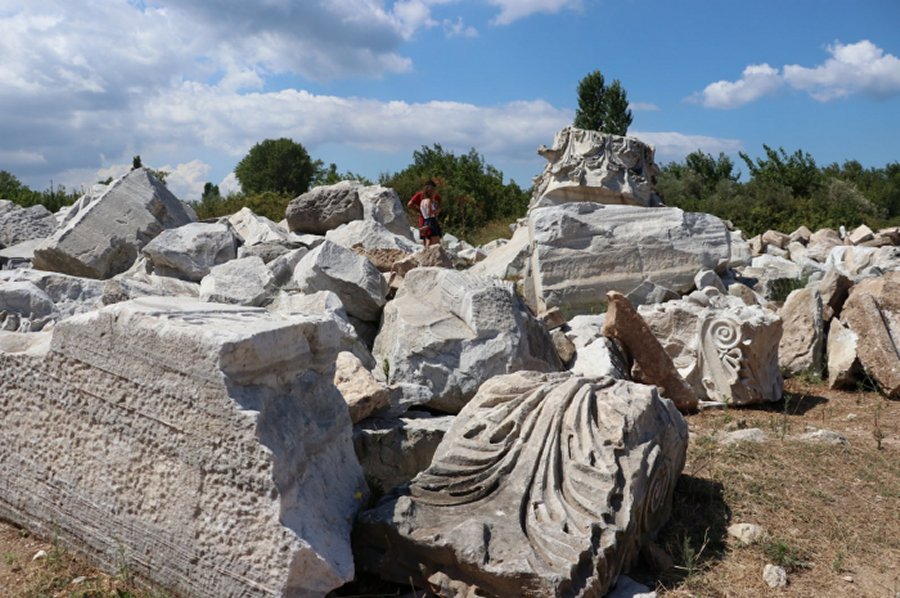 The recent excavations also revealed that the heads of the outer columns of the temple, built in the Corinthian order – which was the last developed of the three principal classical orders of ancient Greek and Roman architecture – were painted with gilding.

Telling that the roof tiles of the temple were made of marble, Koçhan said: “It is such a monumental building, but it was damaged by frequent earthquakes. The region came under the rule of the Seljuks in 1085 when Istanbul came to stand out. So, ports in Cyzicus, which is considered one of the important trade centers with its three historical ports, were closed over time, and the city came to lose its former importance. That is why it started to collapse.”

It is known that the oldest tribe of the ancient city of Cyzicus, whose history goes back to 5000 B.C., is the Doliones. The region, where some tribes immigrating from the Aegean and the Balkans settled in 1200 B.C., remained as the colony of Miletus, one of the most important cities of Ionia.

Cyzicus came under the Persian rule with the fall of the rich Lydian state to which it was affiliated in 546 B.C. The city gained its independence in 364 B.C. but later came under the rule of the Macedonians when Alexander the Great defeated the Persians in 334.

The region was finally seized by the Romans and began to lose its importance in the 300s. Subsequently, the city suffered great damage in two earthquakes in the 7th and 8th centuries and was almost destroyed in an earthquake in 1063.