Conny Waters - AncientPages.com - In 1502 A.D., Sultan Bayezid II was seeking a design for a bridge to connect Istanbul with its neighbor city Galata.

Leonardo da Vinci, already a well-known artist and inventor, came with an interesting idea, which he described in his letter to the Sultan. He also sketched the idea in a small drawing in his notebook. 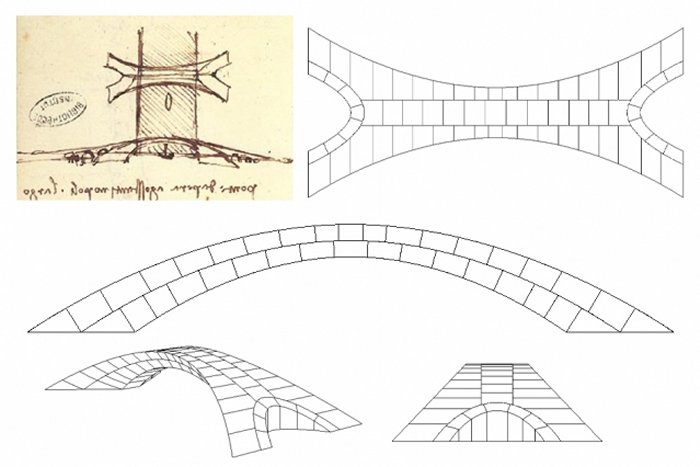 Leonardo da Vinci’s original drawing of the bridge proposal (top left), showing a bird's eye view at the top and a side view below, including a sailboat passing under the bridge. To the right and below that are drawings by Karly Bast and Michelle Xie showing how the structure could be divided up into 126 individual blocks, which were 3D printed to build a scale model. Image: Karly Bast and Michelle Xie

Recently, researchers at MIT focused their attention on Leonardo da Vinci’s vision of the bridge that would have been the world’s longest bridge. They began to wonder how thought-through Leonardo’s concept was and whether it really would have worked.

They analyzed the available documents and built a detailed scale model to test the structure’s ability to stand and support weight, and even to withstand settlement of its foundations.

“It was time-consuming, but 3D printing allowed us to accurately recreate this very complex geometry,” Karly Bast MEng ’19, working with a professor of architecture and of civil and environmental engineering John Ochsendorf and undergraduate Michelle Xie, said in a press release.

In Leonardo’s time, most masonry bridge supports were made in the form of conventional semicircular arches, which would have required 10 or more piers along the span to support such a long bridge. 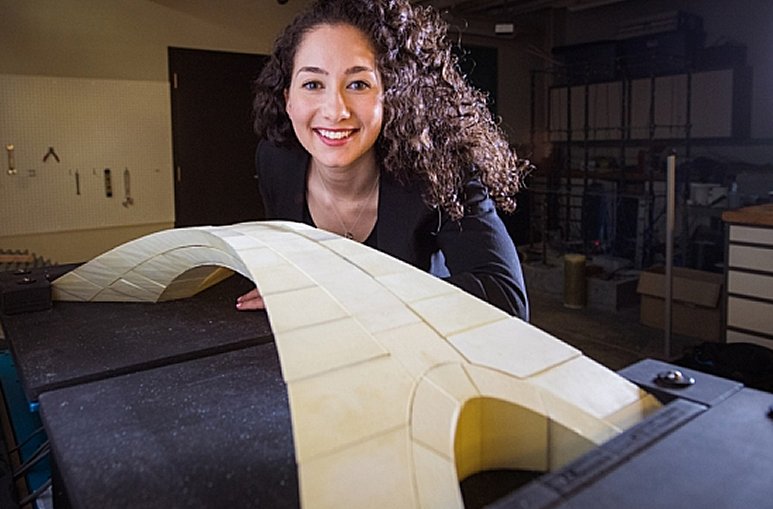 Recent graduate student Karly Bast shows off the scale model of a bridge designed by Leonardo da Vinci that she and her co-workers used to prove the design’s feasibility. Image: Gretchen Ertl

Leonardo’s bridge concept was dramatically different — a flattened arch that would be tall enough to allow a sailboat to pass underneath with its mast in place, as illustrated in his sketch, but that would cross the wide span with a single enormous arch.

The bridge would have been about 280 meters long about 10 times longer than typical bridges built of that time. The model created by researchers was built at a scale of 1 to 500 (making it about 32 inches long).

“Was this sketch just freehanded, something he did in 50 seconds or is it something he really sat down and thought deeply about? It’s difficult to know” from the available historical material, Bast said. But proving the effectiveness of the design suggests that Leonardo really did work it out carefully and thoughtfully.

“He knew how the physical world works.”

He also apparently understood that the region was prone to earthquakes, and incorporated features such as the spread footings that would provide extra stability.

Researchers tested the bridge’s resilience and the structure showed resistance to the horizontal movement, only deforming slightly until being stretched to the point of complete collapse.

The design may not have practical implications for modern bridge designers, but da Vinci’s design demonstrates remarkable capabilities of the early Renaissance’s minds.