A. Sutherland  - AncientPages.com - Pilgrimages to the temples of the Seven Gods of Happiness are among the most popular New Year's traditions in Tokyo and across the country. 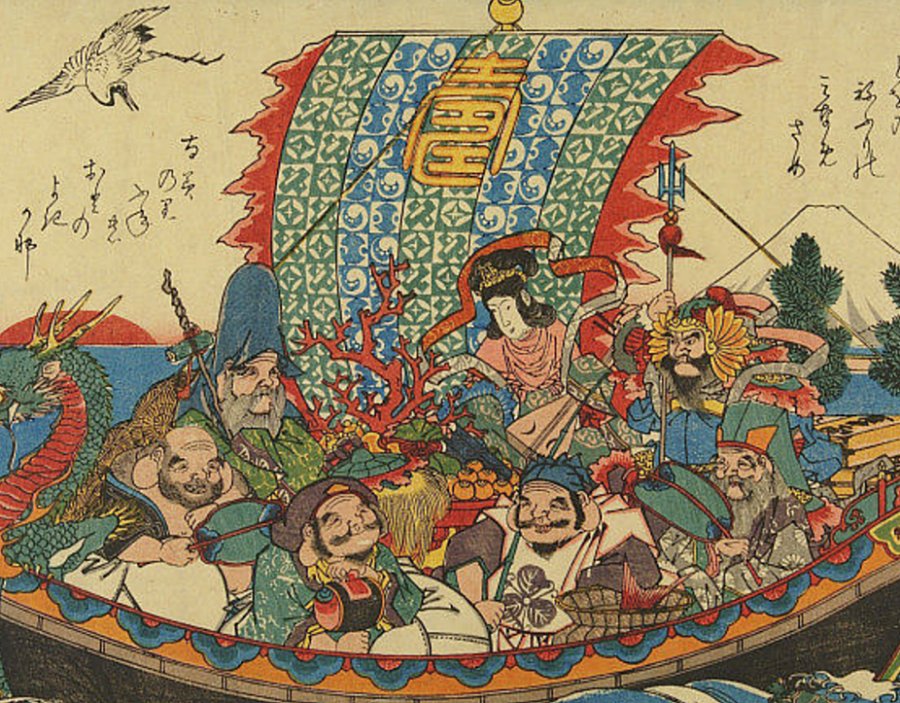 To be happy and ensure prosperity in the New Year, one should pay homage to the seven gods, who are usually worshiped in separate temples. Daikoku-ten, Ebisu, Benzai-ten, and Bishamon are of Japanese origin. Joined in the 16th century by three Chinese deities of good fortune - Hotei, Fukurokuju, and Jurogin - they became the Seven Gods of Fortune, or Happiness, especially to people in the business.

The first two popular Japanese gods with a long tradition are Ebisu and Daikoku, a cheerful pair of gods. One can see their beautiful depictions everywhere, in places like streets, train stations, bridges, entrances to restaurants. Even city districts are named after these gods. 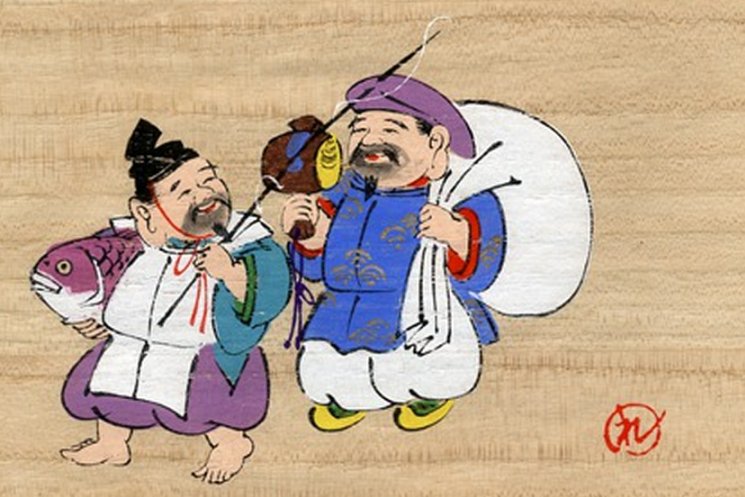 There are thousands of shrines dedicated to Ebisu and Daikoku throughout Japan; their images and their images unexpectedly emerge in business facilities and homes as well.

At Gokoku-in is enshrined the divinity known as Daikoku (Daikoku-ten), the guardian of farmers, cooks, and merchants. The obese joyful god usually holds a wooden hammer, which he uses to grant people happiness every time he strikes it. In his other hand, Daikoku wields a bag with a mysterious, unspecified treasure inside. This god resembles Ebisu in appearance, simply because he is his father.

Seiunji temple is the domain of the god Ebisu, who is the protector of merchants, fishermen, travelers, as well as farmers and their rice fields. Ebisu – God of prosperity and wealth in business - enjoys a lot of sympathy, mainly because of his cheerful and very optimistic smile.

His attribute is a cap on his head and large fish, which he either clutches under his left armpit or holds with his right hand on a fishing rod.

The Seven Gods of Happiness (Seven Gods of Fortune) are often depicted on the takarabune, a mythical ship piloted through the heavens by the Seven Lucky Gods. The ship filled with treasures which, according to traditional beliefs, arrive in human habitats on New Year's Eve and give prosperity, fortune, and extraordinary gifts to all those worthy of it.

In the past, children were reminded to put a picture of their likeness under their pillow before going to bed to gain the favor of the heavens. 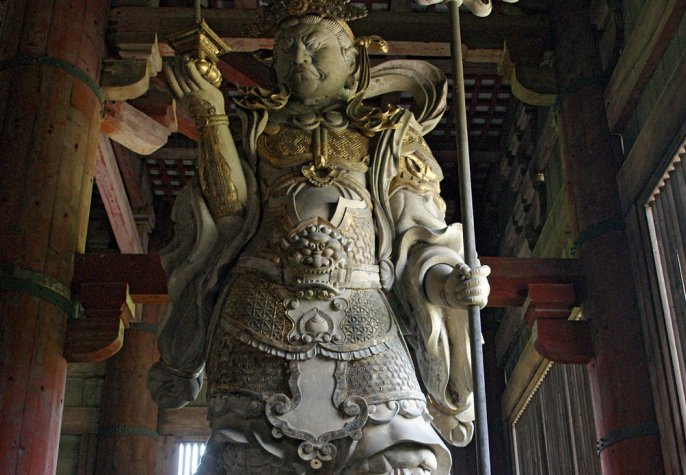 Bishamonten (in Shinto one of seven gods of luck. Originally the Indian god of Vaisravana from the famous epic  Mahabharata. The Guardian King of the North, one of the four fierce protectors of the cardinal directions (Shitenno). The guardian of immeasurable wealth. source

Ebisu and Daikoku are accompanied by Bishamonten, Benzaiten,  Jorujin, Fukurokuju, and Hotei.

Bishamonten is a patron of warriors, defender of peace, and guardian of rights and fortune in war and crucial battles. Tennoji Temple is a highly respected home to the god Bishamonten and located in the historic Yanaka Reien cemetery, where members of the Tokugawa family – famous for their 265-year-long shogunate of Japan - are buried.

The god Bishamonten (in Sanskrit: Vaisravana) is not of Japanese origin but can be traced back to Hinduism and associated with the Hindu god Kubera who in Hindu culture is known as Lord of Wealth. Adopted and highly revered as one of the Seven Gods Of  Happiness into Japanese culture, he is one of the Four Heavenly Kings, associated with dignity and authority, and protect those who follow the rules and behave correctly. As the patron of fighters, he is depicted with a hoop of fire, dressed in a helmet, armor, and like Buddha, is holding a pagoda in his left hand, while in his right hand, he holds a spear symbolizing the god's fight against the evil spirits. 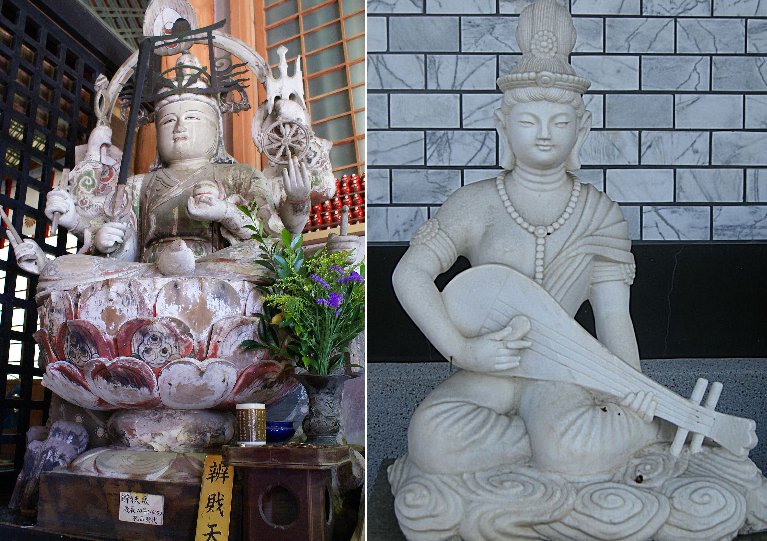 Benzaiten, the only female deity among the gods of happiness. Source

An ancient shrine Shinobazuike Bentendo, built in the early Edo (Tokugawa) period (1603 -868) of the history of Japan, belongs to Benzaiten (Benten, as she is most often known), who originates from the Hindu goddess Saraswati.

She is the Japanese Buddhist and Shinto goddess of right speech and music, and the only female deity in the group of Seven Happy Gods of Japan. Sometimes, she is depicted with two arms, sometimes with eight. She always carries objects symbolic of her meaning— for example, the "biwa," a traditional Japanese four-string lute for music, and the sword jewel for wisdom and sacred oaths. She protects artists, art, and especially music, and her worship started in Japan during the period from the 6th to the 8th centuries. 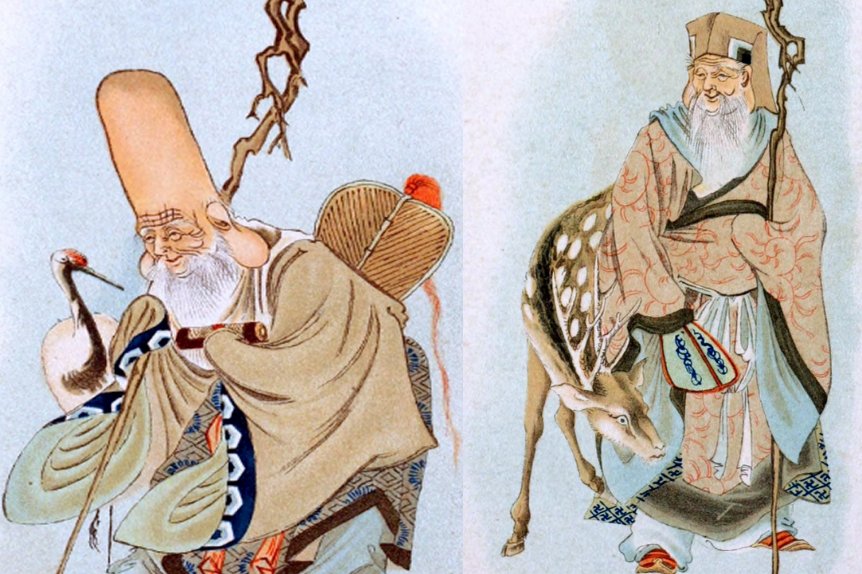 Fukurokuju is the God of Happiness, wealth, wisdom, longevity, and prudence. He originates in China and wears traditional Chinese robes. His attribute is a parchment scroll with the Holy truths and all the wisdom of this world, and a long gray beard making him easy to recognize.

In Japanese beliefs, he is the only god with the ability to resurrect the dead. He likes to play chess, so he is considered the patron of chess players. The god Yorujin (Juroujin), the immortal of the Northern Song dynasty (960–1127),  may even have been a historical figure of the period. He was believed to originate from the Chinese Taoist god, the Old Man of the South Pole. Yorujin usually looks almost the same as Fukurokuju and symbolizes longevity and wisdom. He is accompanied by a deer, ox, turtle, or crane, and in Japan, these animals symbolize long life. 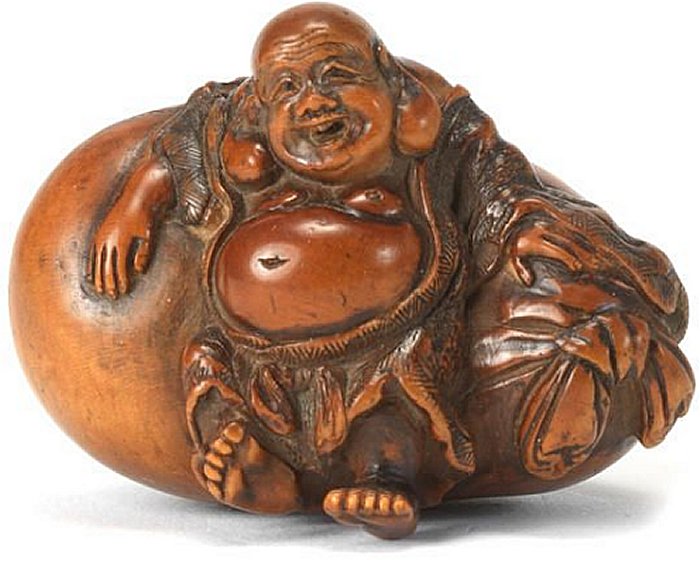 The last in the group is Hotei, the god of abundance, with a large fat belly and a funny, cheerful face. He likes to laugh, and even small things make him very happy. Hotei deserves to be a symbol of optimism and health.  He often has a sack of rice thrown over his back, intended for the poor and hungry.

His statues decorate the entrance to the Japanese shops and restaurants.  He is considered the patron saint of bartenders, and small children never avoid Hotei because he is an amusing figure, especially because of his enormous belly.