Conny Waters - AncientPages.com - A Nazi photo album that was made out of the skin and hair of World War II Nazi death camp victims has been found at an antique market in Poland. The album was put up for sale at the market and later spotted by a collector who noticed that the cover has a “tattoo, human hair and bad smell.”

The collector immediately brought the album to the Auschwitz Memorial Museum for analysis. Museum experts analyzed the cover and binding of the album, writes Daily Sabah. 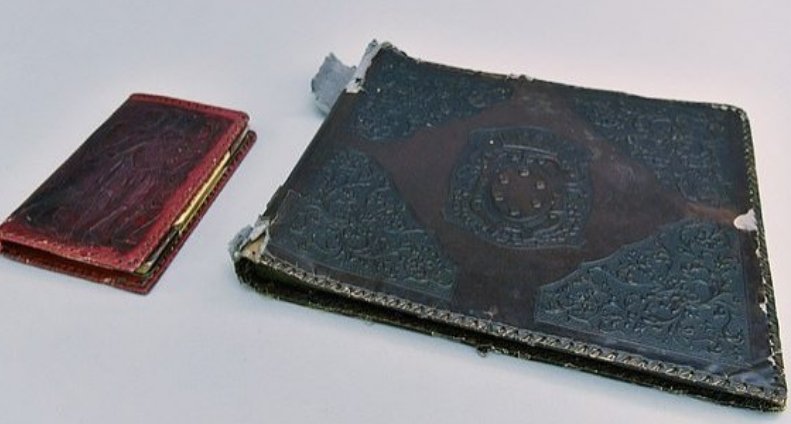 The photo album is pictured with a notebook. Courtesy of Auschwitz Memorial Museum.

After examination, they concluded that the album was made by using the skin of inmates murdered at the Buchenwald concentration camp in Germany. They said that it was “without doubt proof of a crime against humanity.”

Buchenwald was Adolf Hitler’s first concentration camp, established in 1937, and was known for its executions, experiments, horrible conditions and the depravity of its guards. One of those guards was Ilse Koch, known to inmates as the “Bitch of Buchenwald.”

Some say that Ilse Koch, the wife of camp commandant Karl-Otto Koch, had male prisoners with interesting tattoos murdered and then had their skin turned into interior design items, including books, albums, table covers, and lampshades. The thumbs were used like light switches.

The newly discovered album contained more than 100 postcards with views and panoramas.

Those who survived Buchenwald said Koch was helping Dr. Erich Wagner collect human skin for his Ph.D. thesis. Wagner used about 100 unique skins for designing gifts. He committed suicide after his capture by American troops. Ilse Koch was arrested by the U.S. and sentenced to life in prison. She committed suicide in her cell in 1967.

About 6 million Jews were systematically murdered by Nazi Germans and their collaborators between 1941 and 1945 across German-occupied Europe.