AncientPages.com - On June 14, 1834, the first U.S. patent for a practical underwater diving suit was issued to Leonard Norcross of Dixfield, Maine. It is the first closed helmet diving apparatus; the helmet was made of lead and the air pipe from the surface entered the helmet on top.

Helmet and suit were attached by a watertight joint and as soon as the diver closed the valve, the whole suit was filled with air.

It has been suggested that Norcross could have been the inventor of the first closed diving dress. 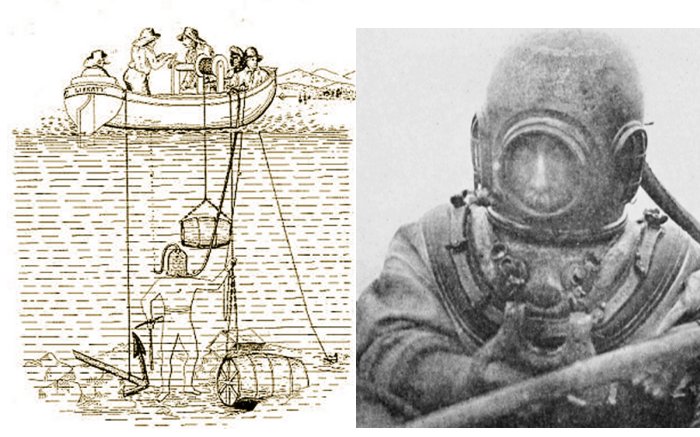 Norcross was born on June 18, 1798 in Readfield,Maine, United States. His father died when he was only three years old, he lived with his mother  and later with aunt in Greene, where he attended school, learned to be a millwright and a mechanic.

While working as a young man, he continued independent reading and study, eventually returning to school followed by teaching for several years.

He later moved to Dixfield where he invented several useful machines and obtained patents on some. One was filed in the name of Hiram A. Pitts of Winthrop. Fitz-Gilbert claims “He was wrongfully defrauded of his rights in this patent.

Norcross called his underwater diving suit - a "Diving Armor." He designed an airtight leather outfit with a brass helmet connected via a rubber hose to an air bellows pump on a boat. To reduce buoyancy, the feet were weighted with lead shot. In May 1834, one month earlier, he tested the practical diving suit in the Webb River.

Norcross named his son Submarinus in honor of the achievement. His invention was only an improvement on earlier design of the first truly effective diving suit with pump,which is attributed to an Englishman, Augustus Siebe, who designed it in 1829 and was entrusted with equipping the French Navy until 1857.

With Norcross’s improvement, divers could now bend over and even lie down underwater without cutting off their air supply.

Not wanting to be outdone by an American inventor, Siebe modified his open diving suit in 1837, making it watertight by using Norcross's exhaust suit and modifuing it so that it could be controlled by the diver who expelled air only as necessary.