A.Sutherland  - AncientPages.com - According to Hindu lore, Ravana was once the king of a flourishing kingdom of Lanka, a golden Celestial City atop a mythical mountain of Hindu legend, Mount Trikuta, one of twenty that serve as foothills to the greatest mountain in Hindu cosmology, Meru.

As the story goes, Trikuta, located in the south of India is inhabited by several gods. Brahma was Ravana's great-grandfather who made him so powerful that only Shiva could kill him. 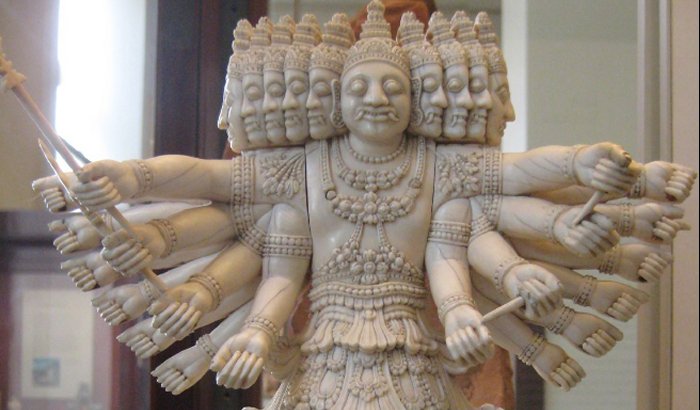 Some myths confirm that the Rakshasas are said to be a certain sect of Asuras, or antigods, born from the god of creation, Brahma when he was angry while reciting the Vedas.

A great scholar of the Vedas, Ravana was a shapeshifter who possessed the ability of flight, invisibility and had powers over rain, water, and fire. Brave, smart, and skilled in different kinds of weapons, Ravana had powers that could help him to achieve the best in his life.

Aware of his supernatural abilities, he could use them for good and be a true hero, but he wasn't willing to do it. As a pleasure seeker being aware of his strong weaknesses, he wanted to use his gifts and abilities for his own personal contentment.

Immoral, corrupt, jealous of nature, and frequently angry, Ravana became an evil-doer, a monster that terrorized the earth and its inhabitants.

From his powerful city of Lanka, Ravana and his demon army had spread out across the world, killing and eating people. As a demon, he developed a strong addiction to the drinking of human blood and could rip a man's soul right from his body.

Ravana had many evil deeds on his conscience. Among others, he abducted Rama's beautiful wife, Sita. Using one of his many disguises, Ravana came to Sita as a hermit and before she realized who really visited her, he snatched her up and flew through the air back to his city of Lanka.

According to the Ramayana, the great epic story of Prince Rama, an incarnation of Vishnu, the demon Ravana held Sita prisoner. Soon Rama accompanied by Lakshmana, his younger brother and aide were able to start the pursuit, but unfortunately, they had no trail to follow.

Finally, the brothers met a great monkey Surgriva, who was the son of Surya, the Vedic sun god who represented immortality. Sugriva offered to help Rama search for Sita if Rama would help him regain his monkey kingdom. 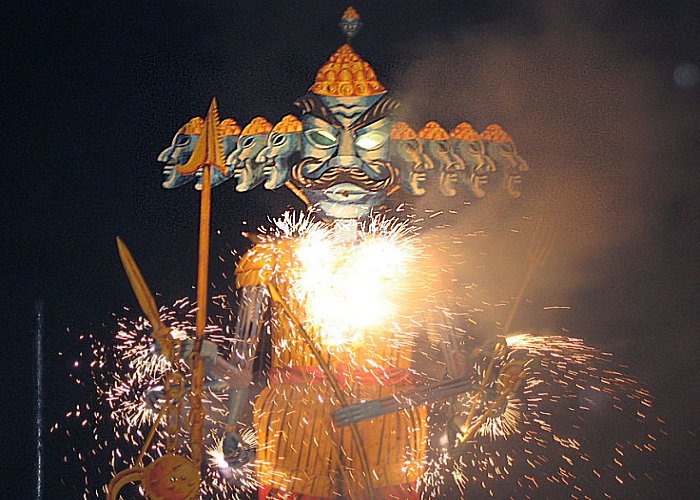 An effigy of Ravana with burning sparklers on Dusshera. Dashehra Diwali Mela in Manchester, England, 2006. Source

Rama agreed, and together they returned Sugriva to the throne.

War With Ravana The Demon King

The Epic Ramayana narrates that the army of bears and monkeys followed a Hindu god, Hanuman, and Rama to the coastline. They built a bridge to Lanka and Lord Rama could in this way cross the waters and rescue his abducted wife, Sita.

For days, Rama and his monkeys and bears fought against the demons. Rama killed all of Ravana's sons and most of his brothers, but also Rama lost many soldiers. So Hanuman flew off to the Himalaya Mountains to find a magical plant that could bring them back to life, but it wasn’t easy to find it in the darkness.

Finally, he was successful and returned back to heal all the fallen monkeys and bears.

Rama In Confrontation with Ravana

The gods were long unable to stop Ravana’s terror because once in a moment of weakness, Brahma had made Ravana immune to the attacks of both gods and demons. 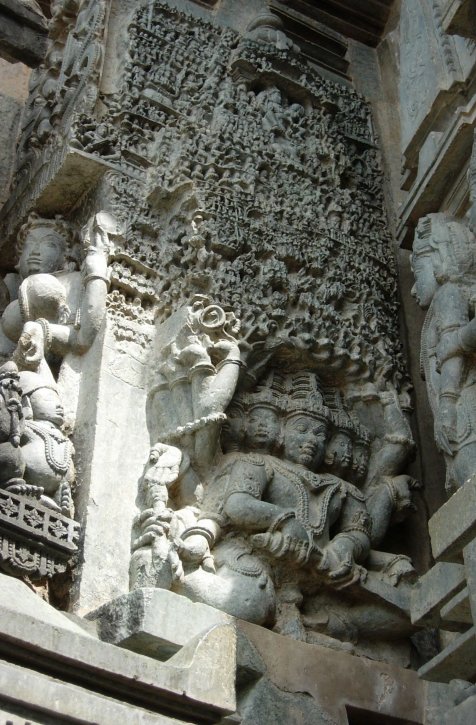 Ravana believed he was invincible even in this deadly confrontation with the god Rama. He and Rama fought, each one sending showers of arrows at the other.

Finally, in retaliation, Rama killed Ravana with an arrow through the heart of the demon king.

The great god Rama was victorious; he took his lovely wife Sita back home. Rama reigned for 11,000 years. He later waded into the holy River Ganges and returned to heaven as Vishnu, the Lord of the World, according to the Ramayana.