AncientPages.com - More fascinating discoveries have been made in the land of the Pharaohs and archaeologists announced that two colossal statues of Pharaoh Amenhotep III in Egypt's famed temple city of Luxor will be added to an existing pair of world-renowned tourist attractions - known as the Colossi of Memnon. 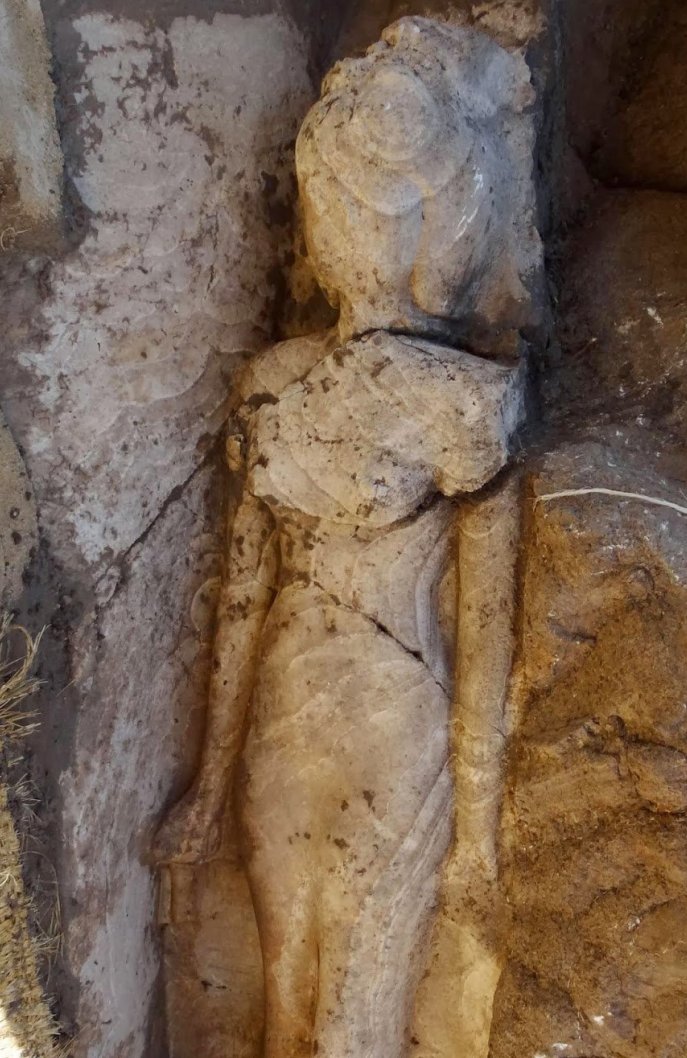 The two monoliths in red quartzite were raised at what European and Egyptian archaeologists said were
their original sites in the funerary temple of the king, on the west bank of the Nile.

The temple is already famous for its existing 3,400-year-old twin statues of Amenhotep III known as the colossi of Memnon.

German-Armenian archaeologist Hourig Sourouzian, who heads the project to conserve the Amenhotep III temple said that "the world until now knew two Memnon colossi, but from today it will know four colossi of Amenhotep III."

The existing two statues, both showing the pharaoh seated, have world-wide popularity. However, the two restored additions have weathered severe damage for centuries, according to Sourouzian.

"The statues had lain in pieces for centuries in the fields, damaged by destructive forces of nature like earthquake, and later by irrigation water, salt, encroachment and vandalism," she said, as behind her excavators and local villagers washed pieces of artifacts and statues unearthed over the past months. 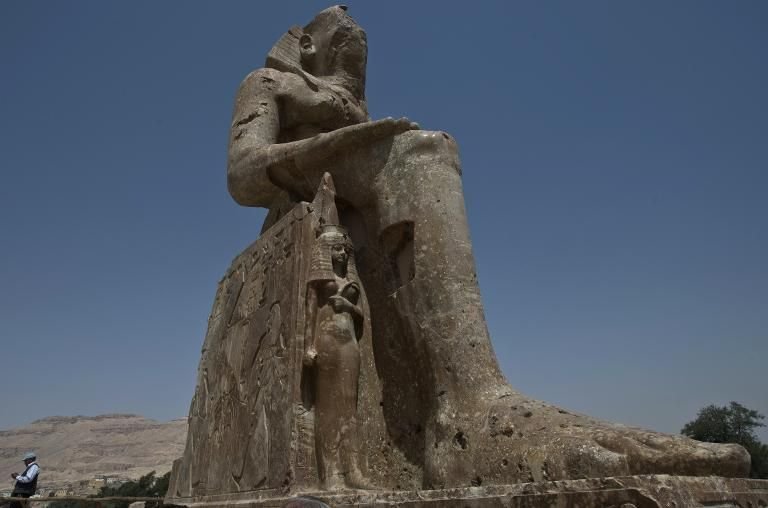 A statue of pharaoh Amenhotep III and his wife Tiye are presented in Egypt's temple city of Luxor, March 23, 2014. source

"This beautiful temple still has enough for us to study and conserve."

One of the "new" statues has a body weighing 250 tones and depicts the pharaoh seated with hands resting on his knees. It is 11.5 meters (38 feet) tall, with a base 1.5 meters high and 3.6 meters wide.

Archaeologists said with its now missing double crown, the original statue would have reached a height of 13.5 meters and weighed 450 tonnes.

The king is depicted wearing a royal pleated kilt held at the waist by a large belt decorated with zigzag lines. Beside his right leg stands nearly a complete figure of Amenhotep III's wife Tiye, wearing a large wig and a long tight-fitting dress.

A statue of queen mother Mutemwya, originally beside his left leg, is missing, archaeologists informed.

The throne itself is decorated on each side with scenes from that era, showing the unification of Upper and Lower Egypt. The second statue, of Amenhotep III standing, has been installed at the north gate of the temple. The team of archaeologists also showed several other ancient pieces of what they said were parts of other statues of the ancient ruler and his relatives, including a well-preserved alabaster head from another Amenhotep III statue.

"This piece is unique, it is rare, because there are not many alabaster statues in the world," Sourouzian told AFP.

The head, shown briefly to some reporters and fellow excavators, has also weathered centuries of damage. Its nose, eyes and ears are intact, and some signs of restoration centuries ago are clearly evident, archaeologists said.

Close to the head lies a statue of Princess Iset, Amenhotep III's daughter.

Sourouzian said the aim of her team's work was to preserve these monuments and the temple itself, which according to her had suffered at the hands of "nature and mankind".

"Every ruin, every monument has its right to be treated decently," said Sourouzian, whose dream as a student was to conserve the Amenhotep III temple. The idea is to stop the dismantling of monuments and keep them at their sites," she said, adding that what was required was steady "international funding" to conserve such world heritage sites. The ongoing work to conserve the Amenhotep III temple is entirely funded through what she said were "private and international donations".

Pharaoh Amenhotep III inherited an empire that spanned from the Euphrates to Sudan, archaeologists say, and he was able to maintain Egypt's position mainly through diplomacy. The ruler became king at the age of around 12, with his mother as regent. Amenhotep III died in around 1354 BC and was succeeded by his son Amenhotep IV or better known as Akhenaten.