AncientPages.com - The Vikings invaded England in the 9th and 10th centuries. They plundered, raped and burned towns to the ground. Or at least, this is the story we know from school and popular culture.

Nevertheless, the reported plundering and ethnic cleansing are probably overrated. The Vikings simply had worse ‘press coverage’ by frustrated English monks, who bemoaned their attacks.

In recent decades, ground breaking research in DNA, archaeology, history, and linguistics provide nuance to these written records. And together they provide a much clearer picture.

An Anglo-Saxon helmet from the British Museum in London. Was the warrior who owned this helmut part of a more terrifying and brutal invasion than the Vikings? (Photo: Shutterstock) via ScienceNordic

They indicate that the Vikings were not the worst invaders to land on English shores at that time. That title goes to the Anglo-Saxons, 400 years earlier!

The Anglo-Saxons came from Jutland in Denmark, Northern Germany, the Netherlands, and Friesland, and subjugated the Romanized Britons.

This means, if the Viking Age is defined by numerous migrations and piracy (according to most scholars, Viking means ‘pirate’), the Viking Age should start earlier than 793 BCE. It should really start already around 400 BCE.

Here, I outline the various sources that indicate a much more systematic colonisation that started with the Anglo-Saxons, and how recent research when viewed in its entirety, gives us a much clearer understanding of the impact that the Anglo-Saxons had before the Vikings arrived.

One support for this contention is the impact or rather the lack of impact that the Viking Old Norse had on contemporary Old English language of the Anglo Saxons in the 9th and 10th centuries. This should be compared to the absence of Celtic language in England in the 5th and 6th centuries after the Anglo-Saxons had arrived.

So, did the Anglo Saxons have the same sort of impact on the Britons that 19th century Europeans had on Native Americans? And are we looking at ethnic cleansing in the 5th - 8th centuries?

An Anglo-Saxon sells a horse to a Viking

If the Anglo-Saxons eradicated the Celtic language, the Viking’s impact was significantly less. Linguists do see some influence from the Old Norse of the Vikings in the Old English language. But it doesn’t come close to the eradication of Celtic by the Anglo-Saxons. 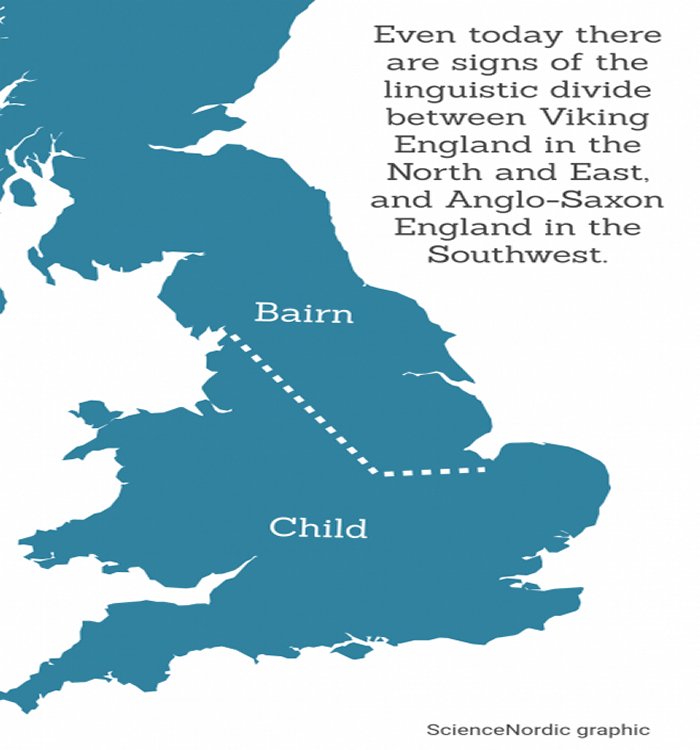 The Viking's did not irradiate Old English -- a sign of their limited impact compared to the earlier Anglo Saxon invasion. But remnants of their influence are still visible in modern English. For example, north and east of the line that demarcates the Danelaw, you are likely to hear 'bairn' instead of 'child,' which is more closely related to the Danish 'barn.' Other similarities include ’armhole’ (Danish: armhole) for armpit and ‘hagworm’ (Danish: hugorm) meaning adder. (Map: ScienceNordic, based on an original in'Word Maps. A dialect Atlas of England').

Old Norse did not eradicate the Old English language; Old English was simplified or pidginised because the Anglo Saxons and the Vikings were able to coexist for a time.

An example could be somewhere in Eastern England in the 9th century where an Anglo-Saxon met a Norseman.

The Anglo-Saxon wants to sell the Norseman a horse to pull a wagon. In modern English he’d have said the equivalent of “I’ll sell you that horse that drags my wagon.” In Old English it would have sounded like this: “Ic selle the that hors the draegeth minne waegn.”

The Norseman on the other hand would say “Ek mun selja ther hrossit er dregr vagn mine.”

One says “waegn” where other says "vagn,” meaning wagon.

One says “hors” for horse, and “draegeth” for drag, while the other says “hros” and ”dregr.”

The point is that there are differences but they would have understood each other. What is lost in translation are the grammatical elements.

Therefore, according to some linguists, English was simplified because of the meeting between two closely related languages. The plurals slowly became “-s.” ”Stone,” which in Old English is “stan” in singular, and “stanas” in the plural developed to “stone” and ”stones.” Hors in the singular became “horses” in the plural.

The same process that changed the language spoken in Britain 1,200 years ago also led to of the pidginisation of languages in the old English and French colonies of Africa, the Caribbean, and the Pacific, 500 years ago.

The language simplified, so one could ‘do business’ and communicate when people and languages met. They did not want to be cheated in the horse trade, so to speak.

Numerous archaeological finds of settlements and graves in England suggest that many Scandinavians settled in the Eastern part of England, in what they called Danelaw and in parts of Scotland.
On the other hand, the Old English of the 9th century was not assimilated into Old Norse, unlike the earlier irradiation of Celtic by the first Anglo Saxon conquests.

Put simply, the impact of Viking immigration was not as massive as the arrival of the Anglo-Saxons in the 5th century. And this is now backed up by a large-scale DNA analyses of the modern British.

In fact, some scholars have suggested that the Anglo-Saxons practiced a sort of apartheid against the local Celtic-speaking people between the 5th and 9th centuries, where they probably lived apart, or only had limited interaction. 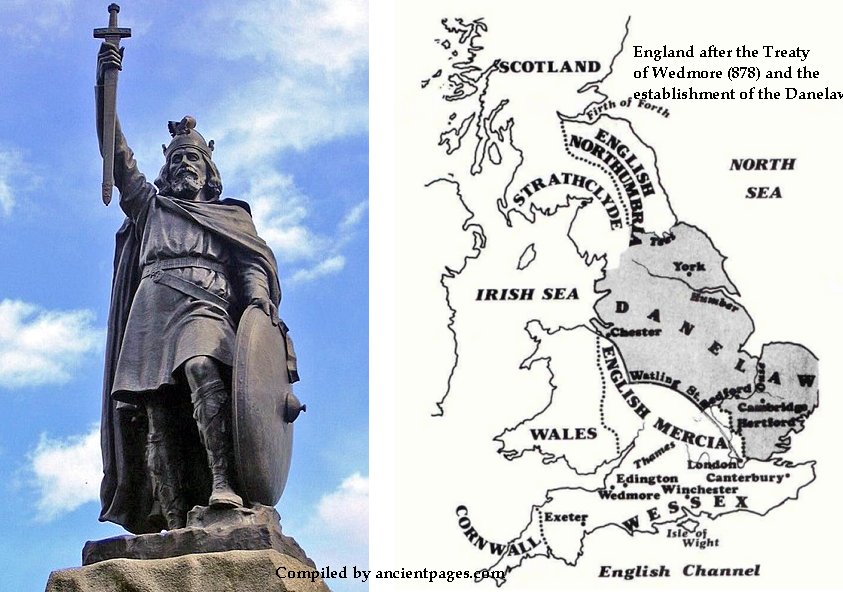 Left: Alfred the Great's statue at Winchester. Hamo Thornycroft's bronze statue erected in 1899. Image credit:Odejea/wikipedia; Right: England after the Treaty of Wedmore (878) and the establishment of the Danelaw.

As we saw in South Africa from 1948 until Nelson Mandela came to power in 1994, apartheid was, however, hard to enforce long-term.

Ethnic cleansing by the Anglo-Saxons is a likely alternative scenario, as suggested by the fact that Celtic culture and language did not survive outside of Wales, Scotland, and Ireland.

Additionally, the Romano-British were less well organised and lived in a vacuum after the Romans left Britain in the 5th century, whereas the later Anglo Saxon kingdoms of the 9th century were better organised. Thus, Anglo-Saxon England was harder to conquer in a similar way. The Vikings most likely married into Anglo-Saxon families over time, yes maybe the children of the Scandinavians were raised by Anglo-Saxon servants, as was the case among white American children in the southern states, where African slaves took care of white children.

In the U.S., white children often adopted words from African Americans, before they were sent to boarding schools in the North to learn ‘proper’ English.

Whether poor servants played a similar role among the Vikings in Danelaw England we do not know. But the lack of boarding schools for re-education back home could explain why Old Norse did not gain too much ground!

Additionally, by intermarrying there was no way to maintain the Old Norse language in England.

However, some linguists suggest that if Scandinavians and Anglo-Saxons had not met up and in that process modified each other’s languages, people in England today would speak something more similar to Frisian or Danish, depending on whether the Anglo-Saxons or Vikings had won the language clash.

Place names indicate the presence of Scandinavians and Anglo-Saxons

The word ’by’ is in Sweden still a small hamlet as opposed to a ‘stad’, which is a city. -wick is also seen as of Scandinavian origin like in Swainswick, and -thorpe and -toft. The last names suggest that the Scandinavians initially founded a number of field systems, which indicate that they settled on land that was more marginal. Later the fight for land increased.

King Alfred stopped the advance of the Vikings

But all of this is not to underestimate the immediate threat that the Viking’s posed to life in 9th century England.

In CE 878 the Viking invasions became so dire that the Anglo-Saxons were close to being overrun by the Scandinavians, just as their Anglo-Saxon ancestors had besieged the Britons 400 years earlier.

King Alfred of Wessex was forced into hiding in a bog in Somerset with a small group of men, and many omens suggested that the future England was going to be inhabited by Old Norse-speaking peoples.

However, Alfred succeeded in gathering an army from Somerset, Wiltshire, and Hampshire. He made a surprise attack on the Danes at the battle of Ethandune, a battle that to this day is commemorated by a large white horse carved into the hill.

After the battle, Alfred settled the dispute by the so-called Treaty of Wedmore. He forced the Danes to withdraw their army from Wessex. In addition, their leader, Guthrom, was christened.
His victory saved Wessex and perhaps even the English language.

Alfred drew a line across the country, behind which he settled to the South, and the Danes settled towards the Northeast. Everything behind the frontier was the Danelaw.

This frontier ran northwest along the old Roman road from London to Chester, west of Rugby, a Nordic place name, and south of present day Liverpool. Dialects still spoken throughout England today point to the dominance of a Danish speaking population east of this line.

Alfred’s policies of identity kept the Danish language at bay

Alfred was now much more alert and he mobilised the English against the Danes. He also rebuilt a number of monasteries and schools.

He started using English instead of Latin as a basis for further education, and he initiated the first translation of Bede’s ‘The History of the English.’

He knew that without a history, the English had no identity against the Danes. Thus, he saved the English language against further pidginisation.

The Vikings had a bad (English) press

First, they did not take over the entire country of England, neither linguistically, materially, nor genetically.

Second, all analyses show that the present population of the East of England has more in common with the peoples on the North Sea coast (Northern Germany and Netherlands), one of the places of origin of the Anglo-Saxons, than they do with the present day population of Scandinavia. This is supported by all sources, including DNA.

Finally, the same study suggests that the flow of Anglo-Saxon immigration must have been so massive that they came to consist of up to 40 per cent of the population in England at the time. The Vikings did not come close to that. And where the earlier Anglo-Saxons apparently did not mix with the native Britons, the Vikings did exactly that with the now Anglo-Saxon English.
By these measures, the Vikings were not as bad as the name and the written sources suggest.

If the Viking Age is to be defined as the period when piracy, migration, and ethnic cleansing, was predominant, the period should start much earlier.

Of course, there is more to the Viking Age than piracy and pillaging. But this is another story for another day.

Read this article in Danish at ForskerZonen, part of Videnskab.dk