AncientPages.com - Etzanoa, a Native American city has been missing for 400 years and not it has finally been found!

The long-lost city was the size of Cahokia, a prehistoric metropolis north of Mexico. When the Spaniards entered Etzanoa, they were astounded by its size. There were as many as 2,000 houses that could hold 10 people each. The conquistadors said walking through the entire city would take two or three days. 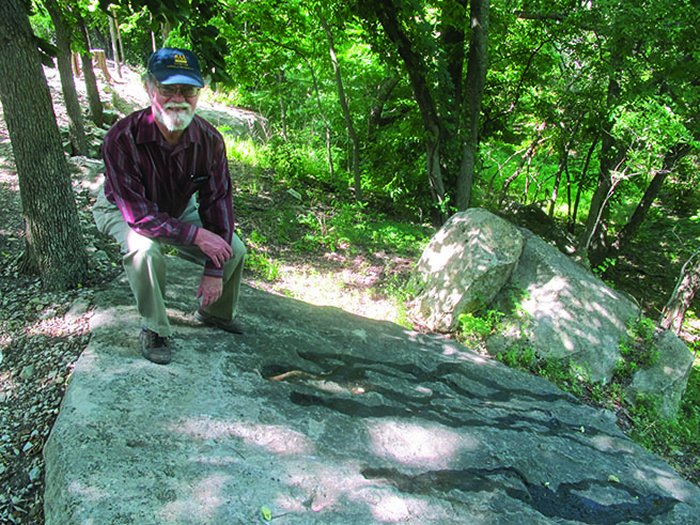 Wichita State anthropology professor and archaeologist Don Blakeslee was reading a new translation of an old account of a 1601 hostile encounter between Spanish explorers and Native Americans near the site of a “great settlement.” No one knew for sure just where this was, although there were clues. Image credit: The WSU Alumni Association

Then, something happened. Archaeologists and historians have been looking for the lost city of Etzanoa for decades. What happened Etzanoa’s inhabitants? Why were there no traces of the city? The mystery has finally been solved.

Donald Blakeslee, an anthropologist and archaeologist at Wichita State University says he has found evidence of the ancient native American settlement of a massive town stretching across thousands of acres of bluffs and rich bottomland along two rivers in Arkansas City.

This is an extraordinary discovery that could put south-central Kansas on the map as the second-biggest settlement of Native Americans found in the United States.

Finding the lost city of Etzanoa took many years and Blakeslee had help from Adam Ziegler, a high school kid who made the link that cinched the verification of Etzanoa. 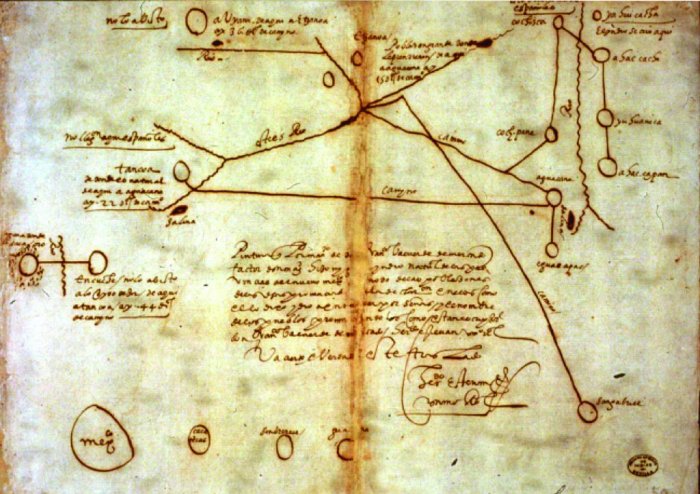 This map was drawn in 1602 by a Wichita Indian who was captured by the Spanish. The circular figures represent native settlements. Etzanoa is depicted by two circles with a diagonal line between them at the top center of the map. Image Credit: General Archives of Maps and Plans, Mexico City. Image credit: Archaeological Conservancy

Blakeslee relied on accounts of soldiers who served under the Conquistador Juan de Onate, the founding governor of the colony of New Mexico. Onate’s soldiers said they fought a battle 60 years after Coronado, somewhere in the Great Plains.

The battle reports said Onate led 70 soldiers from New Mexico and found a vast town at the junction of two rivers. According to these accounts, the Wichita tribe fled, evacuating to the north as soon as the Spaniards entered their home town, Etzanoa. 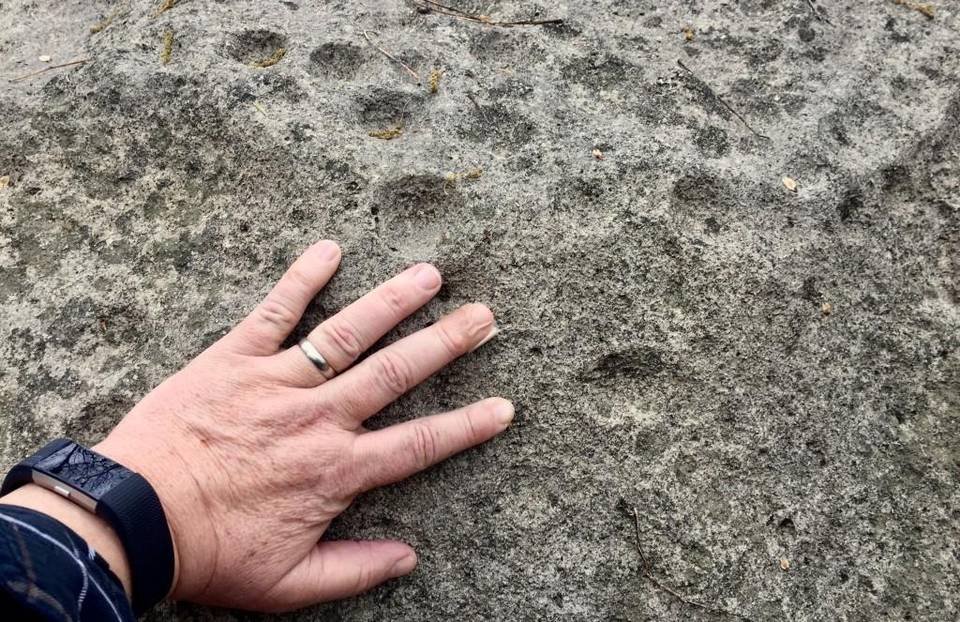 Women from the Wichita Nation pecked out these sacred holes in a limestone boulder hundreds of years ago, anthropologist Donald Blakeslee says. They’d use a stone hammer, peck out a hole, fill the hole with water — then drink the water, saying a prayer for a successful pregnancy. Roy Wenzl The Wichita Eagle

Onate sent armed patrols into the empty town and the sight of this abandoned city made the Spaniards very nervous. They counted 2,000 big beehive-shaped homes, clusters of these homes surrounded by cornfields, but there were no people there.

When the Spaniards turned to the South, they suddenly came face to face with hundreds of warriors, firing arrows and charging at Onate’s small Spanish troop. 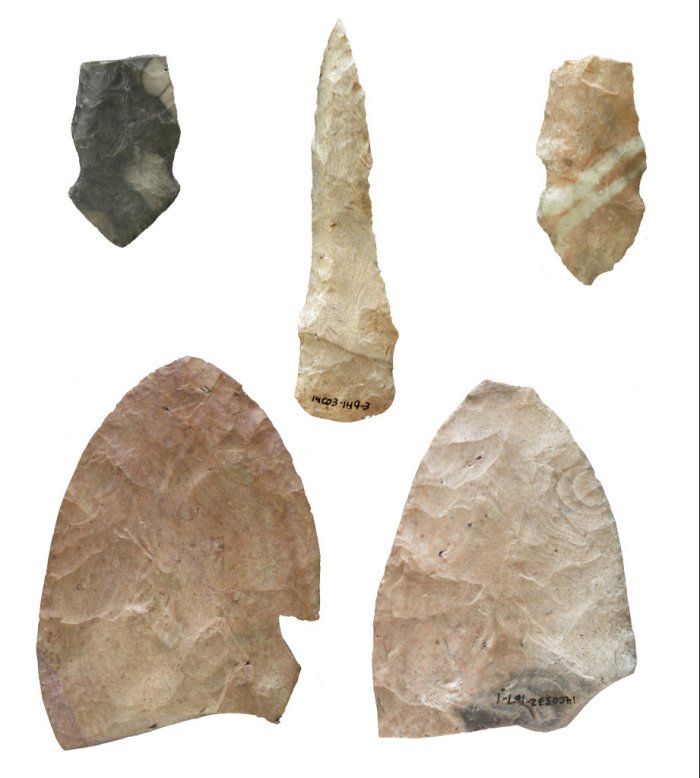 These protohistoric Wichita stone knives were recovered from the site by the Kansas State Historical Society. Credit: Donald Blakeslee

The attackers were Escanxaques, a tribe enemy to the Wichita. They had come to attack Etzanoa and they were now attacking the Spanish troops. Before the Escanxaques retreated, they had wounded 60 out of 70 Spaniards.

Sculptors from the Wichita Nation carved the images hundreds of years ago. There are small holes with basins just below them, and from the basins, curved miniature channels, some shaped like stairsteps move down the sloping face of the stone. He’d discovered an interactive sacred shrine, still functional after four centuries.

“It is in their religion that everything is in three layers — the sky, this world, and the underground — and that water moves between these worlds,” he said.

The shrine was rooted deeply in the religious beliefs of the Wichita Nation. Moving water was sacred. Believers also thought they could look into a pool on a moonlit night and talk with spirits and souls in the reflections they saw. Blakeslee keeps finding more images and thinks it’ll be possible to record more about the lost mythology of the Wichita.

Many stones beside springs were sacred.

The Wichitas Are Intrigued And Concerned

Blakeslee says the artifacts he and Ziegler discovered in the past two years show the old stories were true, and that between the years 1450 and 1700, at least 20,000 ancestors of today’s Wichita Nation thrived in and near what is now Arkansas City. 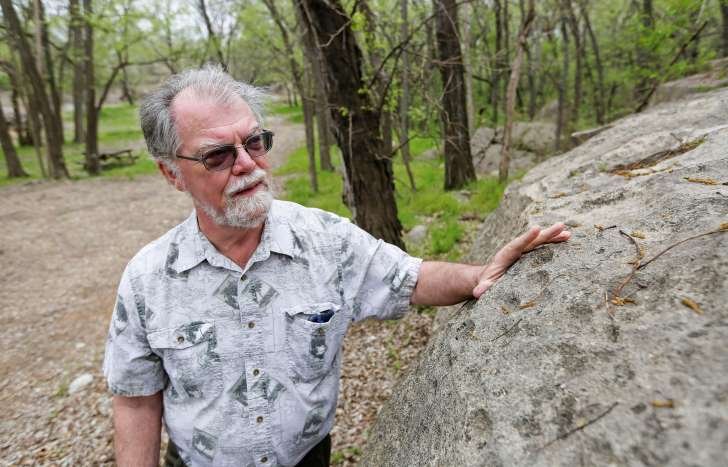 Modern-day Wichitas number about 3,000, based now in Anadarko, Okla., said Gary McAdams, who has held several leadership positions with the Wichita and Affiliated Tribes.

The Wichita are intrigued — and concerned — by what might come next, McAdams said. Blakeslee has consulted with them for years, telling what he’s found, inviting them to visit sites at Arkansas City and at the 160-foot-long serpent symbol still visible in the pasture grass in Rice County. Wichitas have helped on some of his digs.

“We would have some concern about how they go about developing their thinking about Etzanoa as a tourist center,” McAdams said. “We are supportive of any respectful endeavor they want to pursue there — but would want to provide our input.”