AncientPages.com - On January 22, 1506, a group of 150 Swiss mercenaries led by their Captain Kaspar of Silenen in the Canton of Uri, entered the Vatican for the first time through the „Porta del Popolo“.

They were blessed by Pope Julius II. 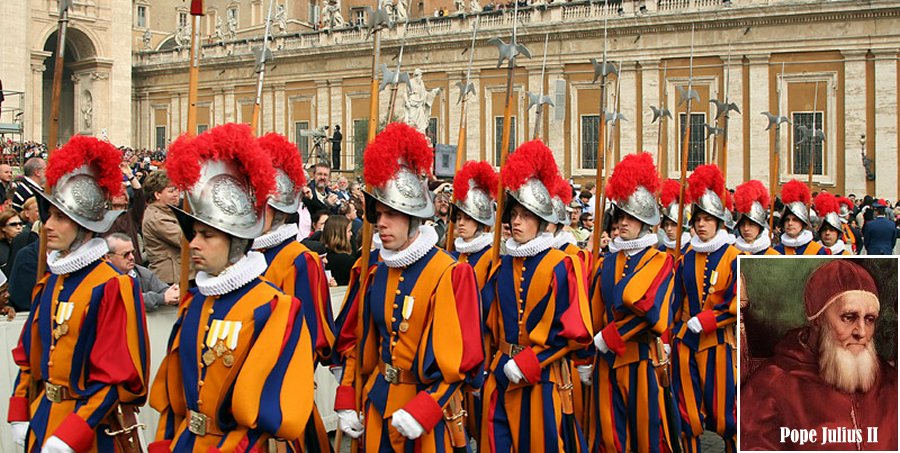 The Swiss Guard is comprised of very well trained men to serve as bodyguards and escorts in European courts since the fifteenth century with Swiss soldiers. They represent regiments of mercenaries to guard the kings of France, Spain, Naples, and families of high European nobility who distrusted his own countrymen.

Indeed, many of poisonings and stabbings in the high courts led to distrust the courtiers servers. Today is the official day of the foundation of the Pontifical Swiss Guard.

For over 500 years, the highly-trained Swiss Guard has been has been at the service of the Popes and has been watching over the Vatican.

The Pope’s choice to hire Swiss mercenaries was no accident.

The Swiss soldiers had a reputation of being invincible thanks to their courage, their noble intentions and their proverbial loyalty. The great Roman historian Tacitus noted many centuries ago:

"The Helvetians are a nation of men of war and its soldiers are well known for their fighting qualities." For this reason, the Swiss cantons, who allied themselves with one country and then again with another, played a significant...

Despite a clumsy uniform, these men are considered among the most elite soldiers in the world.

Each man is a master in hand-to-hand combat, as well as the use of pistols and small arms perfectly hidden beneath the brightly-colored cloth.

As is common with any elite military corps, competition is intense for inclusion in the Swiss Guards. New recruits must be unmarried Roman Catholic males with Swiss citizenship, between 19 and 30 years of age, and at least 5 feet 8 inches (1.74 metres) tall.

They must have a professional diploma or high school degree and must complete basic training with the Swiss military.