Two of the geoglyphs detected by drones. Credit: Yamagata University.

The mysterious drawings, often monumental in scale, are thought to date between 100 B.C.E. and 300 C.E.

These geoglyphs were created by removing black stones from the surface of the earth to expose a white sandy surface below. Current research suggests that there are two types of geoglyphs: a linear type and a relief type. Of the geoglyphs discovered in this study, only five are of the former type, while 163 are of the latter type. Most of the geoglyphs of the latter type are small, less than 10 meters in diameter, and are mostly distributed along ancient trails.

Some of the intriguing geoglyphs. Credit: Yamagata University.

Yamagata University has been engaged in research on the Nasca geoglyphs, a World Heritage Site, and has discovered numerous geoglyphs as well as promoted activities to protect them. This research team has received an official permit from the Peruvian Ministry of Culture to conduct archaeological research on the Nasca Pampa. One hundred and ninety geoglyphs of animals and humans have been discovered between 2004 and 2018. 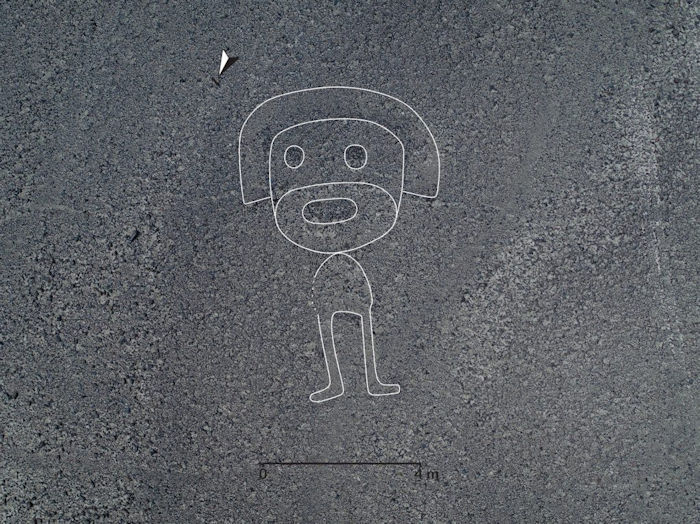 One of the new Nazca geoglyphs. Credit: Yamagata University.

The results of this research will be applied to future AI-based surveys of the distribution of Nasca Geoglyphs and their protection.

By using the newly discovered geoglyphs for AI analysis, Yamagata University aims to clarify the distribution patterns of the geoglyphs. The results of this research will also be used for geoglyph conservation activities.