Jan Bartek - AncientPages.com -  The use of radar has once again resulted in a successful archaeological discovery. This time scientists conducted a laser scan of a region on the Isle of Arran in Scotland and they found something unexpected. Laser images reveal a never-before-seen monument that is estimated to be about 5,000-year-old. 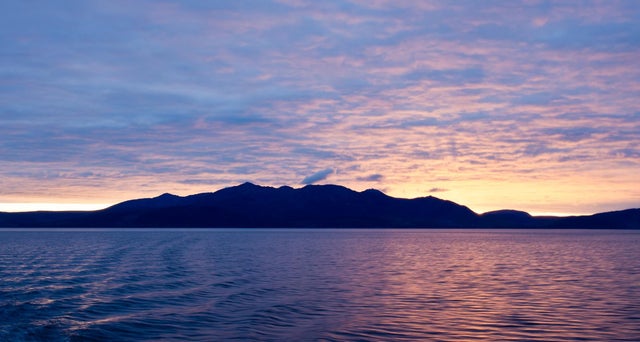 A 5,000-year-old never-before-seen temple has been discovered on the Isle of Arran. Credit: Public Domain

What was this ancient structure? What was it used for? What can the building that is assumed to be a temple tell us about the history of Neolithic history in Scotland? These are some of the many questions occupying archaeologists and historians right now.

Very little information about the structure that is more than a kilometer long is currently available at this moment, but scientists speculate they have found an ancient ritual site that may have been a gathering place for Neolithic people who came from far away to honor their dead.

“Cursus monuments were often defined by long lines of timber posts, forming a long rectangle, and were amongst the most spectacular features in the Neolithic landscape. The posts may have served as a procession route, perhaps to honor the dead. Some were burned to the ground in an almighty display which is believed to have been part of the ceremonies associated with these huge monuments,” the Scotsman reports.

Dave Cowley, Rapid Archaeological Mapping Programme Manager at Historic Environment Scotland, who discovered the site following a laser scan of Arran, described the cursus monument as a “cathedral of the day”.

He said: "I think if you asked the survey team what they thought they were most likely to find on Arran, I would bet you no one would say a Neolithic cursus monument

There is no other on Arran, its unique on the island, there is one more in Kilmartin Glen and that is pretty much it for the western seaboard.

What this example at Tormore tells is there are probably actually many more on them but because they were built from timber, you are not likely to see them in the unimproved peat landscape of the west coast

“Arran has got some cracking Neolithic and Bronze Age archaeology but we are still surprised that this monument is here.

It adds a whole additional dimension to what the archaeology of the Neolithic on Arran can tell us. It is like finding a whole new layer in a box of chocolates of new things.

When you look at the topography, it very slightly runs to the crest of a ridge. They have been very careful how they have positioned this monument. There probably was a superstructure here but we won’t know for sure without excavation. 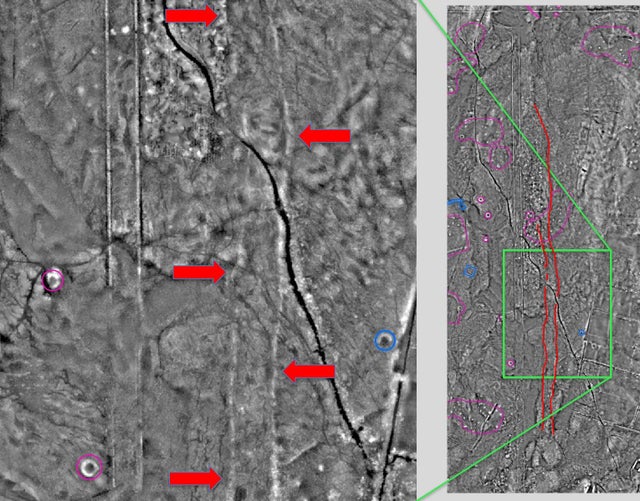 The site of the cursus monument was discovered after these two parallel lines, marked here by red arrows, were picked up by a laser scan of the Arran landscape. Credit: HES/Dave Cowley.

It would have had impact. There is an element of design to it, a form of landscape architecture.

It does seem likely that there were timber elements built into it. Whether or not it was set on fire we just don’t know at the moment.”

The main reason this Neolithic temple has not been spotted before it most likely because it was built from timber and such structures are difficult to discover in the unimproved peat landscape of the west coast.

It’s worth mentioning that more than 1,000 unknown archaeological sites have been found on Arran using Light Detection and Ranging (Lidar) technology, and it wouldn’t be surprising at all if other fascinating ancient sites will be detected in the near future.