The Hamilton Gardens in New Zealand are giving visitors an opportunity to step 4,000 years back in time and explore the sacred plants of the Pharaohs. 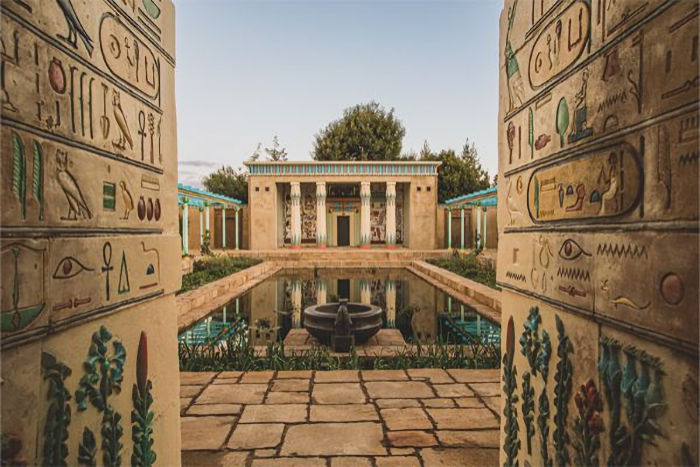 “Archaeologists know a lot about what these ancient gardens looked like, but we believe Hamilton Gardens is the first to recreate an Ancient Egyptian Garden,” Hamilton Gardens Director Lucy Ryan said.

“For ancient Egyptians, life on earth was a preparation for the dangerous journey into the afterlife. Temples and their gardens were a meeting place between heaven, earth, and the underworld.

The Temple Garden at Hamilton Gardens is based on a typical temple from the Middle Kingdom period (2040 BCE to 1782 BCE). Temple gardens produced the floral, vegetable and fruit offerings for these sacred rituals. They grew the plants used in perfumes for anointing statues to the gods and garlands of flowers for religious processions. 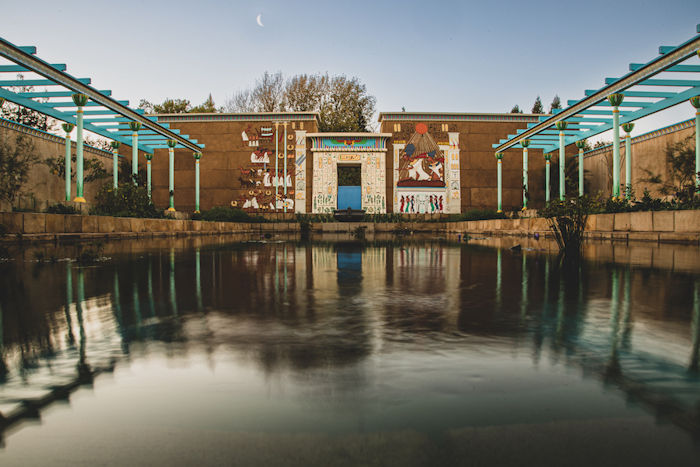 “Temple compounds all shared a similar, highly symbolic design. They were enclosed by high walls. The gardens featured a central, rectangular pool, with pergolas covered in grape vines and rows of trees often linked with irrigation channels,” said Ryan.

The opening of the Ancient Egyptian Garden marks the earliest garden in Hamilton Gardens concept, telling the 4000-year story of gardens and civilizations from 2040BCE to now.

Gardens in ancient Egyptian times were sacred spaces that very few ordinary Egyptians would ever have been allowed to enter. This garden has been chosen to tell the story of how a belief in the afterlife has shaped human culture from the earliest times.

The Ancient Egyptian Garden will form part of the ‘Productive Garden collection’ at the Hamilton Gardens, a collection of productive gardens that each address aspects of the relationship between people and plants.

“The idea is that, from the outside, it looks like a ruin,” Dr. Peter Sergel,​ the man who envisaged and designed the garden told Stuff New Zealand.

“But as you come through the entrance passage, it’s like a time machine, and you’re transported almost 4000 years back into the past to the Middle Kingdom of Egypt.” 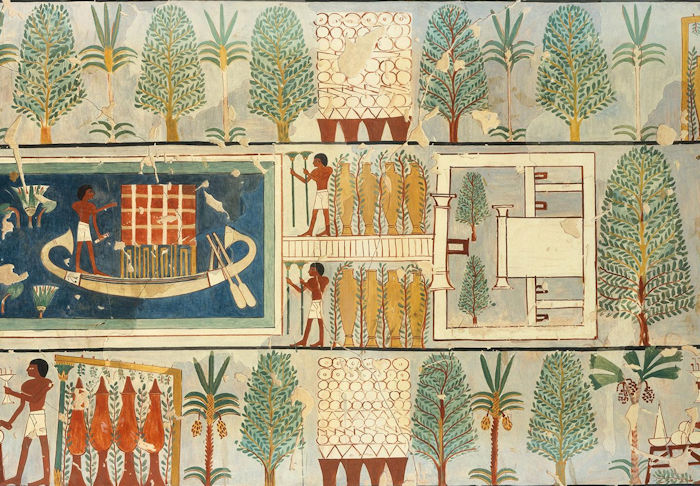 As part of his research, Sergel traveled to Egypt in 2018 and also drew on the expertise of Egyptologists at Oxford University and in New Zealand.

A great deal is known about the ancient temple gardens, from its architecture and coloring, through to the plants found inside.

“We know what colors were used due to research on sealed tombs and chemical analysis, and they really were this bright,” Sergel said. 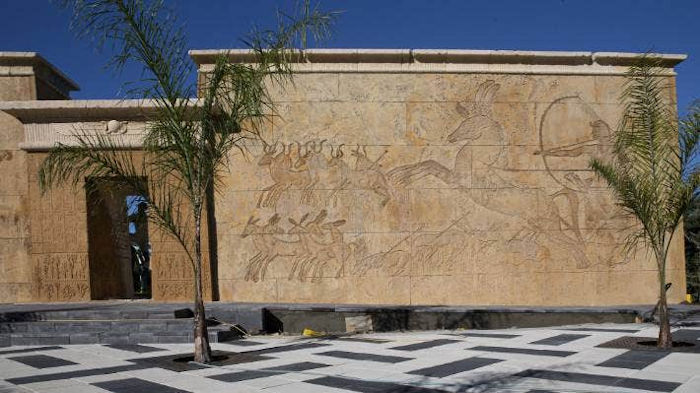 Visitors to the garden enter from the newly created Palm Court which is accessed from the Kitchen Garden.

The exterior walls are adorned with artwork depicting Ramesses II in a “smiting scene” and Ramesses III hunting with a bow and arrow.

“On the outside, the pharaoh was making a statement to the public. But inside, it’s about what the pharaoh wants the gods to know about him,” Sergel said.

“If you analyze this garden, it’s all about the afterlife. It’s a place for spirits and gods.”

The typical elements of an Egyptian temple garden include a rectangular “step pool” bordered by gardens. The temple garden has high walls around the sides and a grand central entrance. Symmetry is important when it comes to the garden's layout and plantings. 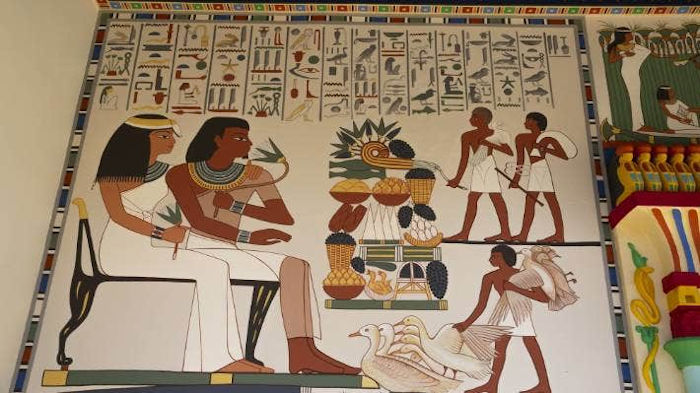 “Our garden is probably a pretty modest garden compared to the ones they had,” Sergel said.

“Some of them were huge. Twenty women could row the pharaoh around in the pool. We know about Egyptians as builders of pyramids and temples and as fantastic artists. But they were also brilliant horticulturalists. Egypt was considered the bread basket of the Roman Empire.”

The temple garden features familiar food crops, such as parsley, onions, and radishes, all of which were used in rituals and offerings. The plantings are measured out in cubits – a measurement from the tip of your longest finger to your elbow. 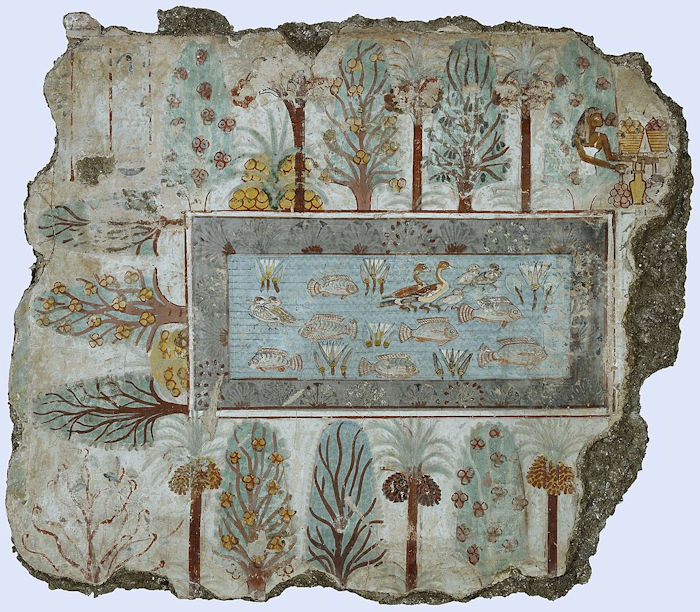 Grape vines will eventually climb up and across the temple garden’s pergolas, offering shade in the warmer months. Plantings behind the pergolas include fig, olive, and almond trees and date palms.

The Ancient Egyptian Garden is the 18th of 30 themed gardens to be completed.

“Hamilton Gardens tells the story of humankind and this garden reflects one of the first big steps in civilization, a belief system bringing communities together,” Sergel said.

“Each of the 30 steps in civilization resulted in a completely different form of garden. Gardens are shaped by belief systems, technology, politics and lifestyles.”

Southgate said it could take another decade to complete the remaining 12 gardens, but steady progress is being made.