Conny Waters - AncientPages.com - Neo-Assyrian examples have been rare which is why this discovery is so significant and offers much to investigate. Some years ago, looters broke into a subterranean complex by creating an opening on the ground floor of a two-story home in the village of Başbük, Turkey. When the thieves were caught by authorities, a team of archaeologists did an abbreviated rescue excavation to study the significance of the underground complex and the art on the rock panel. 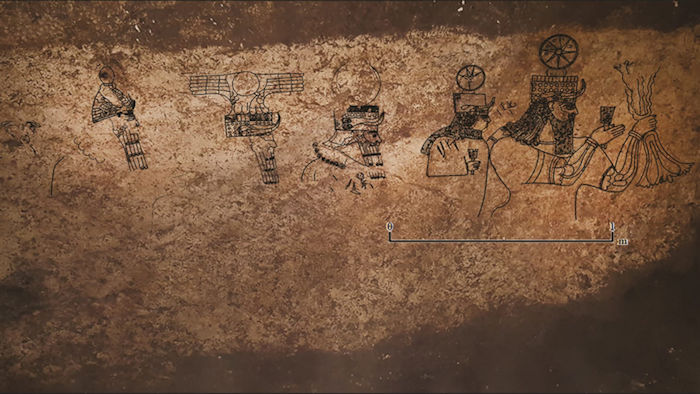 The results of this study have now been published in the journal Antiquity.

Scientists say the rare artwork on the wall was created in the 9th century BC during the Neo-Assyrian Empire, which began in Mesopotamia and expanded to become the largest superpower at the time.

This expansion included Anatolia, a large peninsula in Western Asia that includes much of modern-day Turkey, between 600 and 900 BC.

"When the Assyrian Empire exercised political power in south-eastern Anatolia, Assyrian governors expressed their power through art in Assyrian courtly style," said study author Selim Ferruh Adali, associate professor of history at the Social Sciences University of Ankara in Turkey, in a statement.

The Rock Panel At Basbük

The intriguing rock panel is carved in an Assyrianised style and depicts eight members of the Aramean pantheon in procession. Aramaic inscriptions accompany the three figures on the right-hand side. 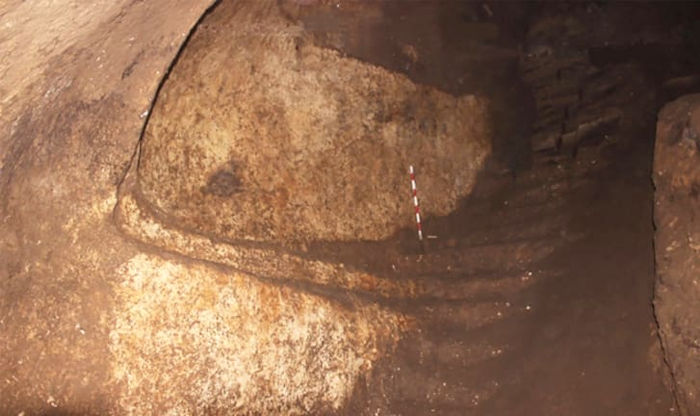 Archaeologists followed a long stone staircase to an underground chamber, where they found rare artwork on the wall. Credit: C. Uludağ

The Basbük divine procession “scene begins with the leading male deity, Adad (or Hadad) depicted in the ‘storm-god’ tradition of northern Syrian and south-eastern Anatolian iconography—recognizable from his triple lightning fork and circled star. He is emphasized in the scene by being shown at a larger scale than the other figures. The lightning fork, bracelet and double-horned cylindrical headgear with short vertical lines resemble the depiction of Adad on the Arslantas Stela of Tiglath-pileser III and the Turlu stela at Nizip/Gaziantep.” 1

Adad “was considered a good giver but sometimes demonstrated his destructive powers. He could guarantee rain, annual spills, good crops, and wealth. The vegetation of plants (and thus of fertility and wealth) depended on him on this mighty god.

It happened that people behaved badly, so Adad was instructed by Enlil to withhold his beneficial rain and cause drought on Earth. However, the trickster Enki, the god of water, crafts, intelligence, and creation), who had many disagreements with his brother Enlil, wanted to do it against his will.” 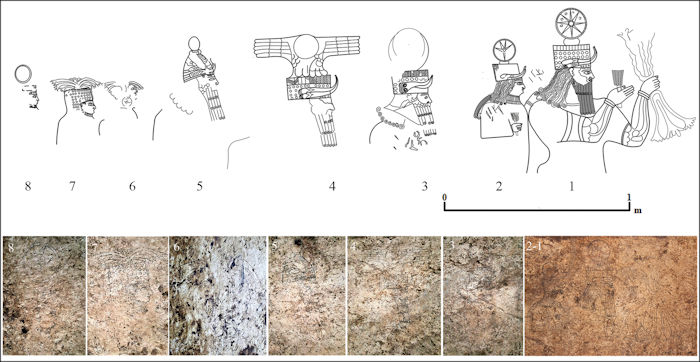 On the rock panel, there is also a depiction of a goddess similar to Ishtar whose headgear is crowned by a crescent and full moon. “The crescent suggests this is the moon god Sin of Harran, whose cult was recognized throughout northern Syria and south-eastern Anatolia.”2

Next to Moon god Sin there is another figure scientists say depicts the Sun God Shamash.

“He was associated with truth, justice, and healing and was one of the most active gods in the pantheons of ancient Sumer, Babylonia, and Assyria. In Sumer, he was worshipped as god Utu.” 3

” The remaining four deities cannot be clearly identified. One wears double-horned and conical headgear crowned with a circle, recalling that of the deity Karhuha depicted at Karkemish and Zincirli, where he is identified by his shield and spear. The deity at Basbük does not carry these accouterments and remains unidentified. Behind him, the heads of two female figures are visible. On the first, two tresses of hair fall to the front and back of the head. A circular object (the outline of a necklace?) appears on the right shoulder.

A second female head is shown along with the outline of her back. Three long tresses fall to the front and back of her headdress, reaching the nape of her neck. The polos is an extension of her garment. The ensemble resembles depictions of the goddess Kubaba and her priestesses on orthostats from Karkemish,” the researchers write in their study.

Unlike many ancient rock carvings, this particular panel is unique because it shows the integration of cultures instead of conquests. 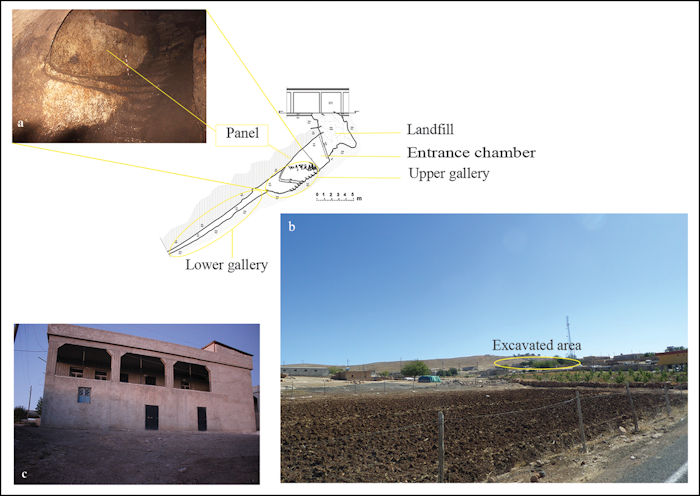 a) The 2018 vertical ground plan of the subterranean Başbük complex (plan by Cevher Mimarlık, based on laser scanning; photograph by C. Uludağ); b) view of Başbük from the west; c) two-storey house above the excavated area at Başbük (photographs B–C by M. Önal).

The deities have their names written in the local Aramaic language. The imagery depicts religious themes from Syria and Anatolia and was created in the Assyrian style.

"It shows how in the early phase of Neo-Assyrian control of the region there was a local cohabitation and symbiosis of the Assyrians and the Arameans in a region," Adali said. "The Başbük panel gives scholars studying the nature of empires a striking example of how regional traditions can remain vocal and vital in the exercise of imperial power expressed through monumental art."

"The inclusion of Syro-Anatolian religious themes (illustrates) an adaptation of Neo-Assyrian elements in ways that one did not expect from earlier finds," Adali said. "They reflect an earlier phase of Assyrian presence in the region when local elements were more emphasized."

Upon discovering this artwork, study author Mehmet Önal, a professor of archaeology at Harran University in Turkey, said, "As the dim light of the lamp revealed the deities, I trembled with awe as I realized I was confronted with the very expressive eyes and majestic face of the storm god Hadad."

Rock Panel With A Mystery

As reported by CNN, “the team also identified an inscription that may show the name of Mukīn-abūa, a Neo-Assyrian official who served during the reign of Adad-nirari III between 783 and 811 BC. The archaeologists suspect that he had been assigned to this region at the time and was using the complex as a way to win over the appeal of the local population.

But the structure is incomplete and has remained unfinished for all this time, suggesting that something caused the builders and artists to abandon it -- perhaps even a revolt.

Adali was the epigraphist of the team who read and translated the Aramaic inscriptions in 2019 using photos captured by the research team, who had to work quickly to study the site.

"I was shocked to see Aramaic inscriptions on such artwork, and a sense of great excitement overtook me as I read the names of the deities," Adali said.

The site was closed after the 2018 excavations because it is unstable and could collapse. It is now under the legal protection of Turkey's Ministry of Culture and Tourism. The archaeologists are eager to continue their work when excavations can safely resume and capture new images of the artwork and inscriptions and possibly uncover more artwork and artifacts.” 4