A. Sutherland - AncientPages.com - Pyramids and temples of the ancient world were precisely aligned with the direction of the rising or setting sun, moon, star, or planet on an important day of the year.

Some of them were lined up with the cardinal points but most were aligned to other astronomically significant directions. 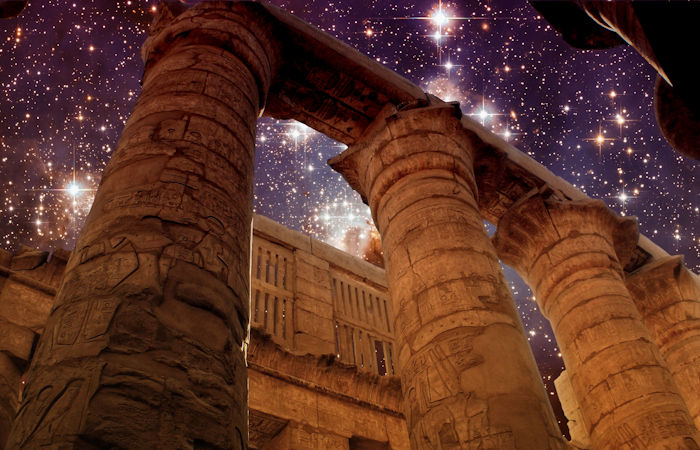 No matter place in the world, whether it was an underground ceremonial chamber of the Anasazi, prehistoric Indians of the American Southwest, or a temple of New Kingdom of Egypt or a sacred platform in ancient Mexico, ancient temples had an important, astronomical purpose - they linked to the sky. Astronomy has always played an important - cultural - role in temple orientation in many ancient cultures. The Chacoans, for example, were expert skywatchers with a clear knowledge of the cyclic and seasonal patterns of the sun, moon, and stars.

"One who professes himself as an architect should be acquainted with astronomy and the theory of the heavens," said once Roman architect Marcus Vitruvius Pollio (ca. 75-15 BC).

"From astronomy, we find the east, west, south, and north, as well as the theory of the heavens, the Equinox, Solstice, and courses of the Stars."

Dendera temple, a beautiful ceiling depicting a huge figure of the sky goddess Nut showing the birth cycle of the sun whose rays are shining down on Hathor. 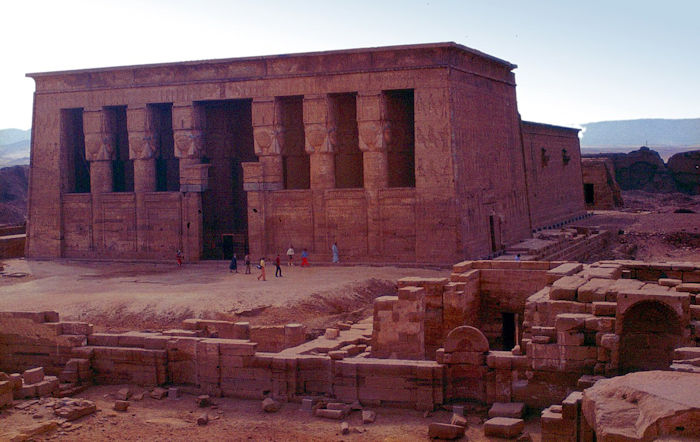 Astronomical alignments of the ancients emphasized cosmic themes - the rhythm of life, death, and rebirth, and the temples, sanctuaries, ziggurats restated the theme of cosmic order in terms of its builder's own view of the universe.

However, not all Egyptian temples were astronomically aligned in accordance with their meaning and their use.
The walls and ceilings of the Temple of Hathor at Dendera, for example, are covered with astronomical images and depictions that focus on heaven. The temple's main axis was oriented approximately 18.5 degrees east of north, and according to some scholars, Dendera's axis may have been pointed at a star Dubhe in the Big Dipper or Eltanin in Draco (the Dragon).

The orientation of the ziggurat (a pyramid that rose sky-high in usually seven stages) was such that the corners of the structures pointed to the four cardinal points of the compass so that the sides of the structure faced to the northeast, southwest, northwest, and southeast.

For them, a temple is a loom on which the sun weaves the cyclic pattern of time, transforming its structure into organized space. According to Kogi, cosmic order originates in the pattern of the sun's movement.

Thanks to the accurate satellite imagery, maps of the past positions of stars, and ground surveys, it was now possible to learn more about different astronomical targets and the role of astronomical knowledge in the doomed Roman city of Pompeii.

He found evidence that at least nine of these temples were aligned with the rising of particular stars or with the position of the sun or moon on days of cultural significance.

Most of the temples were linked to celestial objects important in Greek, Roman, and Egyptian mythology. However, two Greek temples in Pompeii - those for Apollo and Venus - appear to be aligned with a relatively obscure star called Phact, which has no known importance in Graeco-Roman myth.

The Mayans tracked and studied Venus in the observatory. Venus was not only a heavenly body but also an astro0nomical measuring point. At Chichén Itza, there are two platforms of the planet Venus. 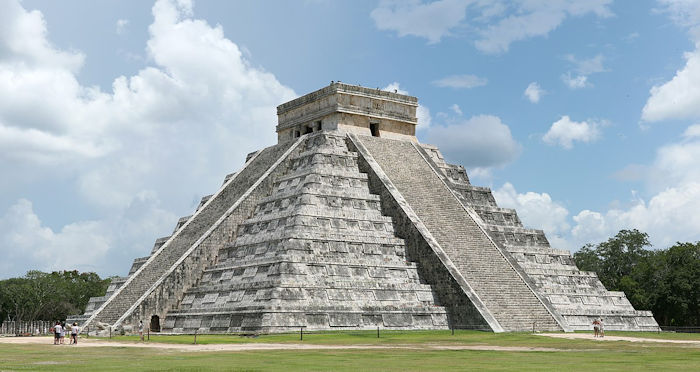 However, Tiede has uncovered previous work that shows alignments of Phact with at least 12 temples in Thebes for Amun, the Egyptian god of wind Amun came to be identified with the solar god Ra and the god of fertility and creation Min so that Amun-Ra had the main characteristic of a solar god, creator god and fertility god. He also adopted the aspect of the ram from the Nubian solar god, besides numerous other titles and aspects.

The star Phact is a blue main-sequence star in the constellation Columba. At 261 light-years away, it is the 106th brightest star in the Earth's sky.

Today we design the universe in another way; our observational approach to the sky differs from that of our ancestors. However, we all do it for the same reason - to better understand the universe and its complexity.