A. Sutherland - AncientPages.com - In ancient Egyptian religion, Ra (Re) was the god of the sun and creation, who was born each morning in the East and died each night in the West.

In the night, he traveled through the underworld, full of more terrible monsters. One of them was a deadly and evil serpent Apophis whom Ra had to defeat to reappear the next morning on the eastern horizon.

By the 4th Dynasty (c. 2575BC. 2465 BC ), Ra had taken his leading position. His identity was later combined with many other gods. It resulted in the appearance of other names like a falcon-headed Ra-Horakhty originated through association with Horus, Atum-Ra, Sebek-Re, Khnum-Re, and Amon-Ra that by the late 11th Dynasty (c. 1980), was the principal god of the pantheon and the patron of kings for more than a thousand years.

While during the Amarna period (1353–1336), the very controversial Amenhotep IV (c. 1379-1362), known as Akhenaten ("servant of the Aton"), significantly minimized the role of Ra due to the worship of the sun disk Aton, which he introduced in his new capital was Amarna.

During the New Kingdom, a significant relationship appeared between the god Ra and Osiris, the ruler of the underworld. The Egyptians believed Osiris and Ra represented "the body and soul, respectively, of a single great god. The solar cycle was thus imagined as the 'ba' of Ra descending into the underworld to unite with Osiris as his own corpse. Nevertheless, Osiris and Ra maintained  independent characteristics, identities, and the realms." 1

Ra was displayed in many different forms. One was the disk of the sun, usually encircled by a protective cobra and given outstretched wings, or without them, before the Amarna Period. Instead, Ra was depicted as a man with the head of a falcon, a scarab, a ram, or could also represent a serpent, a cat, and a phoenix. He was also frequently mentioned in certain spells and represented in popular amulets made to be worn daily as a symbol of Ra veneration or when he accompanied the deceased in the funeral ceremony.

To ancient Egyptians, he was the sun that gives warmth, life, and growth, in the same way as the Hindu sun god Surya or Shamash, the god of the Sun in Mesopotamian beliefs, or Apollo (Phoebus, the 'Shining-One'), initially, the god Helios' revered by the Greeks.

During the third and fourth dynasties, Ra reigned like a human pharaoh, and Egypt enjoyed a golden age of economic prosperity and peace without threats. Ra held the whole world in his hands, thanks to the magical power he possessed. His influence as the 'King of the Gods' spread from his cult center in Heliopolis, and all subsequent rulers of Egypt were considered earthly incarnations or 'sons of Ra.' 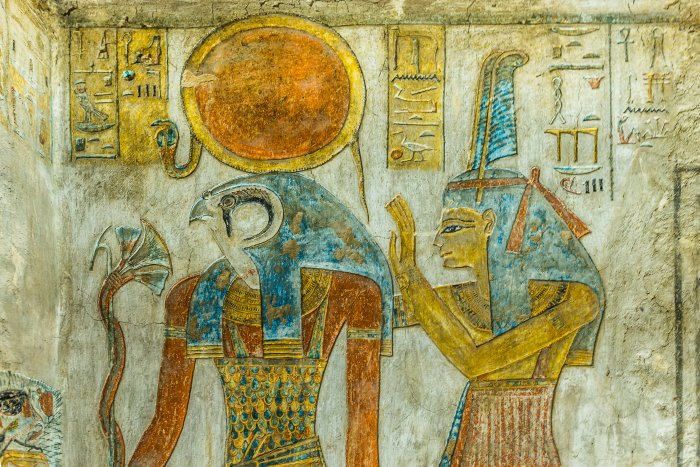 Ra was to bring immortality to the entire state through Pharaoh, his son. The sun seemed to be immortal to the Egyptians (and many other ancient people). It "died" every evening, wandered underground, and then was "reborn" every morning.

The sun was also crucial for the success of agriculture in the Nile region. Thus, since the Pharaoh was accepted as the sun god, Egypt was prosperous and blessed.

Significance Of Ra Myth And Unification Of Egypt

The cult of Ra began to form in parallel with the unification of Egypt (about 2686 BC). The pharaohs of the Fourth Dynasty, who built the pyramids, gave Ra the status of a state religion. The first three rulers even had a name that included the word "Ra" (Djedefra, Khafra, Menkaura).

However, the priesthood of Ra achieved its prestigious position first under the pharaohs of the 5th Dynasty (2494-2345). The Westcar Papyrus, an ancient Egyptian text containing stories of miracles performed by priests and magicians, mentions a prophecy given by the goddess Meskhenet regarding the birth of the three future kings Userkaf ("his soul is powerful"), Sahure ("He who is close to Re"), and Neferirkare Kakai (Beautiful is the Soul of Re), who would become rulers of Egypt.

The prophecy announced the beginnings of the Fifth Dynasty, and all of these three kings were entitled the 'sons of Ra.' It is worth mentioning that the fifth Dynasty was established not without the help of influential priests from Heliopolis.

During the Ancient Kingdom, the sun god Ra was the main god. Ra was to bring immortality to the entire state through Pharaoh, his son. The sun - necessary for the success of agriculture - seemed to be immortal to the Egyptians, and so was it to many other ancient cultures.

It "died" every evening, wandered underground, and was "reborn" every morning. Since the Pharaoh was like the sun god, the land could receive blessings and a long time of prosperity.

However, when Ra grew old and his bones turned to gold, his wise great-granddaughter Isis tricked him out of this name, the consequence of which was the people's disobedience.

Seeing the people's attitude, Ra decided to punish them by sending his "Eye of Ra" in the form of the goddess Hathor, who made a terrible beating: people began to drown in their blood. Ra was horrified by the pogrom and, taking pity, saved the survivors the next day by getting Hathor drunk.

Nevertheless, the people's ingratitude still upset Ra, and he decided to leave them for heaven on the back of the sky goddess Nut, who took the form of a cow. The people repented and came to see off Ra, expressing their willingness to fight against the enemies of Ra and establishing sacrifices and a cult in his honor.

But even when he retired to heaven, Ra did not cease to do well to the earth. Therefore, Egyptian myths explained the movement of the sun across the sky in this way: Ra, accompanied by other deities, leaves the East every day in a day barge to illuminate the earth, and after twelve hours, he continues his job to illuminate the afterlife for twelve night hours.