A. Sutherland - AncientPages.com - Khepri is one of the important deities of Egyptian mythology. Khepri was the god of creation, the movement of the sun, life, and resurrection.

His name Khepri is also spelled as Khepera, Khepra Kheper, and Chepri, which literally means "He Who is Coming into Being". 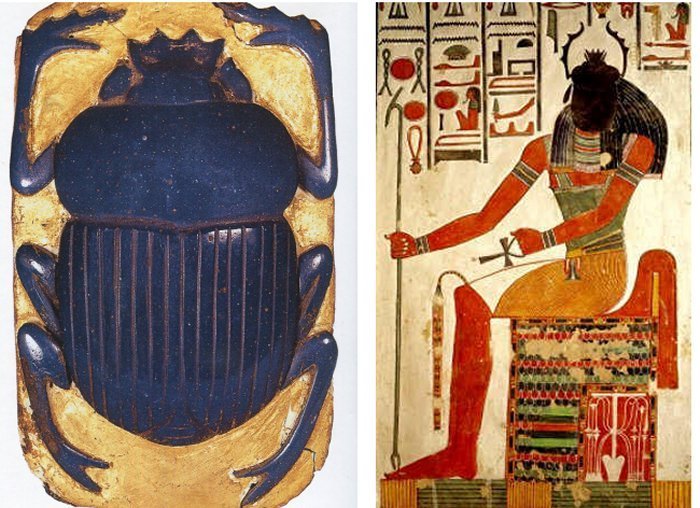 The root word of 'Khepri' also means "to create" or "to transform" and also "scarab beetle".

Khepri - the self-existent creator god - was associated with the scarab or dung beetle due to the scarab’s habit of rolling a ball of mud or dung along the ground. Observing the insect’s behavior, the Egyptians interpreted it as being similar to the ball of the moving across the sky daily.

Khepri was the god of the first sunrise at the dawn of the creation and sometimes, he also symbolized the sun in general, which means he was linked with the solar god Ra.

Secrets Of The Scarab – Ancient Sacred Symbol In Human History

However, his main mythological role was that of the rising sun from the horizon.

In the texts of the Book of the Dead, Khepri appeared in reference to the symbolism of the resurrection as a divine being who possessed a secret power of constant rebirth.

Veneration Of Scarab Goes Back Thousands Of Years

Some Egyptologists believe that Khephri was among the most ancient deities of Egypt. His depictions were found in most of the Egyptian temples and he was worshiped as one of the aspects of the Egyptian sun god, Ra.

It is also widely known that worship of a deity in the form of a scarab goes back to the Paleolithic epoch (10,000 to 20,000 years ago). Thus, it long predates veneration of Khepri in Egypt.

Religion And Appearance Of Khepri

The ancient Egyptians believed that Khepri created himself and they associated him with rebirth, renewal, and resurrection. 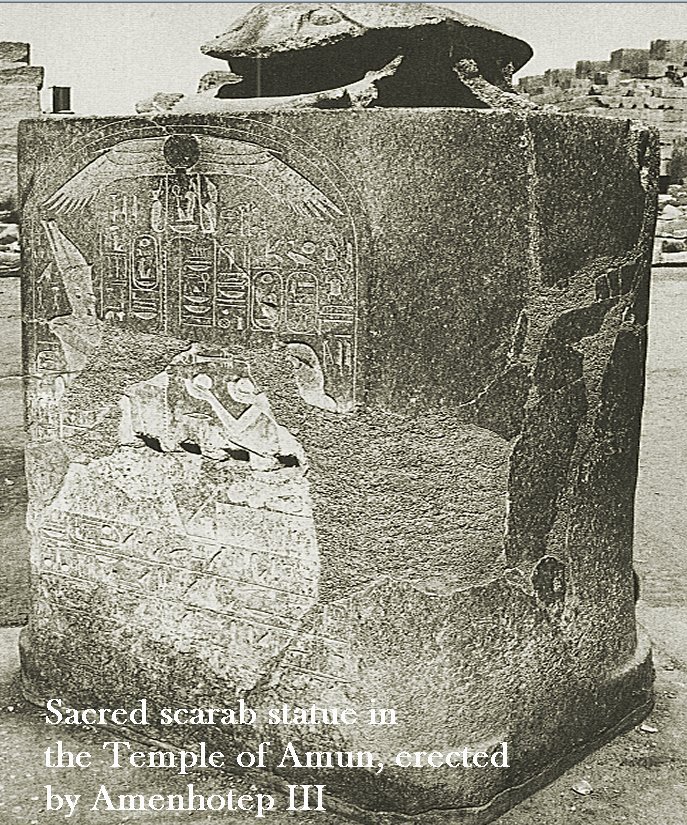 Sacred scarab statue in the Temple of Amun, erected by Amenhotep III and dedicated to the sun god Atum-Kheperre, New Kingdom

There was no official cult devoted to Khepri but based on his numerous depictions, he was highly honored in ancient Egypt.

Khepri was mainly portrayed as a scarab beetle, though in some tomb paintings and funerary papyri, he was identified as a human male with the head of a scarab or as a man wearing a scarab (or dung beetle) as a crown. Sometimes, he was wearing a crown more frequently associated with Osiris.

In paintings of the scarab, the ancient Egyptian artists usually used the scarab’s blue or lapis lazuli to emphasize the beetle’s connection to the blue sky, though, in paintings of funerary scenes, this insect was shown black.

The scarab amulets used by the Egyptians as jewelry and as seals were formed in his scarab-like image. People believed in Khepri’s strong power of protection and blessings coming through these objects.

Therefore, the scarab amulets that symbolized good health and longevity were frequently unearthed in ancient Egyptian temples and houses of the living. If scarabs were placed under the coffin, it was believed that no magical or spiritual force could harm the deceased.

Medallions with scarabs were then put into the tombs of the pharaohs to speed their resurrection by the side of Osiris. 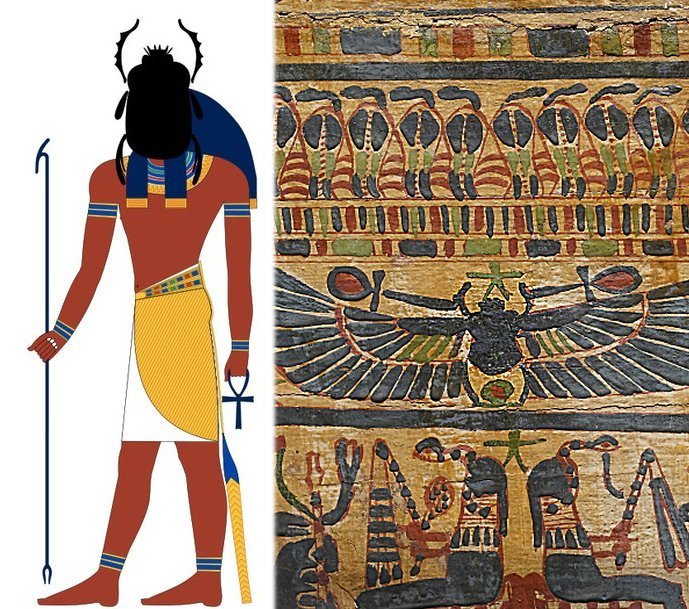 In the Complete Gods and Goddesses of Ancient Egypt, Richard H. Wilkinson writes that “it has been suggested that the underground tunnels of the insect take the same form as he vertical shaft and horizontal passage found in Old Kingdom mastaba tombs and that the pupae of the insect [scarab] resemble the bandaged mummy of the deceased…”

However, Wilkinson writes “there is no indication that the Egyptians themselves recognized such similarities, for these types of embellishments to the lore of the scarab were recorded by Classical writers such as Plutarch…”