Ellen Lloyd - AncientPages.com - Alulim is a mysterious being in Mesopotamian mythology. Just like the Babylonian god Oannes, he is described as a mermaid-deity. It is said that Alulim was half-man and half fish and he ruled for 28,000 years! 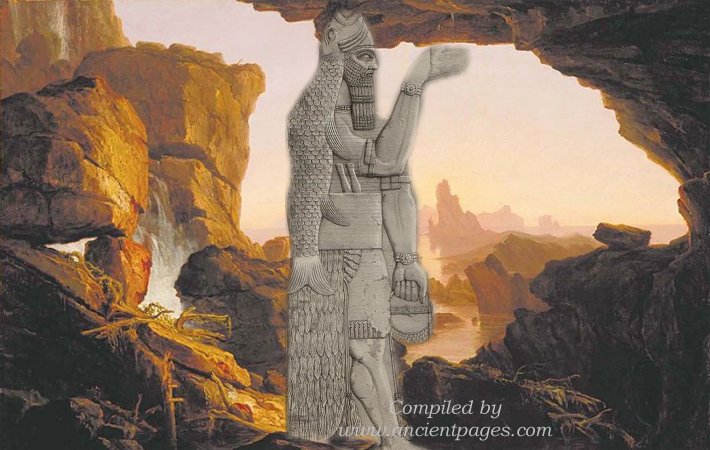 Information about Alulim comes from the Sumerian King List where it is written that when Kingship was lowered from heaven, the gods established five Antediluvian Cities of the Gods, assigning to each ruler lengths of the reign that baffle scientists.

As mentioned earlier on Ancient Pages, the Sumerian King List was produced at the end of the third millennium B.C, most probably during the reign of the third dynasty of Ur. From this valuable and interesting document, discovered in the temple library of Nippur, ancient city of Mesopotamia, we learn that one of the earliest and most sacred cities of the Sumerians – Eridu (E.RI.DU – ‘Home in the Faraway Built’) was the seat of the kingship.

Enki was the creator and protector of humans. He was a skilled craftsman as well as a brilliant scientist, geneticist, and engineer.  Alulim became the ruler of Eridu.

“After the kingship descended from heaven, the kingship was in Eridug (Eridu). In Eridug, Alulim became king; he ruled for 28,800 years.” (Sumerian King List)

Stone tablet inscribed with the Sumerian King List..The clay tablet that survived was dated by the scribe who wrote it in the reign of King Utukhegal of Erech (Uruk), which places it around 2125 BC. Utukhegal was one of the first native kings of Sumer after centuries of Akkadian and Gutian dominance. Photo: Ashmolean Museum

As Zecharia Sitchin wrote in his book, There Were Giants Upon the Earth, “it is also important to remember that the various lists of reigns in the initial Cities of the Gods are lists of their successive “chief officers” and not the names of the gods to whom those cities were granted as ‘cult centers’. 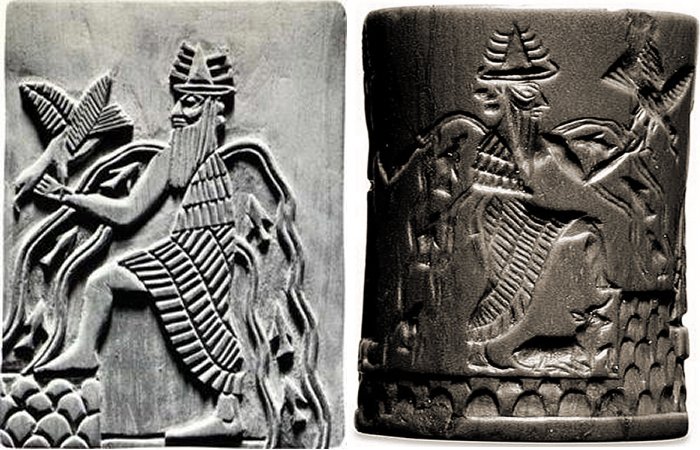 Image of the Sumerian god Enki. A modern reproduction of a detail of the Adda seal (c. 2300 BC). Image via Wikipedia

All the lists agree that Alulim and Alalgar were the first rulers in the first city, Eridu; but as is clearly stated in tablet CBS-10673, Eridu was forever granted to Nudimmud—an epithet of Ea/Enki that meant ‘He Who Fashions Artifacts’; it remained his ‘cult center’ forever, no matter who was the Chief Administrator (“king”) there. (Likewise, Sippar forever remained the ‘cult center’ of the god Utu, better known by his Akkadian name Shamash; Shuruppak was always linked to the Sud—‘Medic’ Ninharsag; and so on. “

Due to the lack of ancient records, it is very difficult to unravel the mystery of Alulim. Who was this enigmatic being and what role did he play in the Near East? These questions are troublesome to answer, but scholars have put forward certain intriguing theories worthy of further attention.

Professor William Wolfgang Hallo of Yale University stated that Alulim was one of the seven demigods known as Apkallu. These beings were created by the god Enki, and their duty was to establish a culture and give civilization to mankind. They served as priests of Enki and as advisors or sages to the earliest kings of Sumer before the flood. The Apkallu were fish-like men who emerged from the water Abzu, the primeval sea below the void space of the underworld (Kur) and the earth (Ma) above.

Interestingly, these seven sages are not only encountered in Sumerian and Babylonian myths, but there are also references to these seven wise men in the myths and legends of Egypt, China, ancient Greece, and India.

The seven sages were obviously very important to our ancestors and records of their existence have been preserved.

Due to their similar appearance, Professor Halo suggests that Alulim and Oannes, who emerged from the sea in ancient Babylonia to enlighten the people were the same beings. He also claims that Alulim's name means "stag".

Professor William H. Shea from Andrews University has elaborated on his theory proposing that Alulim was Biblical Adam.

Can The Adapa Epic Shed Light On The Connection Between Alulim And Biblical Adam? 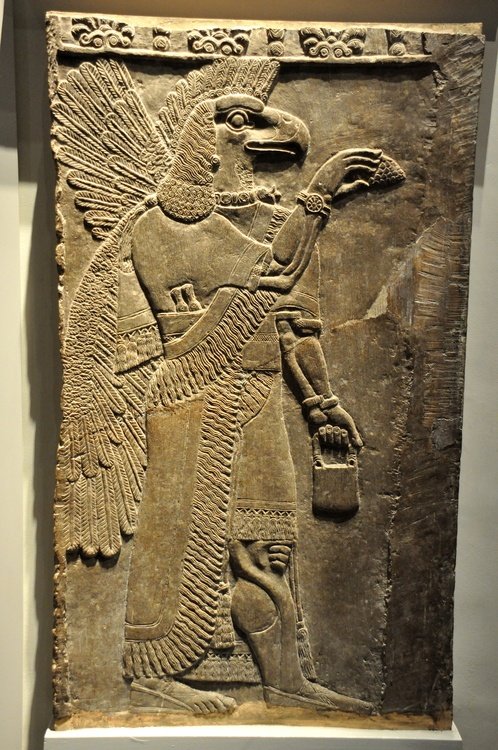 Apkallu from the Temple of Ninurta. This gypsum wall relief depicts an eagle-headed and winged man; this is a protective spirit or Apkallu. Credit: Osama Shukir Muhammed Amin/The British Museum, London

Determined to find a connection between Alulim and Biblical Adam, Professor Shea examined the parallels between the Adapa epic and Genesis.

According to Professor Shea, “the principal parallels between the Adapa epic and the account of Adam's actions in Genesis are readily apparent. They are threefold in nature: (1) Both subjects underwent a test before the deity, and the test was based upon something they were to consume. (2) Both failed the test and thereby forfeited their opportunity for immortality. (3) As a result of their failure, certain consequences passed upon mankind.”

Professor Shea pointed out that though the epic of Adapa and Genesis are similar, there are also differences between these two stories. “For example, the commodities for consumption in the two tests are different. Adapa was tested with bread and water while Adam and Eve were tested with the fruit of the tree of the knowledge of good and evil.”

Nevertheless, his study raises an important question – could Genesis have been based on the Adapa epic? Was Adapa, the Mesopotamian mythical figure who unknowingly refused the gift of immortality actually Biblical Adam?

William W. Hallo - The Ancient Near East: A History

Zecharia Sitchin - There Were Giants Upon the Earth