A. Sutherland  - AncientPages.com - In Norse myths and legends, Gefjon (Gefion) was the Aesir goddess of fertility, plow, and agriculture. She also possessed extraordinary mental abilities and just like Frigg, she knew the secrets of human fates. 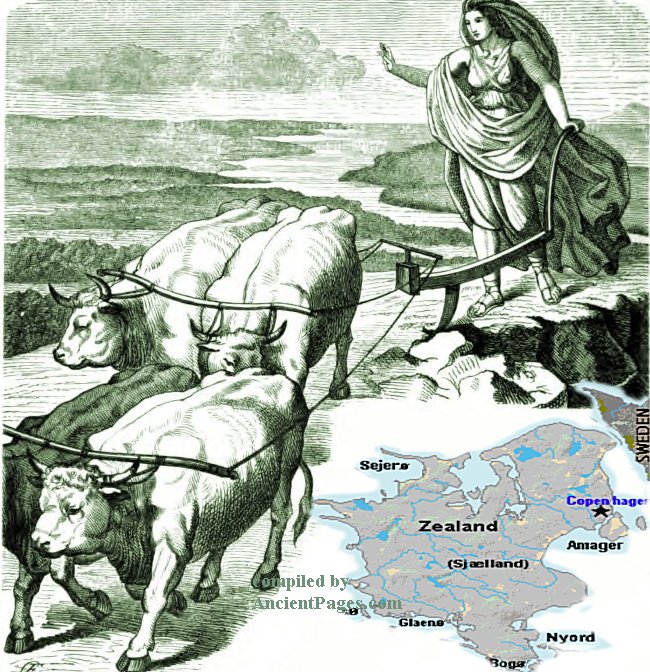 According to the Prose Edda, she was one of the maidens in the palace of Frigga (Frigg) ("the beloved"), who in Nordic mythology, was the queen of the gods, Asgard's mistress, the wife of Odin , mother of Balder, and stepmother of Hermod, Vidar and Höder.

Gefjon, a beautiful goddess of the Æsir, had many maidservants; all maidens who died unwedded were entrusted to her. According to some authors, Gefjon did not remain a virgin forever but married one of the giants, and she had four sons with him. It happened when Gefjon lived in Jotunheim, the country of legendary giants, located in the very north of Europe.

Today, this region is known as the land of the Sami people.

Gefjon Disguised As A Beggar Tricked The King Of Sweden

In 'Gylfaginning' by Snorri Sturluson, there is a story about Gefjon who disguised herself as a beggar. Tradition has it that Odin who dwelled on the island Odense, sent Gefjon to visit Gylfi, King of Sweden, and to beg him for some land which she might call her own. 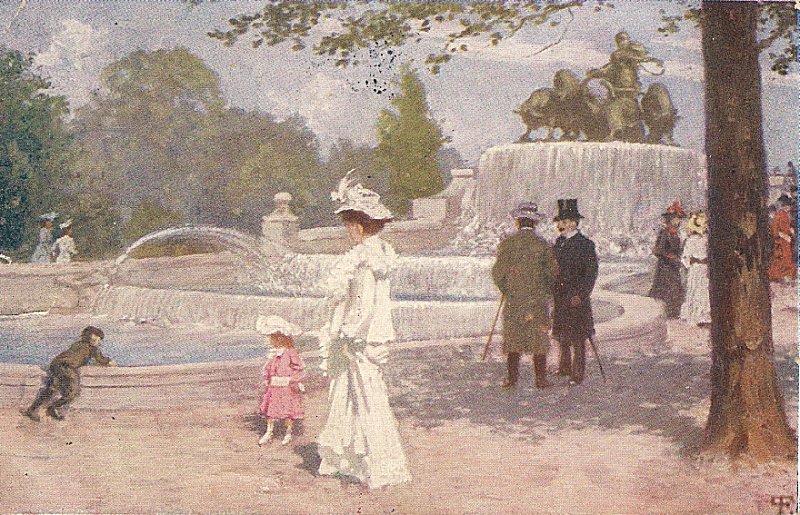 Amused at her unusual request, the king promised her as much land as she could plow around in one day and night. He did not believe that she could take much land during such a short time, but he was wrong.

In this story, Gefjon was not only a beggar but also an old woman. She needed as much help as she could get, so she went up in the mountains and transformed her sons into oxen. They worked very hard plowing up a large part of Gylfe's kingdom. The plow that took place in the western - flat and fertile part of Sweden - went deep into the ground and cut out a huge part of the Swedish territory.

Njord: Norse God Of The Seas And Seafarers And His Unhappy Marriage To Skadi

When she and her oxen were ready, they dragged this enormous piece of land down into the sea where the goddess Gefjon formed a wonderful fertile island that belongs to Denmark. Gefjon gave it a name: Sjælland (Zealand).

There, Gefjon made her home and married Odin's son Skjold (Skiold or Scyld) with whom she lived in the city of Hleidra (or Lethra). She is considered the ancestress of the royal Danish race of Skioldungs. It is said that a noble line of kings and skilled warriors descended from them.

The excavated area created a "hole" in the Swedish soil, which was quickly filled with water, forming a large lake, at first called Logrum (the sea), but was later known as Mälaren (some versions refer to Lake Vänern, located in the southwest of Sweden).

One of them tells that Gefjon loved to wander the world, and once she was invited to visit the king Gylfi in the country of Sweden, who wanted to meet the beautiful Gefjon. Together with king Gylfi, she spent a pleasant time. 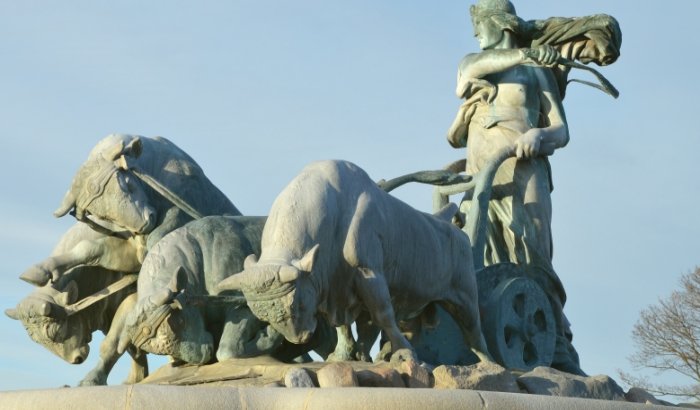 The Gefion Fountain (Gefionspringvandet), located in Langelinje Park, Copenhagen, Denmark. The large stones symbolize the land plowed by the goddess Gefjon and her four oxen. source

Then, he wanted to royally thank her, so he said that he would give her as much land as she would plow in one day and one night. As a matter of fact, Gylfi did not believe Gefjon would be able to get much land during such a short time of plowing.

As we learned, the clever goddess Gefjon surprised him.

Usually, Loki either assists the gods or behaves in a very bad manner towards them. His bad side is clearly seen in the poem 'Lokasenna' (Old Norse "Loki's Quarrel"), an Old West Nordic poem in the Poetic Edda recorded in Codex Regius. The poem presents an exchange of insults between the gods and Loki.

Loki, amongst other things, accuses the gods of moralistic sexual impropriety, the practice of sorcery, and prejudice.

In 'Lokasenna' Loki once again shows his true nature but this time, he is involved in the exchange of insults addressed to the goddess Gefjon.

Odin at once warns Loki to beware of Gefjon's wrath "for she knows the destinies of men as well as I."

The story of Gefjon, and the clever way in which she procured land from Gylfi to form her kingdom of Seeland (Zealand) is much like the Greek story of Dido, who obtained by stratagem the land upon which she founded her city of Carthage.

Dido asked Iarbus, the Berber ruler if she could buy some piece of land in order to settle and start a new life with her people.

In both accounts, oxen play an important role, for while in the Northern myth these sturdy animals draw the piece of land far out to sea, in the other, Dido a very intelligent woman instructed her people to cut the skin of the animal into very thin strips. Then, her people covered the piece of land with the strips and thus they marked its borders.