Ellen Lloyd - AncientPages.com - There is a special and important reason it is not allowed to stay in Nidvidan after sunset. It is said that even the animals leave this mysterious place when darkness falls.

Nidhivan is a sacred place located in a dense forest in the historical city of Vrindavan in the Mathura district, Uttar Pradesh, India. 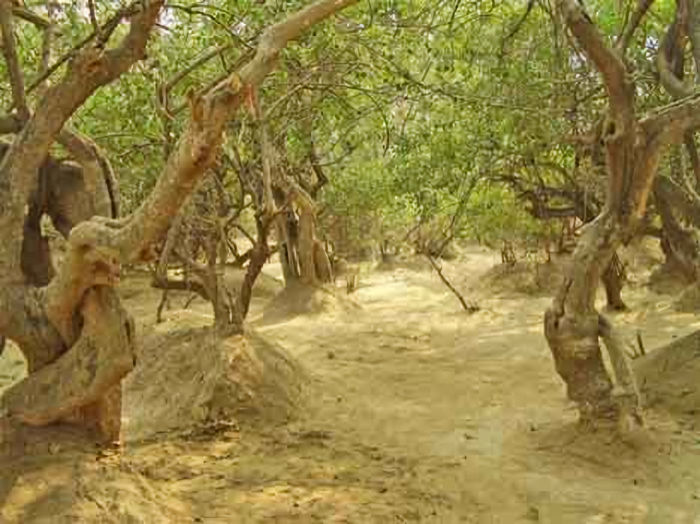 Spread in 2-2.5 Acres, Nidhivan means "Forest of Tulsi", or "'Forest of treasure" is surrounded by trees with entwined branches, bending towards the ground, giving the place an eerie, almost ghostly appearance. Many find it strange that the land is parched, yet the trees are green throughout the year.

The doors to Nidhivan are closed every evening at 8 pm, when neither devotees nor priests are allowed to stay at the premises.

Nidhivan is sacred to Radha Krishna devotees. It is believed that "Lord Krishna & Radha still dance in this place after mid-night and sleep in the 'Rang Mahal', situated in the Nidhivan premises. Prasad of 'Makhan & Mishri' is offered to Him & a bed is prepared every day. In the morning it appears that Prasad has been eaten and somebody slept on the bed too." 1

Since the premises are closed and no one is allowed to stay there in the evening, it is challenging to learn what happens here after dark.

"All the local guides of this place inform the visitors that anybody who watches the dance of Lord Krishna & Radha becomes incapacitate and is unable to describe what he or she has seen. That's why nobody stays hereafter 8 pm and even birds & animals leave this place and the premise is locked. It is believed that whosoever stays overnight gets salvation and 'Samadhis' of all such people are built here.

Local guides further inform us that there 16000 entwined trees in the premise, which all become quens of the Lord Krishna every night to dance with Him. Lord Krishna &

Radha take rest in the Rang Mahal after dance. The local tooth brush made from Neem Tree is found wet and recently used when the lock is opened at 5.30 am every morning. One also finds the room of Rang Mahal as someone might have stayed overnight there." 1

There are several houses in the vicinity of Nidhivan and people who live there could easily look through the windows to see what happens at the site after sunset. Still, no-one dares to do so because those few who had the courage and tried to observe the closed premises have either lost their sight or mental balance or, in worst cases, both.

Locals have been so frightened that they even sealed their windows with bricks, preventing anything outside from entering their homes after dark.

There are stories of people who secretly stayed at the Nidhivan premises and "decided to remain hidden to watch the mysterious Ras Leela. Unfortunately, those who have attempted such a thing have lost their sight, speech or even worse mental soundness." 2

Some have even died, and the place is so frightening that even the monkeys leave in the evening. 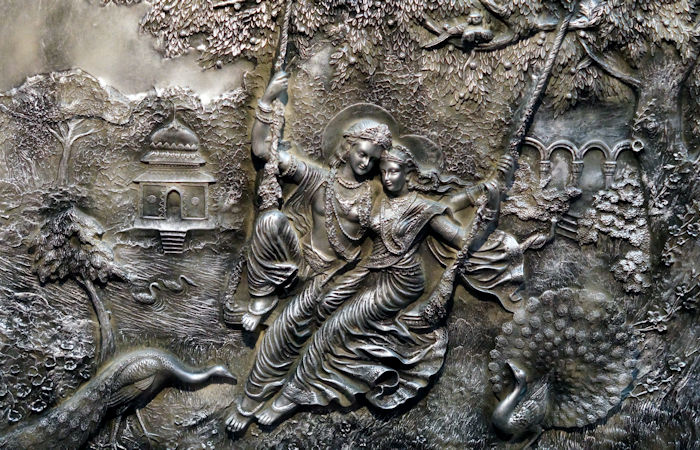 Much can be said and speculated about this mysterious place. However, to devotees, the "Forest of Treasure" is a sacred site where the eternal Raas still "takes place every night in Nidhivan where trees turn into Gopis, each organism which has breath, leaves the place and then a blissful dance sneaks its way." 3

Attempts to investigate what happens at night have been made, but there are few answers. According to Kalinga TV, "renowned historians and scientists have visited Nidhivan to unravel the mystery but all of them went away empty-handed.

A foreign media house had once placed a CCTV camera inside the forests to record any supernatural occurrence taking place at night.

But they were surprised in the morning when it was discovered that nothing has been recorded by the cameras, which were working perfectly fine.

While it remains a matter of debate whether Krishna Rasleela actually happens in Nidhivan every night, the entire legend is nevertheless a reflection of the rich culture and religious heritage of India." 4

The residents of Nidhivan are deeply religious people, and they are convinced Lord Krishna & Radha do not want to be disturbed during the night dance.

Those who visit the site should respect peoples' beliefs regardless of whether they share them or not. Nidhivan is a truly fascinating place.