A. Sutherland  - AncientPages.com - In Norse mythology, Aegir (Ægir) was the ancient jotun lord of the sea, who belonged to a primeval order of gods, predating the Aesir, the Vanir, and the giants, dwarfs, and elves. 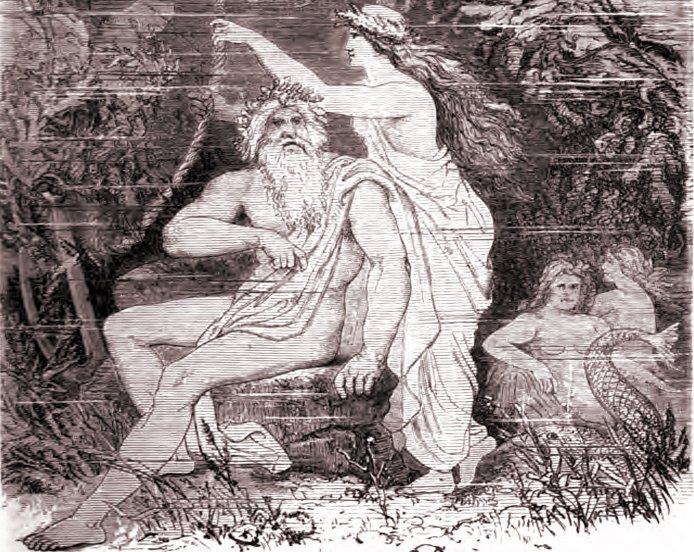 “Aegir and Ran.” Aegir sits and rests his arm on a stone, while his wife Rann pulls on a rope connected to an anchor.  Mermaids lounge in the background.  Source

Fathered by the great giant Ymir, Aegir was considered omnipotent within his realm. He was the one who existed before them, and he would survive long after they died.

Aegir was usually portrayed as an older man with long white hair and clawlike hands. He lived in a great hall in coral caves beneath the island of Hlesey, (probably the island of Laeso ("Isle of Hlér" “Island of Hlér,”) which is the largest island in the North Sea bay of Kattegat, Denmark.

He was a personification of the ocean, often compared to the 'greedy destroyer' in the poetry of seamen and sailors.

In legends of the Anglo-Saxon people, the sea-god Aegir was known as 'Eagor'. He was also known as Hler ('the shelterer') among the Northern nations, and of Gymir ('the concealer'). He was a good friend of the Aesir gods and according to legend, Aegir and Ran organized exquisite underwater banquets for drowned men and gods, in the depths of the sea.

However, it was not always so.

“At first, he was no friend of the Aesir. Thor, however, intimidating him with piercing eyes, constrained him to give a banquet for the gods each winter in his own hall; later, he, in turn, paid visits to the Aesir, who received him in a friendly manner. His banquets were in very truth merrymakings, at which ale flowed of its own accord; his hall was lighted by gleaming gold instead of candles; his brisk serving men, Eldir and Fimafeng, ministered to the guests…”  1

In his 'Skáldskaparmál' (or 'language of poetry'), the second part of the Younger Edda, Snorri Sturluson says that Aegir lived with his sister-wife, Ran. The couple had two servants, Eldir and Fimafeng, and nine beautiful giantess daughters (the Wave Maidens) who wore veils and white robes. 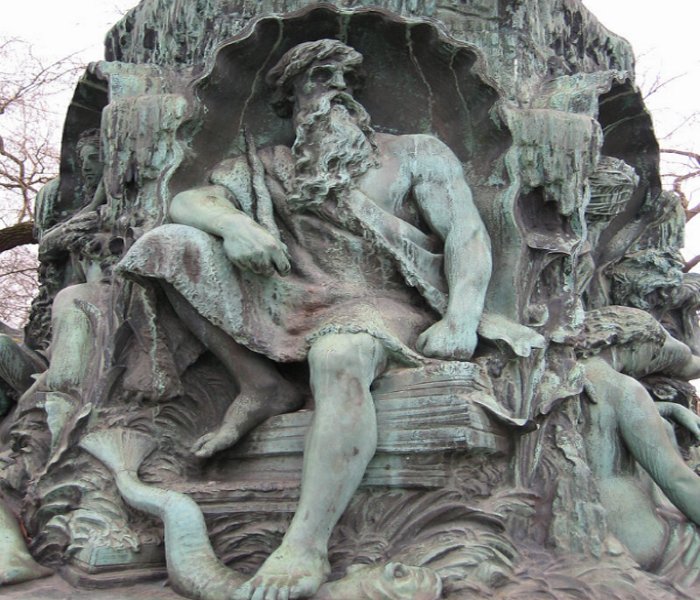 Fountain of JP Molin at Kungsträdgården in Stockholm, 1866. Source

It was Odin who mated with them simultaneously to produce Heimdallr, who guarded the Asgard and illuminated the world. The nine daughters of Aegir were his foster mothers. Number nine was of great importance for ancient cultures and their beliefs.

There were nine muses, and Hydra, the mythological monster, had nine heads. During the Han Dynasty, cosmology was based on the number nine for a time very popular Sheol - "nine sources" - The Abode of the Dead. It was believed that Nine Unknown Men, were guardians of forbidden knowledge hidden from humanity. In Chinese beliefs, Phoenix was the nine-headed bird (“Jiu Feng”), a monster in Chinese mythology.

There was a time when the Vikings, the masters of the sea,  strongly believed in Njord, Aegir, and his wife, Ran. Njord was responsible for the sea in the vicinity of the shore, the wind off the sea, fishing, and trade. His duty was also to calm down dangerous storms created far out at sea by Aegir.

Aegir was revered and feared by sailors experiencing furious storms on the sea. They believed that Aegir – usually angry and hostile - would occasionally appear suddenly to take ships, boats, men, and cargo with him to his underwater domain at the bottom of the ocean.

Ran was even more dangerous, who used to lurk behind the ice masses and was always ready to suddenly attack. She used a net to entrap seafarers from the decks of their ships. She was frequently seen drowning sailors and pulling them down to a grave beneath the sea's waves, where she ruled with her husband, Aegir.

Ran was believed to be the goddess of death for all who vanished at sea. One legend has it that sailors who died might reappear at their funeral feasts if the goddess Ran was particularly eager to give them hospitality in her halls. Seamen who went overboard bearing gold were particularly welcomed by Ran, who loved gold because it lighted her underwater realm.

Even if they were not her favorites, she wasn’t unfriendly. As at Odin’s Valhalla, the mead was served at will in the halls of the goddess Ran.

Aegir was a divine ruler of the sea. Ancient people associated with the sea depended on him and his terrible mood. Their faith in Aegir was based on fear; the crews of merchant and fishing boats usually had to navigate far from the shore and home.

They needed a safe journey across the sea; nobody had to remind them that they should always plead to Aegir.

Guerber H. A. Myths of the Norsemen: From the Eddas and Sagas