A. Sutherland - AncientPages.com - One of the earliest forms of the Chinese Phoenix is the nine-headed bird (“Jiu Feng”), a monster in Chinese mythology. 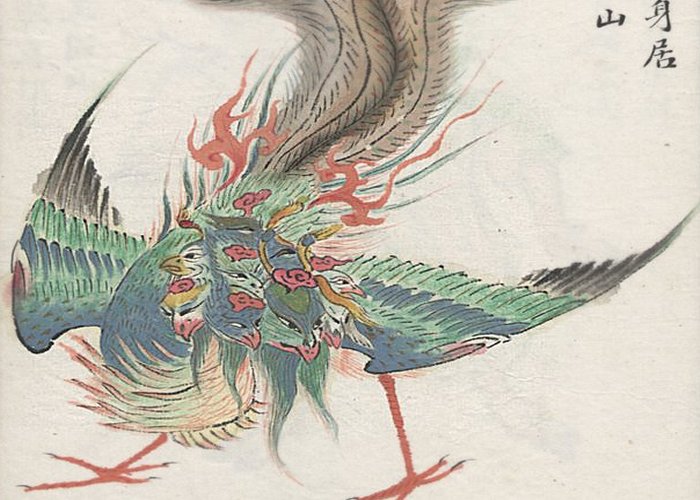 Qing-dynasty (1644-1911) print shows the nine-headed phoenix, a being from Chinese mythology. Image via World Digital Library

The royal family of Chu is considered descendants from the Yellow Emperor, a deity in Chinese religion, one of the legendary Chinese sovereigns and culture heroes, credited with invention of Chinese medicine, religious practices, including worship of the sun, moon, and five planets; and technological inventions, like the compass and calendar.

"Nine Phoenix" was one of the most commonly worshiped mythical and divine creatures (another one was the Chinese dragon) in Chinese history and is mentioned in the Classic of Mountains and Seas (Shanhai jing) dated to the 4th century BC.

According to ancient beliefs, the nine-headed bird is a rare creature because it has nine brains and is very intelligent. It has also the ability to foresee the future.

People in China use to say that someone is as intelligent as the ‘nine-headed bird’; on the other hand, this term may have a negative and insulting meaning because it characterizes a person as cunning, unscrupulous and treacherous.

Later, during the Han Dynasty (202BC~220), the bird was often described as a monster, a creature of ill omen and often considered as a demon in Chinese myths and legends.

One legend has it that the Nine-headed bird – a terrifying creature and the arch-nemesis of the hero -  used to causes great suffering by kidnapping young girls and letting them die of hunger in its lair. Finally, a hero managed to kill the monster bird with the help of a kidnapped princess.

The number ‘nine’ was long believed to possess mysterious power in Chinese culture and remains a lucky number in China. Despite some ancient legends and myths, even the legendary nine-headed bird is believed to be a symbol of wisdom and good fortune.

Copyright © Ancientpages.com  All rights reserved. This material may not be published, broadcast, rewritten or redistributed in whole or part without the express written permission of AncientPages.com