Conny Waters - AncientPages.com - A small piece of papyrus that was excavated on the island of Elephantine on the River Nile a little over 100 years ago, has been studied by researchers using among others non-destructive techniques at BESSY II.

Researchers from the Egyptian Museum and Papyrus Collection, Berlin universities and Helmholtz-Zentrum Berlin focused on a blank patch that found on the small piece of papyrus. 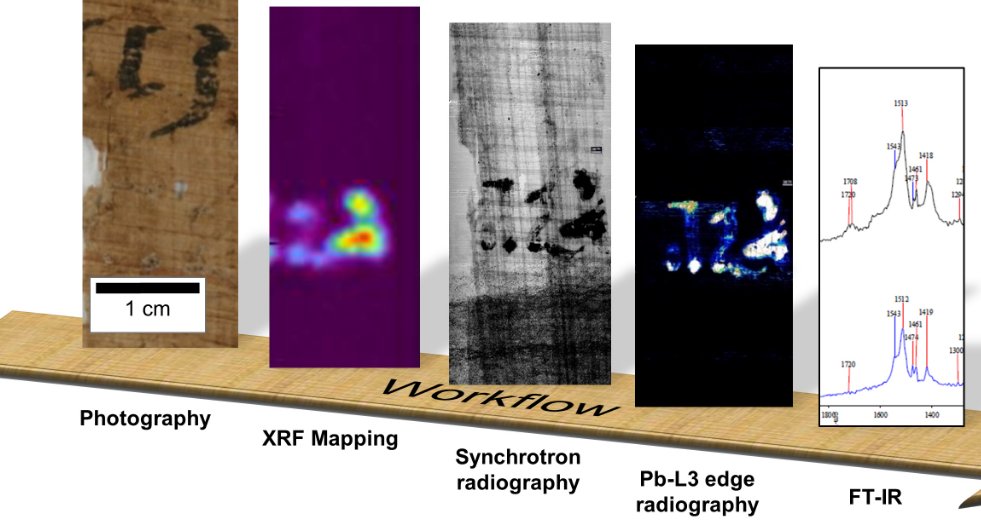 A team of researchers examined an ancient papyrus with a supposed empty spot. With the help of several methods, they discovered which signs once stood in this place and which ink was used. © HZB

For more than a century, the ancient papyrus (along with other artifacts) was stored at the Egyptian Museum and Papyrus Collection Berlin, all of which were excavated by Otto Rubensohn from 1906 to 1908 from an island called Elephantine on the River Nile in the south of Egypt, near the city of Aswan.

Eighty percent of the texts on the papyrus in these containers have yet to be studied, and this can hardly be done using conventional methods anymore.

Thousands of years ago, the Egyptians would carefully roll up or fold together letters, contracts and amulets to a tiny size so that they would take up the least possible space. In order to read them, the papyri would have to be just as carefully unfolded again.

“Today, however, much of this papyrus has aged considerably, so the valuable texts can easily crumble if we try to unfold or unroll them,” Prof. Dr. Heinz-Eberhard Mahnke of Helmholtz-Zentrum Berlin and Freie Universität Berlin said in a press release.

To test the fragile papyrus, researchers used  X-ray fluorescence to analyse sensitive specimens without destroying them.

Scholars in ancient Egypt typically wrote with a black soot ink made from charred pieces of wood or bone and which consisted mainly of elemental carbon.

"If the ancient Egyptian scribes had used such a “metal ink” to inscribe the part that now appears blank on the Elephantine papyrus, then X-ray fluorescence should be able to reveal traces of those metals. Indeed, using the equipment in their laboratory, the researchers were able to detect lead in the blank patch of papyrus."

“We suspect the characters may originally have been written in bright minium (red lead) or perhaps coal-black galena (lead glance),” says Heinz-Eberhard Mahnk.

If such inks are exposed to sunlight for too long, the energy of the light can trigger chemical reactions that alter the colors. Even many modern dyes similarly fade over time in the bright sunlight. It is therefore easily conceivable that, over thousands of years, the bright red minium or jet black galena would transform into the invisible lead carboxylate, only to mystify researchers as a conspicuously blank space on the papyrus fragment.

The new study introduces future studies to decipher texts even on finely folded or rolled papyri from the Egyptian Museum without having to unfold them and risk destroying the precious finds. The researchers namely developed a new technique for virtually opening the valuable papyri on the computer without ever touching them.