Kawai examined both Tutankhamun’s chariot and sunshade and suggests the sunshade of Tutankhamun was a part of the boy king’s chariot, to protect him from sun’s heat while hunting or playing sports. 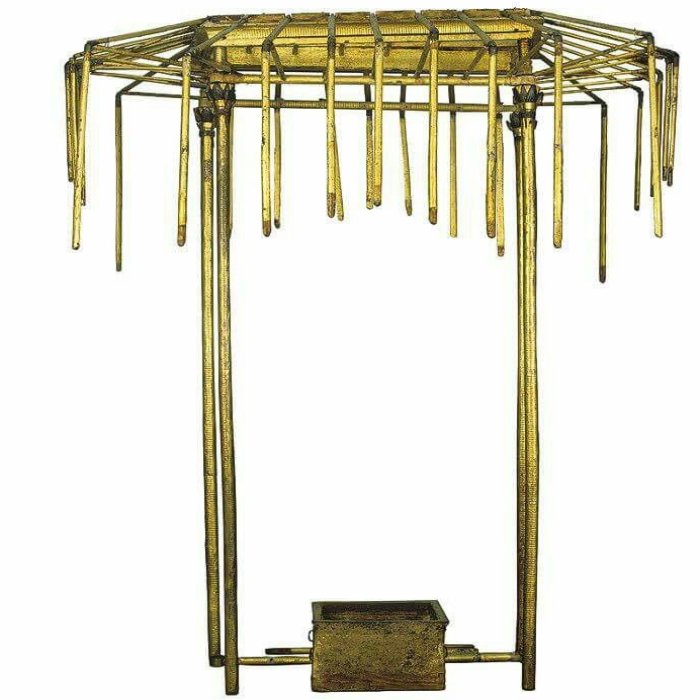 Did Tutankhamun’s chariot have sunshades? Image via Ahram Online

The investigation was conducted before the sunshade along with 155 other artefacts, were transported to the new Grand Egyptian Museum on the Giza Plateau.

The examination and X-rays carried out on the chariot and the sunshade show that both structures may have been fixed together. It would mean that the sunshade from the beginning, was part of the chariot.

This sunshade is a testimony to the ancient Egyptian craftsman's creativity and ingenuity.

Made of four poles of gilded wood and shaped like a lotus flower, it opens and closes via copper devices and a system of wiring or linen strings that stretch its hanging parts by opening tiny hinges. The framework would have had a textile cover when in use.

The four poles were fixed in holes drilled in the wooden base for stability.

Further studies will be carried out to find out more.

Did Two Daughters Of Akhenaten Rule Together Under One Name Before Tutankhamun?

Tutankhamun Had An Ancient Dagger From Outer Space

Eissa Zidan, director-general of the first aid restoration department and transportation at the GEM, informed that the GEM received a collection of 155 objects, among the most important of which were Tutankhamun’s sunshade, a statue of king Amenemhat III (a pharaoh of the Twelfth Dynasty of Egypt, who ruled from c. 1860 BC to c. 1814 BC) and a collection of artefacts from the reign of Alexander the Great and both Kings Ptolemy I and II.

Zidan said that the sunshade is the last piece to be transported within the framework of an Egyptian-Japanese project to transport and restore 72 objects from the Egyptian museum in Tahrir to the GEM with the support of JICA.

All the objects were restored before packing in order to strengthen the weak parts as well as using a special kind of packing free of alcohol and materials that absorb humidity.

The objects are now at the wood lab in the GEM for more restoration before display within the Tutankhamun collection when the museum opens in 2020.