Conny Waters - AncientPages.com - Depictions of animals are a common subject for the world’s oldest dated rock art, including lions in France’s Chauvet Cave and wild bovids in Indonesia.

A two-meter-long painting of a kangaroo in Western Australia's Kimberley region has been identified as Australia's oldest intact rock painting. 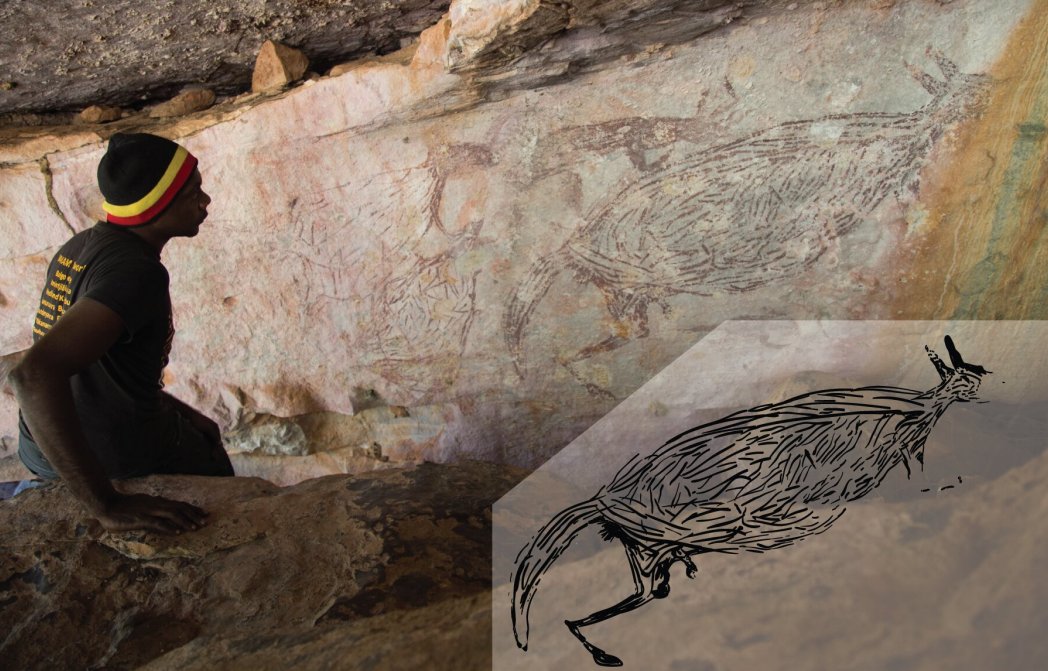 Traditional Owner Ian Waina inspecting a Naturalistic painting of a kangaroo, determined to be more than 12,700 years old based on the age of overlying mud wasp nests. The inset is an illustration of the painting above it. Image credit: Peter Veth and the Balanggarra Aboriginal Corporation, Illustration: Pauline Heaney

Using the radiocarbon dating of 27 mud wasp nests, collected from over and under 16 similar paintings, a University of Melbourne collaboration has put the painting at 17,500 and 17,100 years old.

"This is a significant find as through these initial estimates, we can understand something of the world these ancient artists lived in. We can never know what was in the mind of the artist when he/she painted this piece of work more than 600 generations ago, but we do know that the Naturalistic period extended back into the Last Ice Age, so the environment was cooler and dryer than today."

The Kimberley-based research is part of Australia's largest rock art dating project, led by Professor Andy Gleadow from the University of Melbourne. It involves the Balanggarra Aboriginal Corporation, the Universities of Western Australia, Wollongong, and Manchester, the Australian National Science and Technology Organization, and partners Rock Art Australia and Dunkeld Pastoral.

Published today in Nature Human Behaviour, Dr. Finch and his colleagues detail how rock shelters have preserved the Kimberley galleries of rock paintings, many of them painted over by younger artists, for millennia—and how they managed to date the kangaroo rock painting as Australia's oldest known in-situ painting.

The kangaroo is painted on the sloping ceiling of a rock shelter on the Unghango clan estate in Balanggarra country, above the Drysdale River in the north-eastern Kimberley region of Western Australia.

Earlier researchers looked at the stylistic features of the paintings and the order in which they were painted when they overlapped, and were able to work out from there that the oldest style of painting is what's known as the Irregular Infill Animal or the Naturalistic period, which often features life-size animals. This kangaroo is a typical example of paintings in this style.

Dr. Finch said it was rare to find mud wasp nests both overlying and underlying a single painting. For this painting, they were able to sample both types to establish the minimum and maximum age for the artwork.

"We radiocarbon-dated three wasp nests underlying the painting and three nests built over it to determine, confidently, that the painting is between 17,500 and 17,100 years old; most likely 17,300 years old."

Dr. Sven Ouzman, from University Western Australia's School of Social Sciences and one of the project's chief investigators, said the rock painting would unlock further understanding of Indigenous cultural history.

"It's important that Indigenous knowledge and stories are not lost and continue to be shared for generations to come," Ms. Gore-Birch said. "The dating of this oldest known painting in an Australian rock shelter holds a great deal of significance for Aboriginal people and Australians and is an important part of Australia's history."

The next step for the researchers, who are aiming to develop a time scale for Aboriginal rock art in the Kimberley, is to date further wasp nests in contact with this and other styles of Kimberley rock art to establish, more accurately, when each art period began and ended.