David Tee - AncientPages.com - The Temple Mount is probably the most fragile place on earth.

It is also the most incendiary site as well. Managed by the Islamic Waqf, the Temple Mount holds the dome of the rock which itself stands on the probable site of Solomon’s and Herod’s temples.

Any disruption to the site and its Islamic heritage could start a holy war of enormous proportions. Yet archaeologists still say that Solomon’s and Herod’s temples were built there in preceding millennia.

Herod’s Temple Was Not Solomon’s

If we want to get technical, Herod’s temple has been seen as the 3rd temple. Solomon’s was first, then it was destroyed by the Babylonians when they conquered Jerusalem in 587 BC. 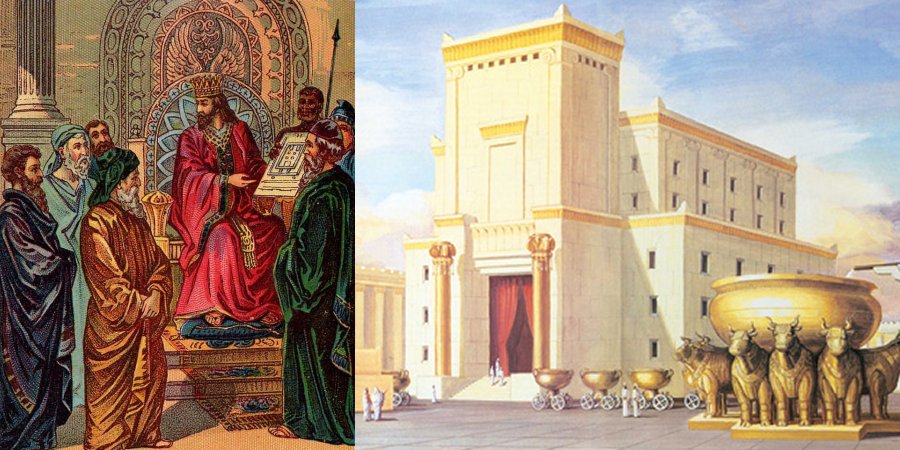 Left: Solomon and the plan for the First Temple, illustration from a Bible card published by the Providence Lithograph Co. Credit: Public Domain - Right: Artist's interpretation of the first Temple in Jerusalem. Credit: Israel Truths

Zerubbabel rebuilt it around 520 BC, (see Ezra 4 & 6), and then in the last years of the 1st century BC and the beginning years of the new millennia, Herod rebuilt Zerubbabel’s temple. Herod’s version was the one in use during the life of Jesus.

The temple area supporting Solomon’s temple was enlarged by Herod. It should be mentioned that Solomon had to build a special area to hold his temple when he started construction. That location was near or on Mt. Moriah, the mountain Abraham went to in order to obey God and sacrifice Isaac.

The greatest mystery that comes with Solomon’s temple is that no one knows what it looked like. The Bible does contain descriptions of the building but through the years those architectural terms have lost their meaning.

Then there are a lot of details absent from the biblical text. While we get great detail on some of the contents of the temple, generalities prevail when it comes to the overall size and dimensions of the building.

The closest example of what his temple may have looked like comes from Syria. The Ain Dara temple is the only building known today that resembles the description given in the book of Kings. Sadly, the archaeologist who excavated this site was Syrian and he wrote in German. This may be the reason why it has received such little attention.

Some people may ask, why not just go and dig up the temple and see for yourselves? But that is impractical and also highly dangerous. As stated earlier, Solomon’s temple lies underneath the Islamic holy site, where they claim Mohammad ascended into heaven. 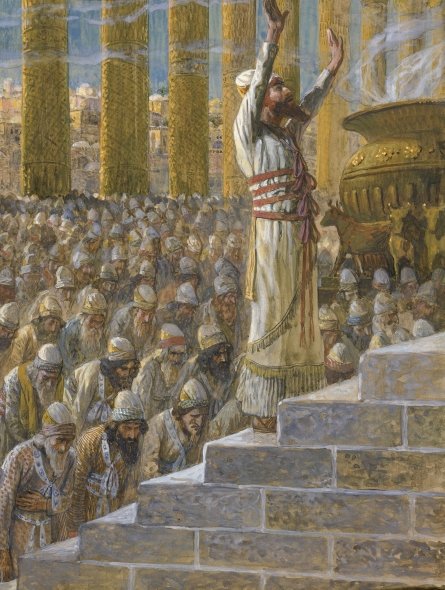 Any digging at the site would contaminate the sacred nature of the Dome, undermine its foundations and anger the Muslim people worldwide.

The second difficulty is that Herod changed the temple area and it is not known exactly where Solomon’s temple stood. Plus, the renovations and rebuilding would alter how Solomon’s temple originally looked.

The scholars are not sure if Solomon’s temple had one, two or three rooms. It would be difficult to assess what was uncovered and attach it to Solomon, Zerubbabel or Herod.

All Is Not Lost

Writing just before she died, Kathleen Kenyon stated that no part of Solomon’s temple survives today.  She may be right as the wailing wall is from Herod’s temple not Solomon’s.  We say may because there is a scholar who disagrees with her.

Ernest-Marie Laperrousaz does agree that the north, south and west containment walls originally built by Solomon are deeply buried under Herod’s construction and extension work.

But he points out that Herod could not touch the eastern wall because it Solomon built it on the edge of the steep hill leading down to the Kidron Valley. It would be impossible for Herod to bury this part of the wall.

A portion of Solomon’s work and temple may yet survive.

Due to the work of the temple sifting project, many items from the first temple era have been uncovered. Most of these discoveries are broken pottery, animal bones etc. The most highly debated of all the discoveries is the ivory pomegranate.

This 1 ½ by 1-inch scepter top may be the only surviving relic from Solomon’s temple. But its authenticity has been debated since the 1980s. This discovery may not solve the mystery surrounding Solomon’s temple, but it helps prove that the structure did exist.

The Temple and the Rock by Leen Ritmeyer