A. Sutherland  - AncientPages.com - The astonishing Basilica Cistern or the "Sunken Palace" is located underneath the streets and houses of Istanbul, Turkey. It is a marvelous hidden subterranean world decorated with two Medusa heads.

In 1545 Peter Gyllius, a Frenchman visiting Constantinople heard remarkable stories of locals drawing up fresh water and even fishing from holes in their cellars. He became so intrigued by these fascinating stories and the legends of great underground temples, that he decided to explore and find this enigmatic place. 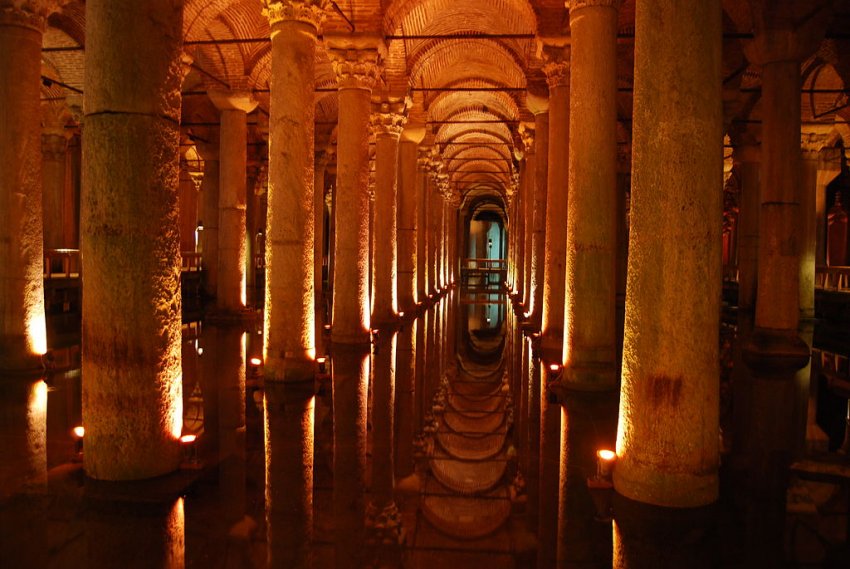 Upon further investigation, he rediscovered a subterranean marvel, the largest of the long-forgotten palatial cisterns of the Byzantine Empire. Fish swam in an artificial freshwater lake the size of two football fields and the vaulted brick ceilings were held up by 336 thirty-foot pillars taken from nearby Roman ruins.

The Basilica Cistern was founded in the 6th century during the reign of Justinianus I, of the Byzantine Empire (527-565). Built on the site of an early Roman basilica, the cistern was nicknamed the "Sinking Palace" by locals. The Roman columns rising from the pools of water in the Basilica Cistern certainly give the impression of a once marvelous residence, slowly succumbing to a watery grave.

The cistern is located 500 feet (150 m) southwest of the Hagia Sophia on the peninsula of Sarayburnu, a very ancient place where the first settlement dates back to Neolithic, c. 6600 BC. 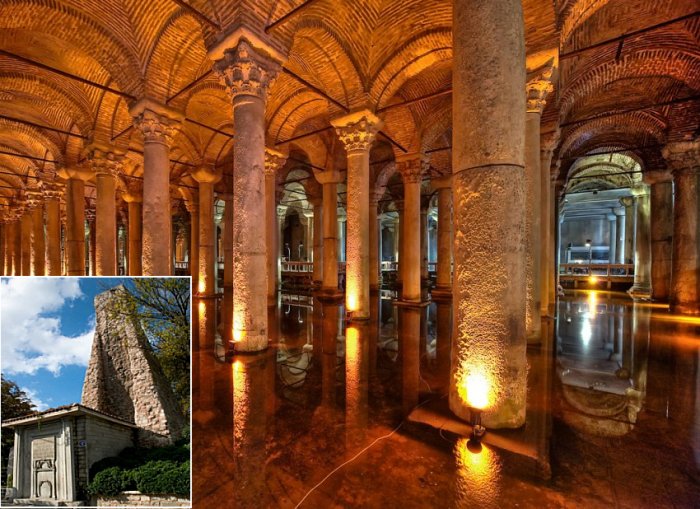 The cistern lies underground, just below the tram lines and busy streets of Istanbul's Old Town. The largest of several hundred cisterns below the surface of Istanbul has 336 massive columns made of granite and marble that support a space large enough to hold 27 million gallons of water (carried in from 12 miles away via clay pipes and aqueducts).

Palace once held an emergency water supply for all of Constantinople, but today has been drained, save a foot or two of rainwater teeming with goldfish.

Inside there are two giant Gorgon-head pillar bases that pose a mystery. It is suspected that they may have been pulled out of an older pagan temple, where motifs of the famous Gorgon Medusa were used as a protective emblem.

Both heads are casually used as column bases; one positioned upside down, the other tilted to the side. 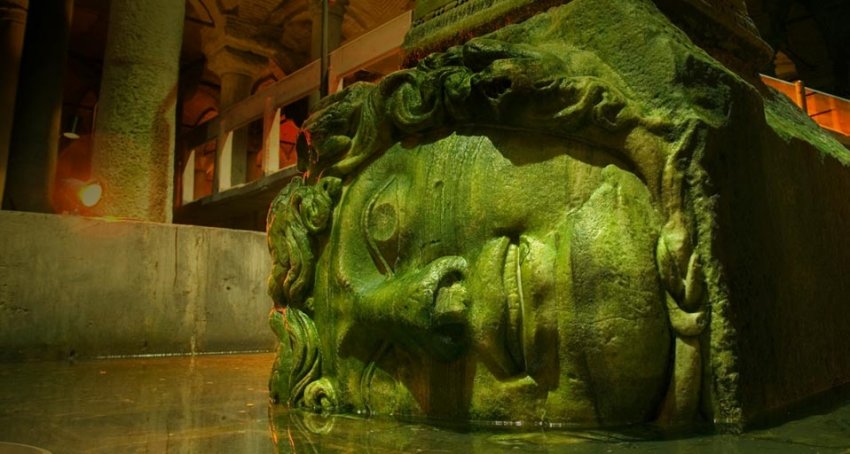 One of the Gorgon heads. Image credit: Exploitrip

It is suspected that they may have been pulled out of an older pagan temple, where motifs of the famous Gorgon Medusa were used as a protective emblem. It is possible that the placement of these two faces - upside down and sideways, at the base of pillars - may have been a deliberate display of the power of the new Christian Empire.

This particular location of the Medusa heads in the cistern has long been a question of scientific discussion. All we have today are many guesses, and the best of them is that perhaps ancient people believed that if the sculptures were placed in two different positions (upside down and sideways), they would ward off evil spirits.

Medusa, a sea nymph, was the most beautiful of the three gorgon sisters. She was courted by Poseidon and made love to him in a temple of Athena. 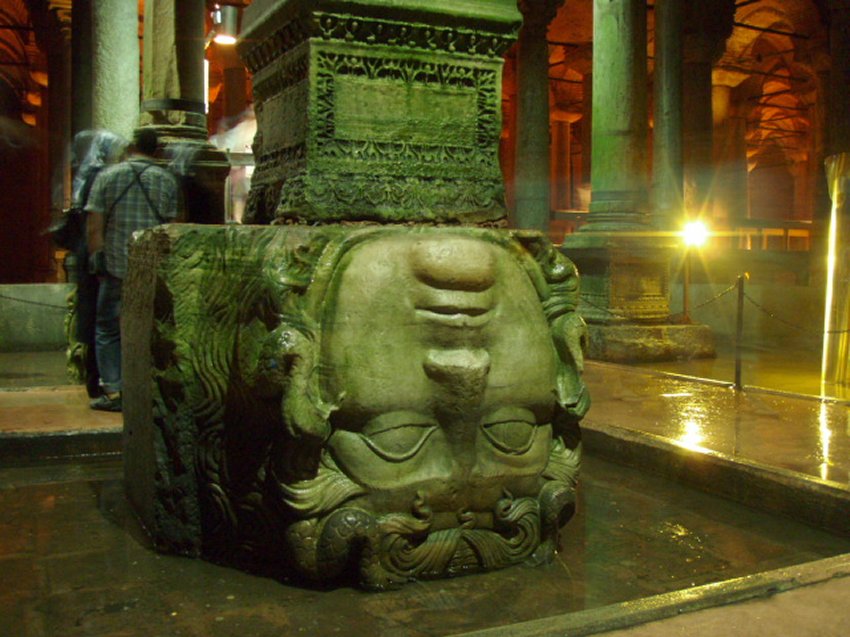 The second head was placed upside down.

The Goddess Athena was furious and transformed Medusa into a monstrous chthonic beast with snakes instead of hair, whose frightening face could turn onlookers to stone. She was beheaded while sleeping by the hero Perseus, who thereafter used her head as a weapon until giving it to the goddess Athena to place on her shield.

Having coupled with Poseidon previously, two beings sprang from her body when she was beheaded. One was a winged horse Pegasus that was later tamed by Bellerophon to help him kill the chimera. The other, Chrysaor of the Golden Sword that remains rather unknown today. In classical antiquity and today, the image of the head of Medusa finds expression in the evil-averting device.

The mystery of the Medusa heads trapped under the cistern's columns may never be fully understood. The cistern was cleaned and renovated in 1985 by the Istanbul Metropolitan Municipality and opened to the public in 1987.

The Mystery of the Sinking Palace

The Basilica Cistern, the Coolest Spot in Town