A. Sutherland - AncientPages.com - The Sacred City of Caral is very old, and its age is comparable to the early civilizations of Mesopotamia, Egypt, China, and Mesoamerica.

Impressive pyramids that rise high above the ground, a sunken circular plaza, an amazing amphitheater, and public gathering places make the ruins of Caral very special.

The pyramids of Caral were built as early as about 2600 BC. The construction of these buildings is estimated to have continued until about 2000 BC. This makes them of age comparable to the Pyramids of Giza and Cheops in Egypt, built between 2600 and 2480 BC. 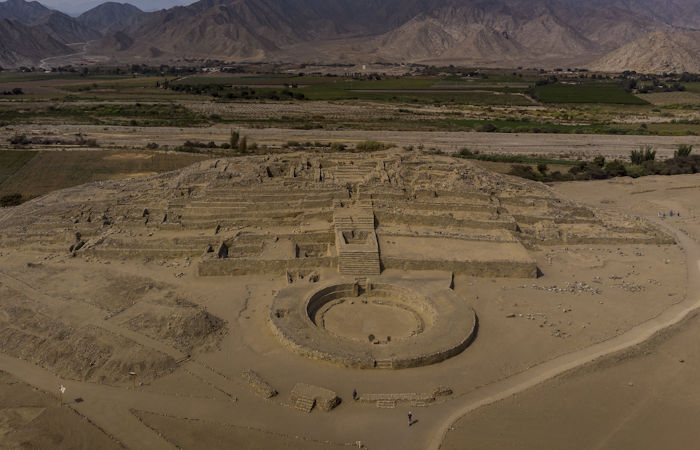 Architects and engineers seeking solutions for sustainable living in the 21st century carefully study the remains of the ancient city of Caral in Peru, an engineering wonder built approximately 5,000 years ago.

Caral's builders created a city of pyramids, sunken amphitheaters, seismically resilient buildings, and underground ducts that channeled the wind to keep their fires burning all with basic tools.

No Trace Of Warfare Was Found

No trace of warfare has been found at Caral; no battlements, no weapons, no mutilated bodies. Archaeological findings from the area suggest it was a gentle society built on commerce and pleasure. In one of the pyramids, they uncovered 32 flutes made of condor and pelican bones and 37 cornets of deer and llama bones. Among the artifacts unearthed at Caral is a knotted textile piece that the excavators have labeled a quipu.

The Caral or Norte Chico Civilization is considered the oldest known civilization in the Americas,  which developed from 3000 to 1800 BC.

The city of Caral -enclosing an area of more than 60 hectares (150 acres) with 3,000 inhabitants - represents the work of one of the most important civilizations on our planet. the organized work of its inhabitants created Caral. Apparently, they were skilled builders and engineers. Only a few people know that the Sacred City of Caral was built in Peru as long as  4400 years before the Incas ruled.

Sophisticated Civilization And Its Ingenious Designs

The ancient city of Caral is known for its sustainable urban planning, including an elaborate complex of temples, ordinary houses, an impressive amphitheater, and the people living in harmony with nature.

One of many engineering achievements of the Caral people were the ducts Caral used to supply air to fires used in religious ceremonies and keep them burning. According to experts who investigated the structures in the area, the system depended on what modern physicists today call the Venturi effect, the reduction in pressure when a fluid flows through a constricted space. It was certainly one of several ingenious designs of these ancient people. 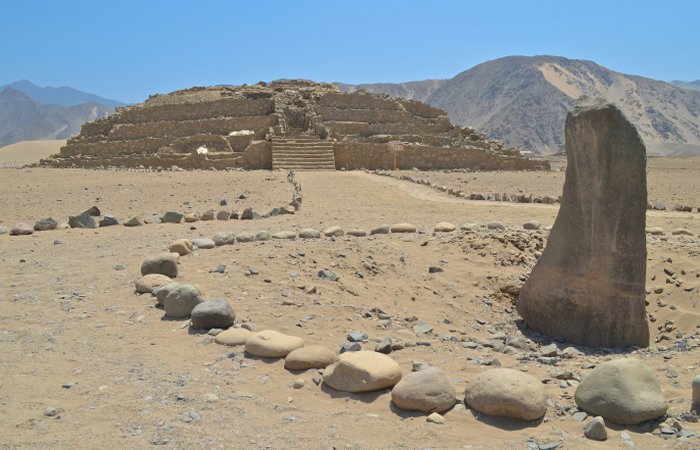 A pyramidal building in what was once the city of Caral. Credit: Adobe Stock- Mark

Another great technological achievement of the Caral people is related to as many as 50 rívers running from the Andes. Their life, agriculture, and development depended on these rivers.

However, only three of them were able to carry water year-round.

"... This meant not only that extensive irrigation systems were required to support growing populations but that the systems had to originate in the mountains and that several had to be connected via canals in order to ensure a sufficient flow of water during the growing season. These irrigation canals, which allowed farming to develop in the river valleys, along with ceramics, textiles, metallurgy, tools, architecture, and roads reveal the extraordinary talents and achievements of these peoples, which continue to be uncovered…." writes Tommie S. Montgomery in her book "Before the Incas: Archaeological Sites of Coastal Peru".

Buildings in the city, which is in a seismically active area, also feature flexible foundations called "shicras" that resemble large baskets filled with stones, a technique that minimized earthquake damage.

Caral's inhabitants built the city on arid land to preserve fertile ground for farming and represented a peaceful society, interested in developing in harmony with nature. 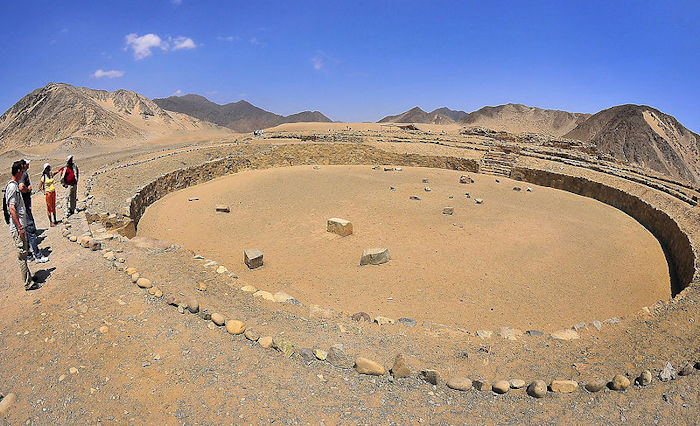 The city may also have been the birthplace of Quechua, which became the language of the subsequent Inca empire and is still alive today. Credit: Petty Officer 3rd Class Daniel Barker - Wikipedia

Caral sits in the Supe Valley, in a semi-arid region about 200 kilometers (125 miles) north of Lima, just inland from the Pacific Ocean. The horizon is dominated by seven stone pyramids that appear to light up in the sun.

The city is built around two sunken circular plazas, and excavations indicate there were regular markets that drew traders from across a wide region. Fishermen and farmers would trade their goods for flutes made of condor bones, or for shells from as far away as modern-day Ecuador to make necklaces.

Caral's culture achieved much along with prestige and splendor. The city was probably the birthplace of Quechua, which became the language of the following Inca empire and is still alive today.

Caral was hit by a long drought around 1800 BC, forcing residents to abandon the area. After they left, the city was buried in the sand.